While the Greek capital counted losses last month in bookings and revenue due to violent protests at Syntagma Square in late June that resulted to some 20,000 cancellations in 21 central hotels in Athens, tourism traffic for the rest of Greece showed positive signs.

Deputy Culture and Tourism Minister George Nikitiadis told the Greek press last month that arrivals increased over the last six months and tourism had not been affected by the strikes and unpleasant images of Syntagma Square.

According to data compiled by the Association of Greek Tourism Enterprises (SETE) from 13 of Greece’s major airports for the January-June 2011 period, international arrivals to Greece increased by 9.52 percent compared to last year and amounted to 4,214,220 tourists, up from 3,848,067 in 2010.

In June alone arrivals increased by 15.87 percent compared to last year, which amounted to 1,792,673 tourists.

According to Germany’s international broadcaster Deutsche Welle, although many tourists scheduled to visit the Greek islands were questioning Greece’s safety, German tour operators said there were no indications of cancellations to the country.

“We will see the consequences in the coming weeks, but so far there is no evidence of cancellations,” Katrina Spichala from TUI told the press. 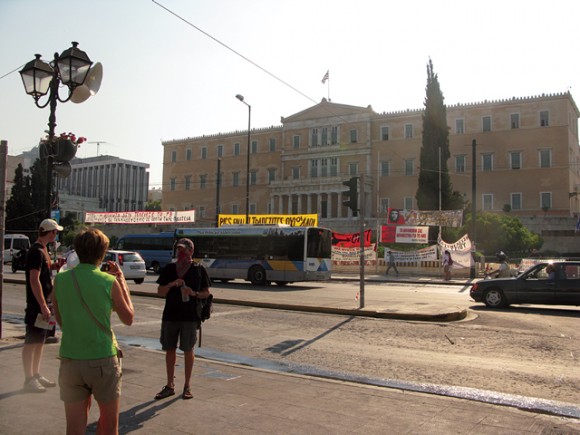 On 30 June, one day after the clashes at Syntagma Square and with teargas still in the air, tourists took photographs in front of the Greek Parliament and anti-austerity signs and banners. According to a tourism expert, incidents and conflicts are limited to Athens so the rest of Greece would not see losses from tourism.

Alltours representative, Alexandra Hoffman, was on the same wavelength when she told the press that the riots in the Greek capital had no direct impact on bookings, as the company’s tour destinations were not Athens or mainland Greece, but the islands and Chalkidiki.

In a recent interview to Turkish media, Culture and Tourism Minister Pavlos Geroulanos said Greek tourism was experiencing major increases in arrivals from markets such as Russia, Turkey and Serbia while traditional markets -Germany and United Kingdom- were coming back following last year’s drop in arrivals.

Mr. Geroulanos added that the ministry is cooperating with the Turkish Culture and Tourism Ministry to attract tourists from China.

“Last year 13,600 Chinese visitors came to Greece, it’s not a large figure but it is a great increase of 75 percent,” he said.

On its part, SETE said the increased tourism demand for Greece this year was due to the recovery of last year’s losses, which occurred due to the violent protests of May (three bank workers died in a fire set by self-styled anarchists), the problems in North Africa and the tension between Israel and Turkey.

The association said other important factors were the decrease of VAT on accommodation services and the facilitation of issuing visas to Russian tourists.

However, while incoming tourism showed a satisfying pace, domestic tourism experienced one of its largest drops in recent years during the first five months of the year, according to figures of domestic air arrivals at Greek airports.

According to press reports, during the January-May period the drop in air arrivals of domestic flights reached 17.2 percent, which translates to a loss of 430,382 arrivals.

In May alone this year, the fall in domestic arrivals reached 3.6 percent, a loss of 18,801 arrivals.

Tourism professionals told the press that this year’s shortfall in arrivals was attributed to the fact that Greeks have drastically reduced their weekend getaways and three-day trips for 2011.

According to press reports, some 60 percent of Greeks will not go on vacation this summer.