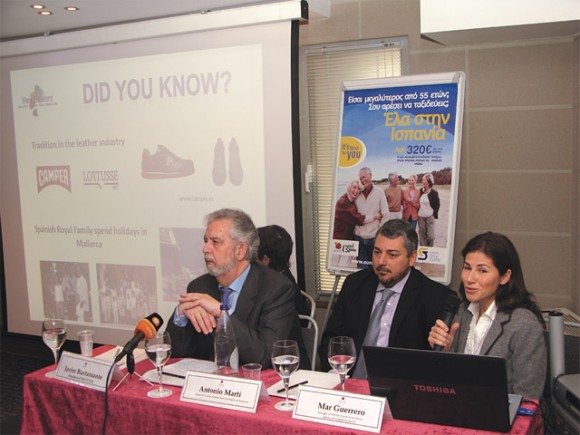 Javier Bustamante, president of tourism and innovation company Segittur (left), accompanied by representatives from Andalusia and the Balearic Islands, during the press conference of the Europe Senior Tourism project.

One in three tourists who visited Spain from October 2009 until April 2010, participating in the Europe Senior Tourism project subsidized by the Spanish government, were from Greece, according to Javier Bustamante, president of tourism and innovation company Segittur.

The Europe Senior Tourism project is an all-inclusive program that offers European citizens over the age of 55 the chance to spend their holidays in Spain during the off-peak tourism season.

According to Mr. Bustamante, during the project’s first period from October 2009 to April 2010, out of the 43,952 seniors that traveled to Andalusia and the Balearic Islands in Spain, 15,254 were from Greece.