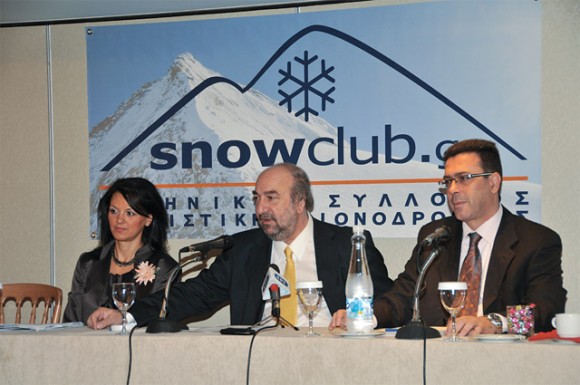 Deputy Culture and Tourism Minister George Nikitiadis (center) with Olga Kotsina, president of the Greek Ski Tourism Association, and Sotiris Yiannopoulos, the association’s advisor. During his speech, Mr. Yiannopoulos said local government and businesses should be approached to support the Greek ski resorts. “This could lead to the development of four-season tourism,” he said.

Chaotic bureaucracy, ski resorts that do not bear the appropriate GNTO seal due to land-use matters and the strong competition from neighboring countries are just some of the problems of Greek ski tourism, experts stressed at a recent forum held in Athens for the development of ski tourism in Greece.

Speaking at the forum, the deputy minister stressed that a meeting with relevant agencies and ski resort representatives would soon be held to analyze the necessary actions required in regards to ski resorts.

“The operation of ski resorts is an issue that is in need of solutions,” Mr. Nikitiadis said referring to problems related to permits and investments in ski locations.

Olga Kotsina, president of the Greek Ski Tourism Association, informed the audience of the major problems Greek ski resorts face today such as outdated facilities and the lack of investment for renovation or expansion of facilities.

Currently 18 ski resorts operate in Greece with 190 kilometers of ski slopes, 110 tourist lifts, 30 of which are overhead, and accommodate a total capacity of some 70,000 people per hour.

It has been estimated that Greek ski centers attract some 500,000 skiers and visitors per ski season.