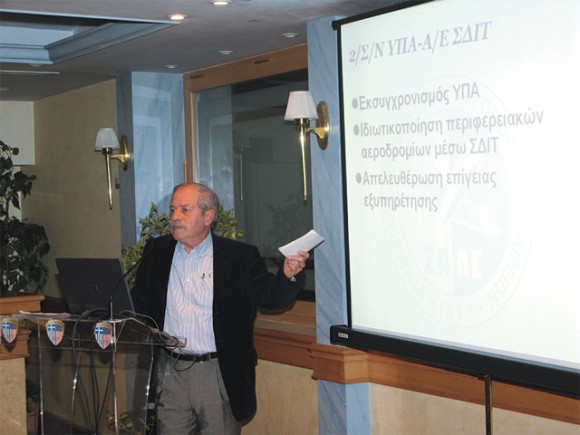 Dinos Frantzeskakis, president of the Hellenic Association of Airline Representatives, during his presentation said the strengthening of low cost carriers by the state should not be at the expense of regular airlines and tour operators.

According to Stavros Daliakas, advisor to Deputy Culture and Tourism Minister George Nikitiadis, the ministry is trying to attract low cost carriers to Greece in an effort to extend the tourism season and boost arrivals.

“The Culture and Tourism Ministry aims for low cost carriers to operate from March to November, which would mean an increase in tourism traffic during the low season months,” Mr. Daliakas said.

“We undoubtedly need to change the existing tourism model -sun and sea- and the strategy of the ministry aims to attract visitors 52 weeks a year,” he said.

In October 2010, Deputy Minister Nikitiadis held a meeting with 18 representatives of international low cost carriers and government officials from regional parts of Greece. According to reports, low cost carriers are planned to receive marketing aid from the regional authorities and hoteliers to enable flights to cover particular destinations.

However, the Hellenic Association of Travel and Tourist Agencies (HATTA) expressed a different opinion on the matter.

The association’s vice president, Makis Ioakimidis, questioned the profits the country would supposedly gain if low cost carriers increased their flights to Greece.

“It is impossible to organize an incentives trip or a conference with low cost carriers and a travel agent can not manage seats of a low cost carrier as their is no cooperation from their end,” he said.

HATTA’s vice president said that Greece must take into account the European experience in regards to low cost carriers.

“In destinations that increased low cost carrier flights, the gradual withdrawal of charter flights was noticed and the hoteliers, who initially were ardent supporters of low cost carriers increasing their frequency, saw a result completely opposite of the one anticipated,” Mr. Ioakimidis said.

On his part, Harry Palogiannidis, general manager of Rhodes Tourism Promotion Organization PROTOUR, speaking as a “tourist destination and not as an aviation expert,” said he agreed with the government’s decision to attract low cost carriers to Greece.

He spoke of the case of Rodos and said that during last summer some 12 low cost carriers made more than 340 approaches to the island per month.

Mr. Palogiannidis underlined that a destination, which faces seasonality problems, has an obligation to find distribution channels that would lengthen the tourism season and serve the destination’s strategic objectives to the next level of expansion, which is winter tourism.

“This is what Rodos did with Ryanair, which at the moment is the only low cost carrier committed through this agreement and will fly to certain destinations on Rodos during the winter,” he said.

“The risk is great for low cost carriers (to fly during low season) and if they help lengthen the tourism season in winter then it is fair for them to seek assistance,” he concluded.

GTP was one of the main communication sponsors of the assembly.