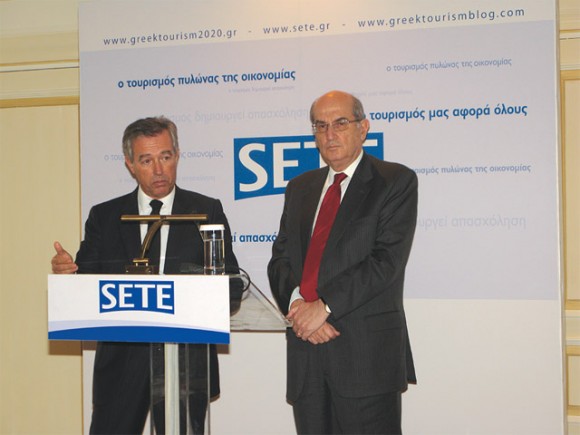 SETE’s vice president, Andreas Andreadis and the association’s president, Nikos Angelopoulos, during the association’s 2010 overview last December. Mr. Andreadis referred to the year’s tourism traffic (2010), which he said would close with almost the same percentage of arrivals in 2009 (0.5 percent drop) but with a significant decrease in terms of revenue (seven percent drop). However, in regards to Greek tourism in 2011, Mr. Andreadis said that under certain conditions it is estimated that this year may mark the beginning of Greek tourism’s recovery.

Deputy Culture and Tourism Minister George Nikitiadis recently announced that legislation on alternative forms of tourism should be completed this year and expressed his hope that 2011 would be the development year for Greek tourism.

Referring to 2010, the deputy minister told the Greek press that last year was no doubt a very difficult year for Greece and tourism as well.

“We struggled hard to stand on our feet and I can say that we achieved it through contacts and meetings at all international tourism fairs, where we succeeded to reverse the negative climate for our country,” he said.

In a brief overview of 2010, the deputy minister referred to the discussions held with low cost carriers to include Greek regional airports among their destinations throughout the year rather than only during the summer.

The deputy minister also referred to the lifting of cabotage restrictions for non-European Union flag cruise ships. “The necessary conditions to make our ports boarding and disembarking destinations for passengers of large cruise ships have been set,” Mr. Nikitiadis said.

He also highlighted that last year some 328,000 Russian tourists visited Greece, which was an increase of 52 percent compared to 2009. Mr. Nikitiadis said the increase was a result of the ministry facilitating the issuing of travel visas for Russian visitors with the increase of visa centers.

In regards to conference tourism, Mr. Nikitiadis said the procedures for the creation of the long-awaited Athens Metropolitan Conference Center within the Tae Kwon Do Olympic venue in Palio Faliro are on track while also 10 local convention bureaus are planned to open.

On the other hand, the president of the Association of Greek Tourism Enterprises, Nikos Angelopoulos, said the Greek Government must change its approach to tourism.

While addressing Greek journalists at the association’s 2010 overview last December, he underlined that the wider public sector unfortunately has not yet understood that tourism is an economic phenomenon.

“It’s an engine for development, a creator of jobs and not just something we do for pleasure one or two weeks in the summer,” he said.

Mr. Angelopoulos referred to the recent reduction on the Value Added Tax for accommodation facilities (announced last November) from 11 percent to the low rate of 6.5 percent. “The VAT cut is a positive development but must be applied to all tourism services,” he said.

On the subject of the recent lifting of cabotage restrictions on Greek seas, Mr. Angelopoulos said that agreements with non-EU flag cruiseships would take effect as of 2012 as the year 2011 is “almost gone”. (The Greek press has mentioned that in March-April 2011 cruise companies will organize cruise itineraries starting from a Greek port.)

Mr. Angelopoulos also referred to the new investment law and noted SETE’s disagreement with the government’s handling of tourism issues and added that the delay of the special zoning plan for tourism was unacceptable.

GNTO Report Turned Over To Justice