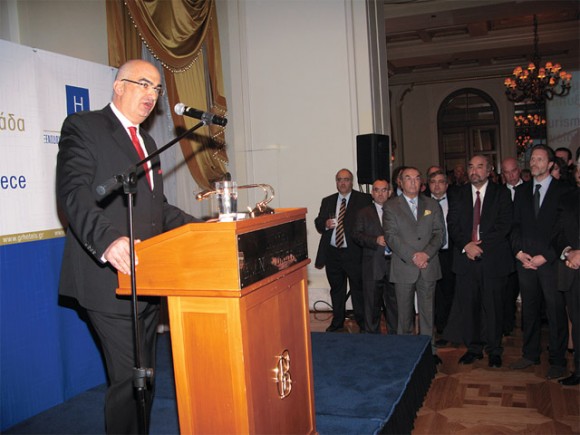 During the Hellenic Chamber of Hotels’ annual pita cutting ceremony, the chamber’s president, Yiorgos Tsakiris, said that more is expected from the government in order for a significant difference to be achieved for Greek tourism such as an improved promotion of the Greek tourism product and the adoption of a national strategy for aviation, conference tourism, shipping, etc.

Mr. Tsakiris said that while 2010 was a recovery year for world tourism, Greece saw a nine percent loss of tourism revenue (compared to the also negative year of 2009) while Greek hotels’ revenue declined by 11 percent.

During his speech, the chamber’s president made reference to the new investment law, which was “drafted and presented in the absence of the tourism sector and tourism reality.”

However, the chamber’s president said he was optimistic since the government and politicians are finally beginning to realize that tourism is a development channel for the country as well as an exit from the crisis.

“This conclusion derives from the reduction of the Value Added Tax on accommodation facilities from 11 to 6.5 percent as of 1 January, 2011, which is an important measure as the overnight price determines the price of the tourist package and therefore the number of tourists that visit our country,” he said.