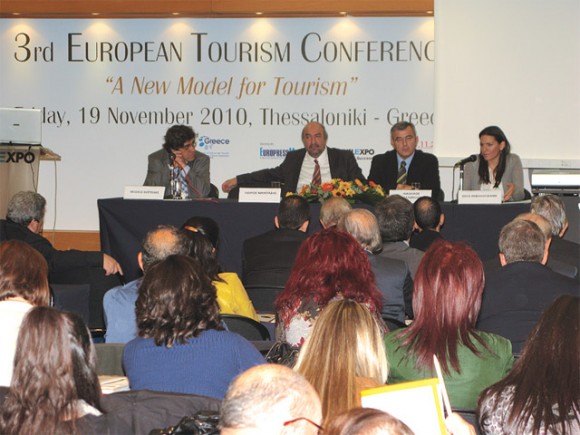 During the 3rd European Tourism Conference, Olga Kefalogiannis, New Democracy MP responsible for tourism issues, mentioned it was crucial for Greece to develop “green tourism” – the tourism development that requires new “habits” to be adopted by both the entrepreneur and the consumer. “These are simple practices that reduce the operating costs of a business and are summarized with the four R’s: Reduce, Reuse, Recycle and Respect,” she stressed.

The year 2011 will find Greek tourism with improved arrivals and overnights and also an increase in revenue, Deputy Culture and Tourism Minister George Nikitiadis said at the 3rd European Tourism Conference in late November 2011 in Thessaloniki.

The conference, entitled “A new model for tourism,” focused on the need for Greece to develop a new tourism model conformed to the special contemporary economical and social conditions and based on European multicultural principles and values.

During the first session of the conference entitled “Environment, Culture, Tourism,” the deputy minister referred to the “government’s primary goal,” which included the development of alternative forms of tourism such as religious, cultural, diving and climbing tourism that could “attract visitors to all parts of Greece.”

Furthermore, he explained how the VAT cut (11 percent to 6.5 percent) on accommodation facilities would benefit the development of alternative forms of tourism.

On his part, President of the Greek National Tourism Organization Nicolas Kanellopoulos stressed that Greece currently depends on specific European markets and overconcentrates on tourism activities in specific parts of the country. “This results to 50 percent of foreign visitor arrivals to choose Greece only during July, August and September,” he said.

He underlined that the development of specialized forms of tourism would expand Greece’s tourism season.

During the session entitled “Digital Agenda in Tourism and Marketing Strategies,” solutions that would affect and reinforce the Greek tourism product were proposed.

Of particular interest was the presentation of Yiorgos Barboutis, Rodos municipality representative of the Colossus of Rhodes project, which focused on strengthening the competitiveness of tourism destinations through the creation of “mega attractions.”

“The blue sea, hotels, restaurants and sites are no longer enough for the experienced, perceptive and sophisticated tourist,” Mr. Barboutis told the audience.

“Today Rodos is an out-of-date tourist destination as the supply of tourist accommodation and services substantially exceeds the demand,” he stressed.

Mr. Barboutis explained that the revival of the Colossus of Rhodes as the island’s “mega attraction” could re-introduce the island to the world.

Mr. Tzimas underlined that sports tourism is a leisure activity that could enrich the Greek tourism product in all its dimensions. “Sports tourism is for all four seasons as different sports are offered for recreation in the summer, others are offered in the winter, while other types of sport are ideal in the milder weather of autumn and spring,” he said.

The “European Tourism Conference” was organized for the third consecutive year by Helexpo and Europress Media Group and was held during the 26th International Tourism Exhibition Philoxenia.

Religious Tourism Expo To Kick Off In March