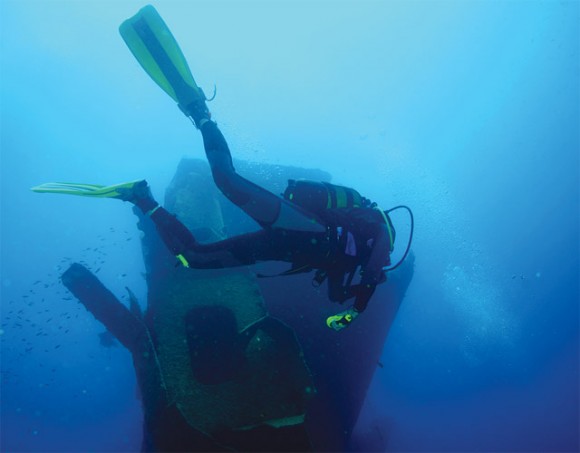 During his speech, Deputy Culture and Tourism Minister George Nikitiadis referred to the island of Kalymnos – a popular choice for divers due to its long history of sponge diving. The photograph shows a diver who is exploring the shipwreck of the “Thor Star” at Cape Roussa on Pserimos, a small island that lies in the waters between Kalymnos and Kos. Photo courtesy of Michael Paou.

The deputy minister said the ministry would soon announce programs -aimed to enhance watersports- that would include diving.

Mr. Nikitiadis told the audience that a meeting was on his agenda with all interested parties (diving experts, tourism and local government representatives) to discuss specific proposals for the development of diving tourism, specifically the creation of diving parks.

According to the deputy minister, the development of diving tourism would give qualitative elements to the domestic tourism product that would lead to an increase in tourist arrivals to Greece.

According to 2006-2007 data from the European Recreational Scuba Training Council, the number of European divers has been rising each year and already has surpassed 3.5 million out of which an estimated 70 percent selects Mediterranean destinations for diving (Egypt, Malta, Spain, Tunisia, Croatia and Turkey). As it was expressed at the conference, “almost nobody comes to Greece.”

Throughout the conference, distinguished speakers focused on a series of topics and proposals in regards to establishing Greece as an international diving destination. The special characteristics of the Greek underwater environment were analyzed as well as practices and procedures used in other countries.

During the session “The Marine Environment: Characteristics and Utilization,” Greek National Tourism Organization President Nicolas Kanellopoulos gave insight on the organization’s new strategy for tourism promotion and explained how recreational diving would be integrated into that strategy.

Additionally, of particular interest was the announcement made by Leonidas Morakis, spokesman for Olympic Holidays, during his presentation entitled “The development of the diving package: the travel agent’s approach.”

According to Mr. Morakis, the travel agency intends to organize the Greek diving product and make it available to the UK market.
The conference was organized by the Society for the Protection and Promotion of the Underwater Environment and its Coastal Area and held under the auspices of the Secretariat General of the Aegean and Island Policy, the Ionian Islands region, the Hellenic Chamber of Hotels and supported by the “Protect the Sharks Foundation.”

A forum entitled “The Challenge for Greece, the Eastern Mediterranean and the Black Sea” will be held 21-22 June at the new Onassis Cultural Center in Athens, organized under the auspices of the Greek Ministry of Maritime Affairs, Islands and Fisheries and the Chamber of Shipping.

The forum will focus on three key areas of sea tourism: cruise shipping, yachting and inter-island and coastal shipping.