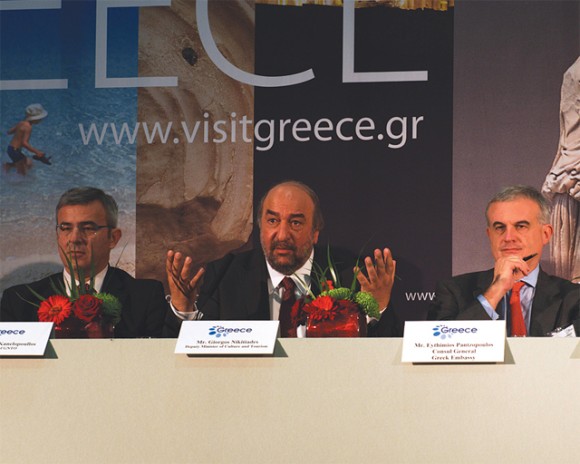 Deputy Culture and Tourism Minister George Nikitiadis (center) held a press conference during the WTM and mentioned the difficult situation Greece was up against last year due to the economic crisis and other incidents that caused negative publicity. “All this time the government made an enormous effort on all fronts, the economy, education, entrepreneurship, tourism and investment and was able to restore the country back on track,” he said.

“Working in international travel and tourism at the moment is certainly no holiday for many of us,” World Travel Market’s Chairman Fiona Jeffery said during her opening speech at the tourism fair at ExCel in London, UK, held this year 8-11 November.

Ms. Jeffery’s speech focused openly on the problems that parts of the travel and tourism industry have encountered in recent times.

On into its 31st year, the WTM once again attracted travel professionals from all over the world who came to discuss, exchange opinions, take advantage of business opportunities and learn more about the latest trends, newest developments and emerging markets.

Although professionals expressed concern about the impact of the economy on tourism, optimism was in the air as well as predictions for further recovery in the holiday market.

According to data from the World Travel & Tourism Council (WTTC), people are rediscovering travel following the recession.

Latest figures from the WTTC showed that worldwide travel and tourism’s gross domestic product is expected to rise by two percent this year, compared with a forecast in January of only 0.5 percent. 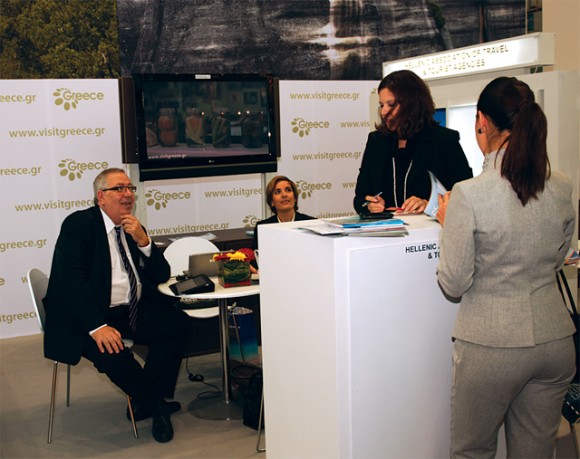 President of the Hellenic Association of Travel and Tourist Agencies (HATTA) Yiorgos Telonis at the association’s stand at the World Travel Market 2010. Greek travel agents seemed not to agree with Deputy Culture and Tourism Minister George Nikitiadis who estimated that arrivals of British tourists to Greece are expected to grow significantly within the next year as their president, Mr. Telonis, said that 2010 bookings from the British market appeared “cloudy.”

However, the WTTC urged caution, pointing out this sudden growth meant that tourism GDP in 2011 would grow by only 2.7 percent, compared with a 3.2 percent forecast in January.

Figures from the United Nations World Tourism Organization for the first nine months of this year confirmed the progressive recovery of the industry with a seven percent increase in international arrivals compared with the same period in 2009.

During the UNWTO’ Ministers’ Summit, which took place at WTM, the importance of tourism during the economic recovery was emphasized on.

The fourth annual summit’s main conclusion was that “global governments should place tourism higher on the agenda.”

Greece’s presence at this year’s WTM fair could be characterized as “discrete” compared to previous years. Press reports suggested that this was due to the Regional and Municipal Elections of 7 November, which coincided with the opening of the fair. Other reports mentioned Greece’s crisis as the main reason of the weak attendance of tourism entrepreneurs.

Whatever the reason, Greece stood up to the circumstance and gave a decent showing. 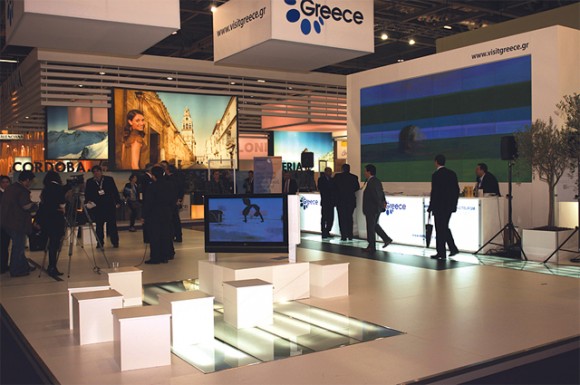 In the framework of his visit to the WTM, Deputy Culture and Tourism Minister George Nikitiadis gave a press conference for the Greek and international media and focused on the changing face of the image and the strategy for Greek tourism.

“We have faith in our abilities and this is the basic message we want to spread,” the deputy minister said.

Mr. Nikitiadis underlined that Greece is a safe and a welcoming tourism destination and revealed that he aims to extend the tourism season to 52 weeks a year.

In regards to the new strategy the ministry is following, he said that it’s based on changing and creating a new tourism image and identity for the country, which relies more on an experience for the visitor.

The ministry’s new strategy also includes the design of a new communication and a marketing strategy that emphasizes a strong, smart and targeted presence of the country on the Internet.

In an effort to increase the flow of British tourists to Greece, Mr. Nikitiadis held meetings with leading tour operators, heads of low cost airlines and representatives of travel reservation websites.

It appears that Greek tourism professionals are not the only ones pressuring their government for the reduction of the infamous spatosimo tax (tax to be paid by passengers on leaving all Greek airports).

“I say to the UK government, please consider getting rid of this damaging tax (Air Passenger Duty, similar to the Greek spatosimo) in the same way that its Spanish, Greek and Dutch counterparts have thought fit to do so,” WTM chairman Fiona Jeffery said.

Deputy Culture and Tourism Minister George Nikitiadis informed Greek journalists last month that the ministry would soon draft a study to convey how beneficial it was for Greek tourism to either abolish or reduce the spatosimo tax.

The British are coming!

According to press reports, Greek hoteliers saw positive signals in regards to the tourism flow of British tourists to Greece for next year based on contacts they had with British tour operator representatives during the WTM.

By November, already eight percent of bookings for holidays in Greece in 2011 had been made, Greek hoteliers told the Greek press.

The deputy culture and tourism minister made similar forecasts. After returning from the UK, Mr. Nikitiadis briefed Greek journalists and said that, according to early bookings of 2011, a two to three percent increase in tourist arrivals from the UK to Greece is expected for next year.

On his part, Andreas Andreadis, president of the Panhellenic Federation of Hoteliers, recently told GTP that the upward trend of bookings to Greece may reverse if events similar to those that occurred in 2010 (riots, demonstrations, closing off of archaeological sites) are repeated.
WTM 2011 will be held 7-10 November at ExCel in London, UK.

“This distinction has opened the door for the return of the Parthenon Marbles to their home,” Deputy Culture and Tourism Minister George Nikitiadis said last month upon receiving the prestigious global award for “Best Worldwide Tourism Project for 2010” for the New Acropolis Museum in Athens by the British Guild of Travel Writers (BGTW).

The award ceremony was held on 7 November, one day before the opening of the WTM fair in London.

At a special ceremony during the WTM in London, Mr. Nikitiadis received an award from the magazine’s executive director John Hillock.

Mykonos topped the most competitive islands in the Mediterranean and southern Europe including Ibiza, Capri, Madeira, Majorca.