The deputy minister’s recent statements in Germany that Greece will compensate tourists for delays that are the result of strikes does not honor the country, according to Fedon Kotsampopoulos, spokesman for the German-Greek Business Association (DHW).

Culture and Tourism Minister Pavlos Geroulanos had announced in June that compensation would be paid to visitors who are “forced” to stay in the country due to extraordinary events. 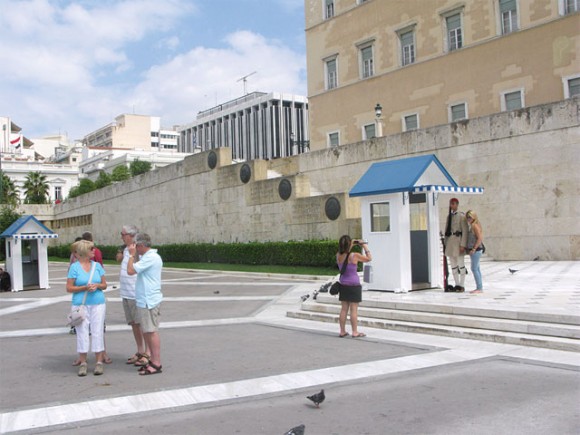 The leadership of Culture and Tourism Ministry announced in June that compensation would be paid to visitors who are “forced” to stay in the country due to extraordinary events.

Last month Deputy Culture and Tourism Minister Yiorgos Nikitiadis spread the news during his trips abroad. DHW’s spokesman said that such statements showed that the government has surrendered to demonstrations and illegal strikes.

The Hellenic Association of Travel and Tourist Agencies (HATTA) expressed doubts whether such a compensation regulation could function properly.

“There is no guarantee that the required structure and organization to implement such a measure could be applied,” HATTA told GTP.

The association underlined that if all relevant factors are not taken into account and not addressed to effectively, the compensation measure would result to tarnishing Greece’s image even worse than is was before.

President of the Hellenic Chamber of Hotels Yiorgos Tsakiris told GTP that the compensation scheme does indicate the willingness of the Culture and Tourism Ministry to protect Greece’s tourism.

“However, if tourists have to go through a maze of formalities the (compensation) measure would create yet another source of dissatisfaction and complaints, which would harm Greek tourism,” the chamber’s president said.

On the other hand, the Pan-Hellenic Federation of Tourism Enterprises (GEPOET) applauded the government’s initiative but expressed concerns in regards to the implementation of the decision and how it would have a substantial effect on the industry.

GEPOET said compensation must also be given to the travel agencies for the cost of room and board to tourists when travel packages are not executed normally.

On the political side, centrist party Drassi refered to the deputy minister’s statements as “humorous.”

“The tourism minister and his deputy are actually advertising the inability of the Greek government to protect the legal system and face the hordes of PAME unionists,” Drassi said in an announcement.