A new joint effort with the ultimate aim of improving the purpose and the role of the chamber has just begun, according to new President of the Hellenic Chamber of Hotels Yiorgos Tsakiris.

At a special event held at the Grande Bretagne hotel last month for the 75-year anniversary of the Hellenic Chamber of Hotels, outgoing president Gerassimos Fokas gave his best wishes and full support to “the new administration taking office amid an extraordinary economic crisis.” 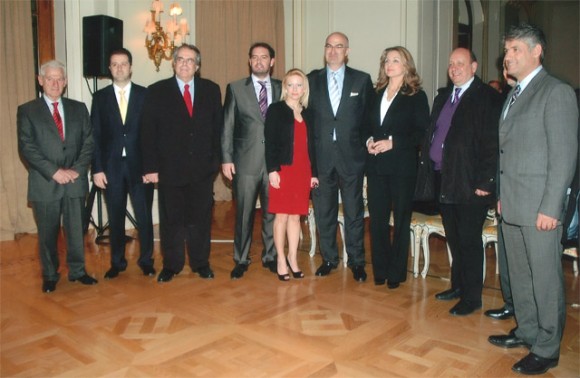 Deputy Culture and Tourism Minister Angela Gerekou (center-right) with the Hellenic Chamber of Hotels’ new Board of Directors.

Mr. Fokas said that he leaves the new administration of the chamber with his “obsession” for the consolidation of all tourism businesses under the chamber’s umbrella, something that would guarantee the leading role of tourism in national economy even further.

“I think that if the members of the Hellenic Chamber of Hotels and industry trade unions are united, we can move forward to meet the expectations of our colleagues,” Mr. Tsakiris said.

During the event, former president of the GNTO and the chamber, Apostolos Doxiadis, presented an anniversary publication for the 75 years of the chamber’s operation: “Hellenic Chamber of Hotels-Stations and Landmarks of the Greek Hotelier.”

Also presented was the chamber’s first annual tourism report, which focused on the course of Greek and world tourism in 2009. Last year Greek tourist arrivals fell seven percent compared to the five percent slump of international arrivals and Greek revenue dropped 11 percent against a seven percent decline in revenue worldwide. The turnover of hotels worldwide fell 15 percent while in Greece a 20 percent drop was recorded.

Hellenic Chamber of Hotels Board of Directors