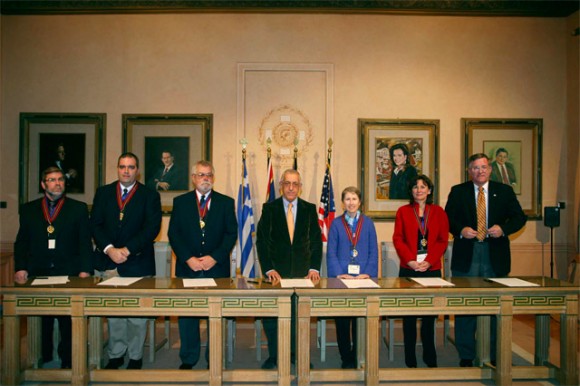 Athens Mayors that attended the 1st Athens Mayors Meeting, organized by The World of Athens, signed a declaration on the establishment of the “Athens of the World Network.”

The first meeting of the mayors of Athens, marks the beginning of one of the most appealing efforts of the organization World of Athens, said the organization’s President Tatiana Karapanagioti at a special event held within the context of the 1st Athens Mayors Meeting at Athens City Hall recently.

The World of Athens philosophy is the creation of a network of the 24 cities worldwide that are named after Athens. The idea was introduced last April under the concept to show the contribution of Athens to the world’s evolution and promote the city as an ideal tourism destination.

Ms. Karapanagioti underlined that the aim of the organization is to establish a network of cities, which will aim to debate on practices and strategies in all areas: culture, aesthetics, environment and whatever else contributes to everyday life in cities.

“The network aims to act as a catalyst for the production and exchange of ideas for a better quality of life,” she said.

The network’s future actions include the arrangement of a camp in the summer of 2010 in Athens, Greece, for young Athenians of the world and visits to major museums and cultural organizations of the Greek capital.

It was proposed that the next meeting take place in Athens, Georgia, in the United States, which is the second best known Athens globally.