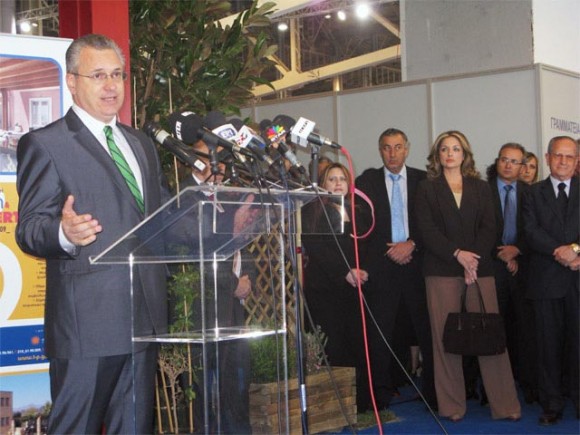 During the inauguration of the third Tourism & Property Show, Tourism Minister Kostas Markopoulos requested from Greek hoteliers and rooms-to-let owners to reduce price correlation between foreign and Greek tourists.

Discussions that concerned the impact of the economic crisis on Greek tourism -according to conclusions from international exhibitions ITB and MITT- highlighted this year’s third International Tourism & Property Conference.

At the conference, entitled “The global economic crisis and its consequences on Greek tourism,” the latest study of GBR Consulting was presented, which gave two possible scenarios for this year’s tourism season.

According to the study, the optimistic scenario sees a 10 percent drop in arrivals, while the negative scenario reports a 15 to 20 percent fall.

In the case of the second scenario, tourism revenue will be reduced by 10 billion euros and hoteliers will see a reduction of 1.2 billion euros.

Emmanuel Alexandrakis, special secretary of the tourism ministry, announced the newly established special service for the coordination, management and implementation of actions of the tourism sector.

“This special service is a modern and efficient model for development investments in the tourism sector,” he said. 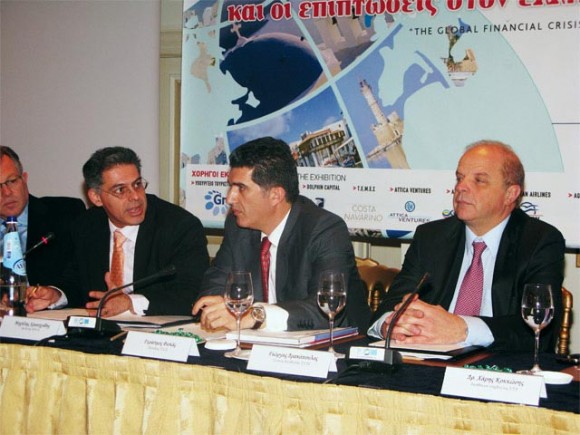 During the conference, Georgios Drakopoulos (right), general manager of the Association of Greek Tourism Enterprises, raised the question in regards to the outcome of the two-million-euro strategic marketing plan of Greece introduced by the tourism ministry two years ago. Emmanuel Alexandrakis (left), special secretary of the tourism ministry, answered that the ministry has the marketing plan, which was handed down by the previous minister and is currently updating it with new data.

Georgios Drakopoulos, general manager of the Association of Greek Tourism Enterprises, wondered if tourist establishments would open on time for the tourist season.

Mr. Drakopoulos stressed that a fall in arrivals up to 20 percent would translate to some two million fewer tourists than last year, 2.5 billion euros less in revenue and 50,000 people out of work.

However, an optimistic view in regards to the crisis was expressed by Giannis Kent, founder and board member of the hotel chain, Aquis Hotels & Resorts.

According to Mr. Kent, “the situation is not as tragic as it appears” as there may be a 15 to 17 percent reduction in revenue compared with 2008 but not only the crisis is to blame.

Mr. Kent noted that the decline in bookings is also due to the fact that after the tremendous pressure hoteliers received by major tour operators  to cut their prices, they were forced to make discounts for August of up to 25 percent.

He also claimed to be optimistic, as once again “last minute bookings will do their part.”

The conference preceded the Tourism & Property Show 2009, held for the third consecutive year.

The show, which was held under the motto “Vacations only in Greece,” saw the participation of 114 tourism businesses, tourism real estate companies and suppliers, 42 European hosted buyers and a visitor response of some 8,000 individuals.