Greece cannot compete on a price basis with new destinations under its current hospitality cost structure but the country has the necessary element to reinvent itself, reshape its product, and market itself efficiently in order to maintain the positive publicity and the momentum gained by the successful 2004 Olympic Games, a recent study said.

The study “The Changing Face of the Greek Hospitality Market” summarizes the historical tourism trends in Greece until 2007 and describes the most significant new hotel developments expected to beacon the transformation of the country into a major competitive player in the global hospitality market.

According to the World Travel and Tourism Council, the travel and tourism contribution to the Greek gross domestic product is expected to rise from 17.2 percent (37.3 billion euros) in 2008 to 18 percent (69.6 billion euros) by 2018.

The Greek travel and tourism economy is currently ranked 25th in absolute terms and 39th according to its relative contribution to the country’s GDP amongst 176 countries.

The study produced statistics that show that total tourist arrivals have increased from approximately 10 million in 1997 to more than 17 million in 2007, achieving a compound annual growth rate of 5.7 percent.

In 2003 and 2004, total tourist arrivals in Greece declined due to the build up towards the Athens Olympic Games.

However, tourist arrivals recorded continuous increases from 2005 through 2007. 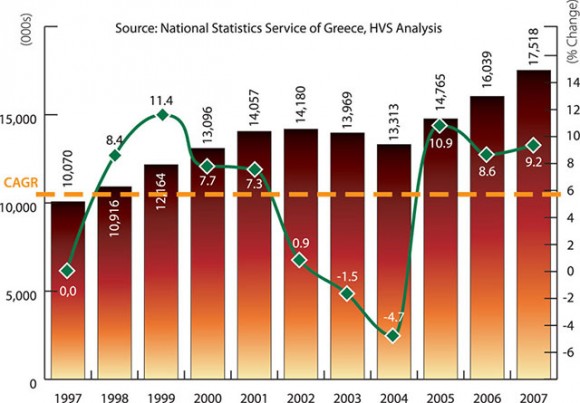 The study said that one of the biggest issues that Greek tourism faces is its highly seasonal nature as most tourists visit Greece during the summer months and leave the rest of the year with lower visitation rates.

According to the study, one preventative factor that impedes a change in this pattern is the lack of charter flights from major source countries towards various Greek destinations during the winter months that limits the number of visitors that travel to and within Greece during that time, with the exception of Athens.

A second limiting factor is the lack of appropriate infrastructure throughout the country that is capable of attracting visitors during the off-peak tourism period beyond Athens.

The study also gave an overview of the current hospitality market in Greece and reported that the lack of a reliable classification system for Greek hotels, coupled with the rather limited existence of international hotel operators and the bell-shaped seasonality pattern, set the Greek hospitality market as problematic to a number of potential investors.

However, many international hotel brands are currently interested in the Greek hotel market, especially at its high-end spectrum.

This is a clear sign that the upscale market is expected to significantly improve over the next years, especially in conjunction with the numerous incentives currently available to investors in the Greek tourism industry.

The study shows that currently there are over 9,200 hotels throughout Greece.

Nearly 65 percent of that supply is in the one- and two-star category with the remaining 35 percent in the other categories.

The majority of hotels are independently or family-run with just about four percent affiliated with a local or international brand. Over the past five years an average of 55 percent of the total hotel arrivals in Greece has been of international nature.

International arrivals reach a peak during the summer season, whereas domestic tourism (business and leisure) is dynamic throughout the year.

In addition, the lack of specialized tourism products such as golf courses, large convention centers, and marinas that can absorb the potential demand from larger number of tourists, create a burden on the destination by virtue of not being able to attract business from niche markets that could boost international arrivals, especially during the shoulder months.

As for future developments new large-scale tourist complexes are expected to transform the image and popularity of Greece as a tourism destination.

These leisure-integrated resorts are set to enter the market over the next few years and are believed to make Greece a part of the luxury hospitality market that offers a wide array of infrastructure and facilities.

Once in operation, these mixed-use resorts are envisaged to create new destinations mainly on Crete and in Peloponissos.

These new destinations are expected to attract more tourists and foreign individuals interested in buying or renting a holiday home since most of these developments will combine hotel facilities and residential units.

This new trend, combined with the hotel renovations undertaken a few years ago because of the 2004 Athens Olympic Games, is expected to set Greek tourism infrastructure on a new level.

The hotel operating season of some popular Greek destinations is anticipated to be extended to include the off-peak visitation periods (winter months) by virtue of the existence of upscale leisure facilities that would promote tourism during the shoulder months, namely golf and holiday villas.

In conclusion, the Greek government has realized the potential of tourism as well as the stagnancy problems of the country’s tourism product, which have created a problematic seasonality pattern and have reduced attractiveness compared with other destinations in the Mediterranean. As such, it is promoting incentives for boosting investment activity to shift the current tourism concept towards a more versatile and sophisticated one.

The study was conducted by consulting and valuation analyst Pavlos Papadimitriou, and senior associate, Themis Trakas, of HVS, a global consulting and services organization focused on the hotel, restaurant, shared ownership, gaming and leisure industries.