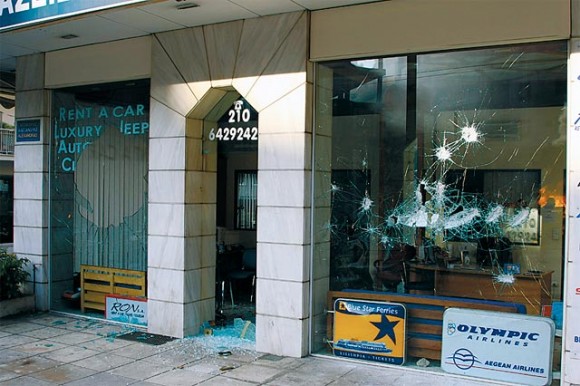 A travel office in downtown Athens damaged during the difficult weeks of December. Such images circulated globally and tarnished the image of the Greek capital. Photo: Christos Mathioudakis

Overnight accommodation in Athens saw a 25.9 percent drop in all hotel categories in December 2008 when compared with the year before, the Athens-Attica Hoteliers’ Association said recently.

The reduction is said to have occurred mainly due to the riots that took place in central Athens before and during the holiday season. In particular, the hotels in central Athens saw overnights plunge from a minimum of 50 percent up to 70 and 90 percent during those difficult weeks of December.

The association stressed that 5-star hotel occupancy rates fell by 27.5 percent in December 2008 but had dropped 41.5 percent during some days of the 11-31 December period.

The reports of the international media on the events that took place in the Greek capital, along with the general economic crisis, resulted in mass cancellations and to an inevitable reduction in demand.

According to the association, although the overall disruption in Athens has been reduced, prospective visitors are still unsure of their safety.

The association has requested immediate action from the state to inform international markets that Athens has returned to its normal pace and that it remains a safe European capital.

In addition, hoteliers said that reservations for January and February of 2009 were down by nearly 70 percent compared with the same months last year.

They also referred to spring bookings and said that so far they do not guarantee a substantial recovery for the hotel sector.

Meanwhile, tourism experts said that the postponement of the inauguration of the new Acropolis Museum by the culture minister had a direct impact on the city’s hotel bookings.

Also, hotel owners and entrepreneurs have stressed that due to the eight million euro “debt” of the Greek National Tourism Organization for advertising in media abroad, additional negative mentions of Athens have been noticed in the international press.

As for Greek hotels in general, the Hellenic Hotels Federation recently expressed its discontent on the negative consequences inflicted on the industry from strikes and demonstrations.

The federation said that road blockades had made it difficult, and in some cases impossible, for visitors to reach their desired hotel, while at the same time many cities resemble war zones when Greece comes to a standstill during general strikes that take place across the country.

As a result to the drop in tourism arrivals, sectors of the local economy such as agriculture and trade are affected as well, the federation underlined.

Foreign Arrivals for 2009 Predicted to Fall