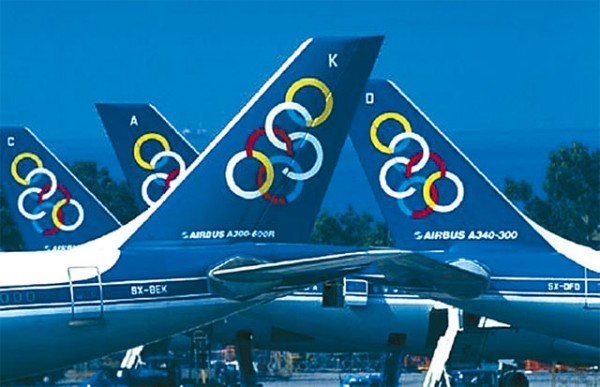 The European Union last month gave its consent to Greece’s plan to privatize the Greek carrier Olympic Airlines next year, but said the airline must pay back 850 million euros in illegal state aid it received between 2005-2007.

According to the EU-approved plan, Olympic Airlines will be broken into three divisions that cover flights, ground handling and maintenance, which would be sold to investors by mid-2009.

In regards to flights, Pantheon Airways will receive Olympic’s fleet, its landing slots, and the right to use its brand name and famous Olympic rings logo.

(Pantheon Airways was established in November 2005, through an amendment in parliament, with the purpose to become the successor of Olympic Airlines.)

At a recent press conference in regards to the matter, Transport and Communications Minister Costis Hatzidakis assured that the carrier’s current work force would be fully secured.

The airline’s full-time employees amount to 4,600 and seasonal workers to 3,500. It’s total of losses have reached some 2.7 billion euros.

Just recently, the minister had insisted on the privatization scheme for the company where 54 of its 68 non-subsidized routes post losses.

Olympic Airlines recently drafted the timetable for the 14 September-25 October period and announced the suspension of the Thessaloniki-London flight due to losses of 3.6 million euros a year.

In addition, the new timetable reduces flights to Frankfurt, Munich, Stuttgart and Dubai.

According to Olympic Airlines, the total sum of annual losses from the specific flights amount to 22.1 million euros.