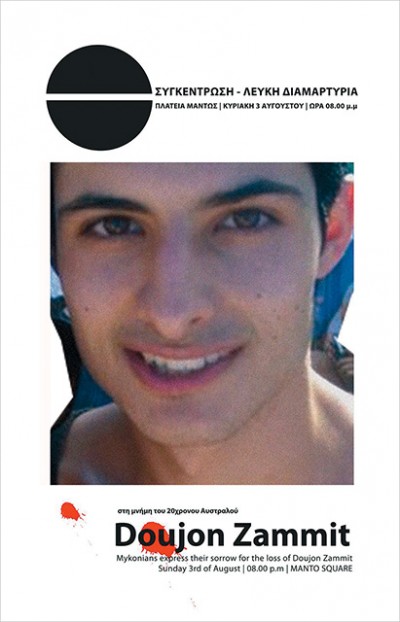 Mykonians expressed their sorrow for the tragic death of 20-year-old Australian Doujon Zammit on their island by organizing a protest. Doujon’s violent and inane death sparked anger throughout Greece.

After the recent homicide of an Australian tourist who was beaten to death, allegedly by a Greek bouncer on Mykonos, Tourism Minister Aris Spiliotopoulos convened an emergency meeting with officials from other ministries in the framework of setting up a Crisis Management Committee to troubleshoot incidents that occur in tourist areas of Greece.

Tourism Minister Spiliotopoulos emphasized the need for the proper training of the members of the committee to deal with a crisis to start as soon as possible – namely in September.

He reminded that among the ministry’s top priorities are measures to fight the mentality of cheating tourists, the provision of low quality alcoholic beverages in bars by profit-hungry owners and the presence of ‘bouncers’ at nightclub entrances in tourist areas.

“We must abolish this image of ‘thug-like bouncers’ that plague the tourist resorts in Greece,” he said.

The tourism minister also referred to recent events that had a negative impact on tourism -the sinking of cruise vessel Sea Diamond and the rumors from abroad concerning earthquakes in Greece- and expressed his concern in regards to competitor destinations that earn at Greece’s expense.

Mr. Spiliotopoulos emphasized the role of the Crisis Management Committee, which is to handle each crisis properly so to not tarnish the image of Greek tourism.

On its part, the Association of Greek Tourist Enterprises says it has repeatedly proposed the set up of a Crisis Management Committee in order to properly handle crises that continuously take place during the summer months (black outs, forest fires, drownings, etc.).

In 2004, the association proposed a list of immediate priorities to the government in order to tackle the adverse climate that plagued Greek tourism. One of the top priorities was the activation of a Crisis Management Committee.

According to the association’s general manager, Yiorgos Drakopoulos, incidents should be expected to occur during every tourism season. “Greece will always have a crisis,” Mr. Drakopoulos told GTP.

“For the past years our association has proposed the function of a Crisis Management Committee, as every year an unpleasant incident has and will continue to occur.”

Mr. Drakopoulos stressed that for the Crisis Management Committee to produce results it is vital for it to be made up of members from the Greek Tourism Ministry and the Greek National Tourism Organization.

“The Crisis Management Committee should be a permanent team within the ministry with specialized and professional members who each know what their role is and how to handle a crisis when one breaks out,” he said.

Following the ministries’ ‘Crisis Management Committee’ meeting, the tourism minister visited Mykonos where he held a meeting with the island’s local bodies.

In regards to the tragic loss of the Australian tourist, Mr. Spiliotopoulos referred to his murder as an “isolated incident” that should not affect the image of the country.

He made reference to his ministry’s intentions to crack down on such occurrences with the assistance of the Ministry of Interior.