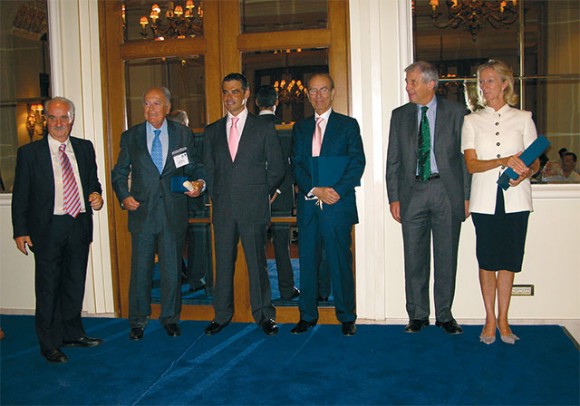 Greece can play a leading role and become a hub for itineraries in the Eastern Mediterranean cruise industry, was the unanimous outlook expressed by all leading representatives of the international cruise industry who attended the recent cruise forum CRUISEinGREECE.

The forum was co-organized by Seatrade (maritime publications, conferences and exhibitions) and the Hellenic Association of Travel & Tourist Agencies and under the support of the Greek National Tourism Organization.

Following the successful outcome of the forum, HATTA President Yiannis Evangelou stressed “The main aim of the CruiseinGreece forum was to examine the prospects of Greece in the international cruise industry and gain a better perspective on how to extend Greece’s potential through diversity and a variety of destinations.”

‘Greece as a cruise destination’ was the main topic of discussion during the forum’s first session. Representatives of the international cruise industry discussed how Greece is evaluated today as a destination by the large cruise companies, what the prospects are for the future and what will motivate the industry to promote Greek ports and destinations.

The majority of the international representative’s stressed that the main problem keeping Greece “off the cruise map” is cabotage (the transport of passengers between two or more points in the same country only by local companies). As Hatta’s chairman said: “Greece must finally take its fate in its own hands and take the necessary decisions for the abolition of cabotage.”

According to Mr. Evangelou, only Greece sees this ‘institutional framework’ as a relief, but in reality nothing has changed. “Approximately 80 percent of cruise ships do not have European Union flags, resulting in Greece excluding the programming of any international round-trip routes in the country.

“Our Greek policy is damaging to the economic benefits we could obtain from cruising,” he stressed.

The chairman of Hatta mentioned, “Italy pulls in annually over 3 billion euros from companies that either dock their ships at ports or just visit them. In comparison, Greece receives almost nothing since the biggest revenue comes from home porting, which is something that we discourage with our attitude.”

Tourism Minister Aris Spiliotopoulos shared Mr. Evangelou’s opinion as he too requested the cabotage restrictions to be lifted and stressed how the development of the cruise industry is one of the key policy priorities of the ministry. Mr. Spiliotopoulos noted that Greece could acquire ports-hubs only if the institutional framework is changed. 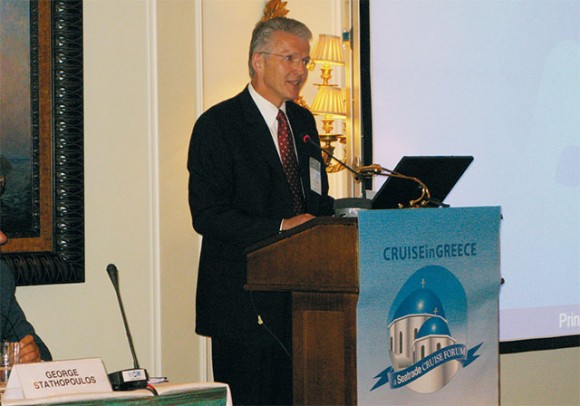 “Ports that want to promote themselves must offer a one of a kind experience to travelers,” said Bruce Krumrine, vice president of shore operations of Princess Cruises.

Within the framework of the first session another topic examined was aimed to promote the less-visited Greek cruise destinations as only five or six ports receive the most attention (Mykonos, Santorini, Rodos, etc.). The representatives all agreed that Greece is a very interesting destination due to the fact that the short distances between the islands offer a wide variety of travel experiences. But cruise companies go only where their customers want to go. Since Greece does not promote any new destinations (such as Syros or Paros) to travelers, cruise companies cannot risk organizing a route that would not consist of commercial ports.

Regarding ‘How the ports are selected by cruise route planners,’ the forum dealt with the demanded factors in regards to choosing a port, such as how well the specific destination is known to the market. The cruise company representatives emphasized that one of the key elements taken into account is the performance of a port.

The issue of organized tours, which are the main source of revenue in the Mediterranean, was discussed and the issue of port congestion (the arrival of cruise ships at the same time) was analyzed along with possible ways of managing the problem.

The possibility of “Greece as a cruise hub” was raised and discussions included port infrastructure, passenger boarding and disembarkation, handling and transport services, the possibilities of the international airport and prospects of scheduled flights.

During these discussions, leading companies, such as Carnival, Royal Caribbean/Celebrity and Princess, but also companies with smaller luxurious cruise ships of 100 passengers, repeatedly expressed their desire to make Greece a hub for itineraries in the Eastern Mediterranean cruise industry.

The case of Piraeus as a hub port for the Eastern Mediterranean was warmly supported -as was the case of Thessaloniki but at a later stage- once the existing legislation is lifted. In addition, representatives of Alitalia and Air France-KLM airlines, Pireaus Port Authority and Athens International Airport replied that they are “ready to support such a development.”

The representative of Royal Caribbean/Celebrity revealed to the audience that his company sees great interest towards the port in Lavrio as a hub for cruises exclusively to the Greek islands.

The representatives of the leading cruise companies agreed that if Greece was to become a hub for cruise ships, then they would naturally recruit Greek sailors (it was mentioned that international cruise ships of all flags currently employ over 7,000 Italian sailors, as opposed to the 628 Greek sailors that are employed). Cruise company representatives also asserted that they are willing to invest in Greek port infrastructure if requested to do so.

Of major interest was the proposal of the CEO of Louis Hellenic Cruises, George Stathopoulos, to the GNTO and Hatta for the creation of an organization that will bring together involved parties and promote cruise destinations, coordinate information to the industry, prepare studies on development strategies, etc. Mr. Stathopoulos said that Louis Hellenic Cruises would contribute actively to such an organization. He added that “The Greek islands can be the Caribbean of Europe.”

In his closing speech, Mr. Evangelou expressed that he is determined to continue this effort in order for Greek home ports to be included on the global tourism map as international cruise destinations. “I promise you that you will hear about this issue again very soon,” he said.