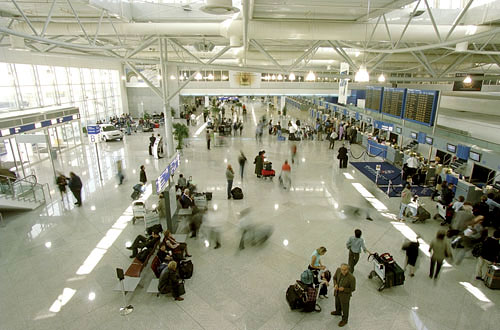 The Official Airline Guide (OAG) recently announced the route Barcelona-Madrid to be the most frequent route with 971 flights weekly. The route Sao Paolo Congonhas-Rio de Janeiro with 894 weekly flights came runner up, and then Jeju-Seoul Gimpo with 858 flights and Melbourne-Sydney a close contender with 851 weekly flights closely follows this.

With regards to Europe specifically, the route with the most frequency weekly is Amsterdam-London Heathrow with 350 flights.

For the month of September, OAG research indicated some 2.4 million flights took place worldwide which amounts to some 295 million seats and thus an increase of four and six percent respectively, in comparison with September 2006.

Recent research also indicates the number of flights within Europe show an increasing trend of six percent and occupancy is expected to increase by nine percent. With regards to low cost airlines, OAG claims they now represent 16 percent of total flights worldwide, and 20 percent of total occupancy. These figures were 14 and 17 percent respectively in 2006.

The OAG Airport Marketing Awards also took place recently where European airports took the top accolades in all four categories. The event took place at the annual Routes World Development Forum in Stockholm, Sweden. The Awards, four in total, have equal merit and each one recognizes the varying levels of passenger traffic each airport handles.

Amsterdam Schiphol took the honors in the “More than 25 million passengers per year” category, an award it also won in 2006.

Athens International Airport retained its title in the “10 to 25 million passengers per year” category and was honored for its development program that has attracted 12 new airlines and 11 new destinations in America, Asia and Europe, this year.

CEO of OAG, Alan Glass, who presented the awards at the ceremony, commented, “These Awards are highly prized by airports because they are voted for by their industry partners, the airline network planning community.”

He added, “OAG is delighted to sponsor the Airport Marketing Awards again this year to recognize the outstanding achievements of airports in marketing their services to airlines and to the traveling public.”

To coincide with the Routes World Development Forum, OAG Back Aviation also completed an additional survey to identify world rankings of all new routes. From 2006 up until now, 2,506 new routes have been launched or reinstated- up 400 from 2006-with a total of more than 22,000 new flight services now operating on these routes on a weekly basis.

OAG is a global flight information and data solutions company for the passenger aviation, air cargo logistics and business travel markets. It brings together buyers and sellers of air travel and transport through the management and distribution of airline product information. OAG BACK Aviation Solutions, a division of OAG, compiled these statistics by tracking frequency-volume of flights-on its renowned schedules database.