The Hellenic Association of Travel & Tourist Agencies has declared the recent action of the Athens Urban Transport Organization illegal, with reference to the new “discover Athens sightseeing” bus, line 400.

The bus starts and terminates at the Athens Archaeological Museum and stops at several key tourism sights during the 90-minute journey. The ticket costs five euros and can be used within 24 hours on any public transport except the suburban railway or trains to the airport.

The travel association expressed its objection to the route as it “creates serious problems to the smooth operation of tour buses in Athens and undermines the efforts of tour operators who specialize in this form of sightseeing.” 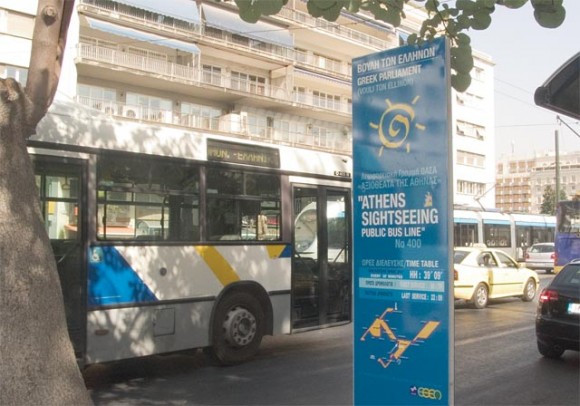 It also expressed concern for the negative image these buses create as “they are poor quality transportation and the service is not worthy of what a tourist expects from their visit to a country that recently organized the Olympic games.” It also asserts that under law 2446 the new route is illegal.

In response to this the transport organization claims the new route is part of a pilot urban route program that makes stops at key locations that tourists wish to visit.” It asserts that no illegal activity is in place as there is no official tour on the bus except for a pre-recorded sound tour and information leaflets, which justifies the cost of this particular route.”

The Pan-Hellenic Federation of Tourist Enterprises, which, according to its website, is the body that collectively represents travel enterprises in Greece, also expressed its concern.

The president of the federation, George Doukas, said: “This project belongs to tourism buses as there is no room in the market of tours for this type of activity.” He added that “specialized tour operators effectively organize bus tours and this initiative goes against the government backing of tourism enterprises and poses an illegal activity in every respect.”

Mr. Doukas concluded that these buses, financed by tax payers, will destroy a whole market -that of city bus tours- and consequently the livelihood of hundreds of members of the tourism industry who have spent the past decade with the aim to create more efficient bus tours in Athens.

Opportunity For Greece to Enhance Image

Greek Tourism Gets Organized on the WWW