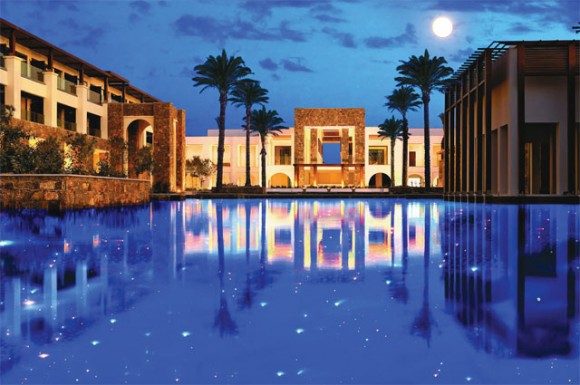 Amirandes, the new six-star luxurious resort of the Grecotel group.

Amirandes is the new six-star luxurious hotel resort of the Grecotel group that recently opened its gates in eastern Crete. The resort is characterized by its unique Minoan identity and covers an area of one hundred acres along the coast. Amirandes is the only resort that meets the international standards of a six-star hotel and is considered to be unique in its category in Greece.

The new addition to the Grecotel chain boasts 212 luxury rooms, bungalows, suites and villas with a particular aesthetic appeal as they face the Cretan archipelagos. Sixty have private pools.
There is also a water surface of two kilometers with star and flame effects and balconies submerged into the water.

The rooms are decorated with handmade furniture and expensive fabrics, and fully equipped with high-tech appliances such as plasma T.V. and Bang & Olufsen telecommunication.

Amirandes has three gourmet restaurants with a panoramic sea view, one restaurant with traditional Greek food and three bars. The resort also has a 520-square-meter Elixir Spa with an internal heated pool, a sauna, a state-of-the-art gymnasium, individual therapy rooms and a treatment center.

The resort has a 720-square-meter conference center that can cater for up to 400 delegates and is equipped with the most technologically advanced audiovisual systems. Amirandes also offers three tennis courts, sea sport facilities, an archery center, a bike hire station and several shops selling souvenirs.