Korean Air, South Korea’s largest carrier, announced it would launch a new low cost carrier within two to three years to compete against the growing legion of budget airlines in the North Asia region.

Korean Air’s low cost carrier will operate domestic routes and short and mid-haul international routes through the use of a Boeing 737 fleet that boasts high efficiency and typical low prices.

Korean Air has organized a special task force since 2005 to study the feasibility to operate its own low cost carrier. For the new airline, Korean Air considers using one of its Hanjin Group affiliates, Korea Airport Service, which has charter flight operation experience, rather than setting up a new company.

Young-Ho Kim, president of Korean Air’s passenger division said: “We have been pushing to establish a budget airline to cope with changes in the global air market, including a rise in the number of budget carriers.”

The South Korean flag carrier asserted many times that the dump selling and unreliable tourism packages centered on some low cost carriers cause market disturbance and customer inconvenience and this must be stopped. 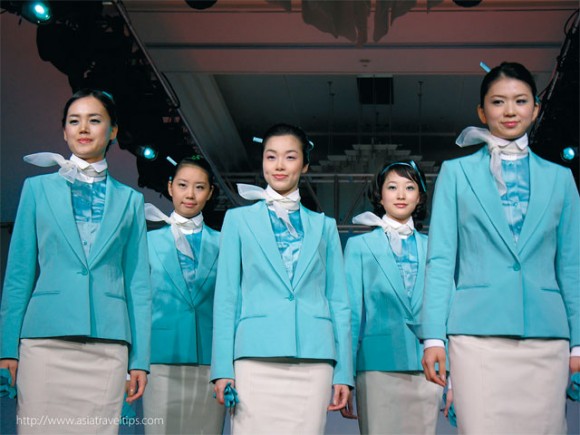 Korean’s new low cost carrier may not have these uniforms but promises upmarket services.

In response to this Young-Ho Kim said: “Korean Air aims to differentiate the new low cost carrier with excellence, using the experience world-class maintenance skills and fleet efficiency know-how accumulated for more than 35 years through Korean Air operation in order to proactively deal with changes in the airline industry.”

Korean Air’s decision to launch its own low cost carrier derives from its commitment to proactively deal with the evolving airline industry, to provide quality transportation service at lower price for the benefit of the traveling public, and entice more customers.

The low cost plan also takes in to strategic consideration the expected changes in Korea’s domestic aviation market. Within two to three years when Korea’s high-speed railway will be completely open for service much of the domestic air traffic demand is expected to shift to the railway. Korean Air concludes that it must develop new markets and business models to effectively utilize the fleet that will be freed from domestic operations.

Korean Air has a fleet of 122 aircraft and is one of the world’s top 20 airlines. Korean Air operates almost 400 passenger flights per day to 110 cities in 36 countries. It is a founding member of SkyTeam, the global airline alliance, partnering with many prominent airlines to provide travelers with extensive worldwide destinations, flights and services.

In 2007 the airline won the coveted OAG Airline of the Year Awards for Best Economy Class on its debut appearance in the competition. Korean Air was also short listed for the best International First Class and Best Airline-based categories.

It also won the prestigious Mercury Award from the International Travel Catering Association for the development and implementation of A Letter From Flying Mom service for unaccompanied minor passengers and their families. The carrier was awarded the Gold Prize in the onboard service category.