Some eighty representatives of the local tourism and travel industry attended the recent seminar organized by AirSea Lines under the auspice of the Hellenic Association of Tourism and Travel Agencies. During this event they were informed of the developments, services and network of the hydroplane carrier as well as its potential in the development of tourism in Greece.

The president of HATTA, Yiannis Evangelou, opened the event and discussed the problems that travelers currently face in Greece. He talked about the restrictions of traveling via ferry due to long hours and extended delays during the summer months and the high prices of domestic flights. He welcomed the hydroplane as a new and revolutionary means to travel. 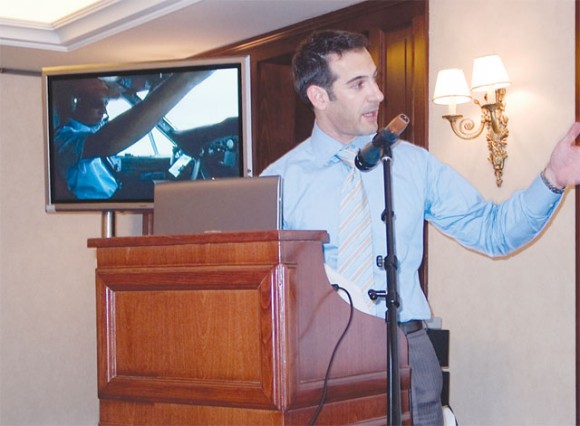 Sales and marketing manager of AirSea Lines, Michael Assariotis, then took the floor to present the structure of the company. He said: “Hydroplanes offer a quick, attractive, safe and intriguing alternative solution to a country like Greece with so many islands.”

He then discussed the timetable of the company and its future prospects. Currently, the company’s routes cover the Aegean and include the islands of Mykonos, Ios, Santorini and Paros in the Cyclades from the port of Lavrio. These islands are also connected to Kalymnos and Kos, islands that previously were not directly connected to the Cyclades by ferry or airplane. This gives a new dimension to the term “island hopping” previously restricted to ferries only. In July the company launched new routes in the Ionian with scheduled flights to Corfu, Paxi, Kefallonia, Lefkada, Patra and Ithaka.

Mr. Assariotis asked the delegates to “imagine the possibilities” as he explained the potential uses of the hydroplanes other than for scheduled flights. He outlined the possibilities of island hopping, flightseeing tours (Sounio Panorama, Corfu From a Bird’s Eye View, Mykonos Flightseeing and Santorini Flightseeing are already in effect), charter flights, excursions and even cargo.

When questioned about the safety of the hydroplanes, Mr. Assariotis explained that they abide by all the safety regulations of a typical aircraft. He also discussed the prospect of bad weather whereby he explained that hydroplanes take off and land in “protected” harbors and in the air they respond the same as in any other aircraft. In the case of an exposed harbor, a hydroplane can always land at an airport. He explained however that in this case it would include a surcharge of airport taxes. This is in extreme cases and noted that when the hydroplane takes off and lands on water there are no taxes for the passenger and therefore prices are kept low.

As well, he said that a bus departs from Syntagma two hours before scheduled flights for Lavrio seadrome. He concluded that AirSea Lines is in the progress of receiving permission to land in regions without seadromes. Further seminars are planned to familiarize tour operators and travel agents with this means of travel, which “is unique within Europe.”