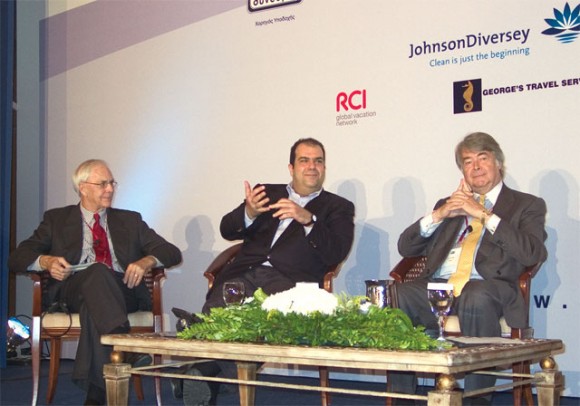 For Greece to become a more attractive tourism destination, investment must be oriented to improving quality of life by combining the uniqueness of the Greek lifestyle experience with the standards and values created by global community, says the Association of Greek Tourist Enterprises (SETE).

New investments must be geared to this expanded meaning of tourism, no longer defined as simple summer holidays but providing diverse experiences. This was the central concept of the association’s fifth conference on tourism and development, focusing on designing investment policies for Greek tourism.

The keynote speaker for the conference was Professor Don Hawkins of George Washington University who discussed globalization and localization as factors that must be combined successfully by national tourism investment policies. This combination, termed “glocalization,” involves creating global demand while protecting the local product.

National policy should focus on the quality of the tourism experience by protecting the destination’s environment, culture, history and the local quality of life. Protection of the product then guides policy design as well as marketing, branding, communication, sustainability and crisis management. This holistic approach should involve the local government and stakeholders.

In her speech at the conference, Minister of Tourism Development Fanni Palli-Petralia, said “460 investments have been approved with a total combined budget of 917 million euro. The amount subsidized reaches 400.5 million euros and about 2,644 new jobs will be created.”

Mrs. Palli-Petralia stressed that beginning January 2007, the new investment law will come into effect in which tourism is of primary importance. Also, according to data from the National Tourism Organization, between 2005 and 2006 architectural plans were approved for 26 conference centers, three golf courses, three ski resorts and 19 thalasso-spa centers.

Professor Vassilis Patsouratis, Athens University of Economics and Business, and Professor George Anastassopoulos, senior lecturer at Patras University, presented their study findings for the 2002 to 2004 period. The reduced tourism arrivals and revenue during this period, as well as the relative lack of investment, limited the growth of tourism’s contribution to the GNP and to reducing the deficit by as much as 18 percent. In addition, profits were reduced, salaries remained unchanged and as many as 65,280 jobs were lost. During 1990 to 2006, only 1.6 percent of the funding every year for the public investment program (PDE) directly concerned tourism.

The professors concluded that the new strategy for Greek tourism should focus on investments, products and services that cover most of the year and should be attractive to the diverse lifestyles and interests of tourists.

David McMillan, CEO for the International Hotel and Restaurant Association, said that Greece should join the association, which is recognized by the United Nations as the voice of the industry. Mr. McMillan also pointed out that according to statistics, in the next ten years the industry will be short by ten million employees. University level programs in Greece are very important for training the future employees of this dynamic industry.

Stelios Hajiioannou, founder and chairman of easyGroup, pointed out that the Athens International Airport was the third most expensive airport in Europe and for Greece to be more competitive and to attract more low cost flights, some of the military airports should be opened to civil aviation.

Sustainable Tourism Forum To Be Held on Rodos