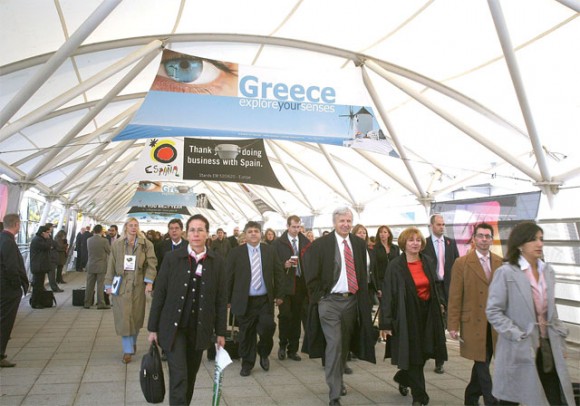 The World Travel Market (WTM) held in London last month was the perfect venue to present Greece’s new advertising campaign with the message “Explore your senses in Greece.”

Tourism Minister Fanni Palli-Petralia presented the new campaign message and announced that the bidding competition for the hotel star-rating project was open. Mrs Palli-Petralia said Greece will adopt a star system to categorize the country’s nearly 40,000 hotels and other accommodations to keep up with international trends.

The existing letter-based classification system will soon be out of date and will not give a clear picture of the services offered. Also, increasing investment in tourism requires a more modern system that fits the newest developments in construction and technology, added Mrs Palli-Petralia.

A total of 5,000 exhibitors from 202 countries and regions attended the WTM this year, with a record number of new exhibitors, including Moldova, Cape Verde, Sudan and the Emirate state of Fujairah.

“WTM tends to mirror the success of global tourism, which is doing extremely well,” said Fiona Jeffrey, WTM’s managing director. “International tourism spend is now running at $2 billion per day, with Africa maintaining the fastest growth in 2005 of nearly 8 percent.”

The WTM’s Global Trends Report for 2006 released during the exhibit, made in cooperation with Euromonitor International, identifies the latest trends and future directions of the industry on a global and regional level.

Caroline Bremner of Euromonitor International said, “The study has identified a key issue or trend that will drive the travel and tourism industry forward over the next five years. Such issues include the rise in number of tourists traveling from Asia to Europe, the increasing segmentation of the travel market in the U.S. and the impact of the gaming industry on tourism in Asia.”

According to the report, the flow of inbound tourists from Asia to Europe continues to grow, particularly from China and India, but Europe appears to be falling short on meeting expectations and demand for key infrastructure and services.

With regard to the United Kingdom, the report finds that the number of single travelers continues to rise but the singles market is underdeveloped and should provide for those travelers looking for adventure and experiences, and for those looking for a potential partner.

While in the U.S., companies are creating more custom packages for different life stages, such as “babymoons” for expecting couples, teenage sleepovers and travel packages for grandparents.

In Asia, changes in legislation and consumer attitudes towards gaming have made it the fastest growing gaming market in the world, and Macau is set to overtake Las Vegas. Demand in not just within Asia, but from Europe and the U.S., and is driven by the expansion of low cost, long haul airlines.

The Middle East continues to diversify its revenues by investing in travel and tourism, and new airlines have emerged to compete with Emirates Air. Dubai is quickly becoming a global aviation hub, and the region is forecasted to experience strong inbound arrival growth over the next five years.