The Olympic Flame for the European Special Olympics begin held in Italy until the 6th of the month, sailed from Patras aboard Blue Star’s ferryboat Blue Horizon.

A special ceremony for passing the flame was held at Plateia Agios Nikolaos in Patras, which is the cultural capital for Europe this year, before the flame was taken aboard the ferryboat.

In keeping with its corporate social policy, Blue Star Ferries once again supported and facilitated transportation of the torchbearers, and hosted a gala reception aboard the Blue Horizon. 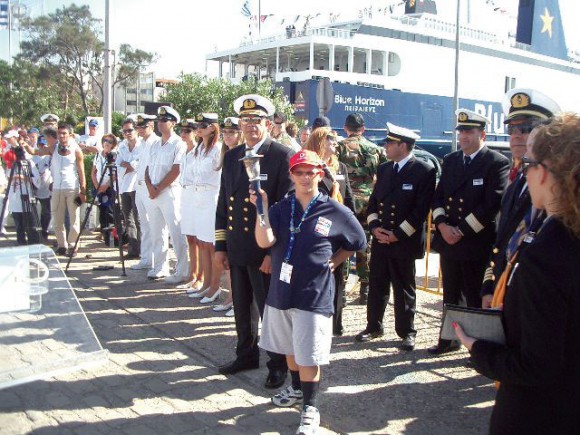 Captain Charalambos Tsimaras and the torchbearer with the Blue Horizon crew before sailing to Italy.

Numerous factors contributed to the group’s increased revenue. One was the improvement in load factors on the Cyclades and Dodekanissos routes, where despite the 19.1 percent fewer sailings compared to the same period last year, the total volume carried increased significantly in terms of passengers, private vehicles and freight units. Another was the significant increase in the freight carried between Greece and Italy.

Finally, operational profitability for the Group (EBITDA) improved considerably despite the continuous increase in fuel oil prices. Total fuel and lubricants expenses for the Group rose by 41.7% compared to last year despite fewer sailings. Nevertheless, operational profitability improved because of the significant revenue growth, the deployment of vessels on routes that can be exploited year-round, the decrease in other operational expenses of the vessels, maintaining distribution and administrative expenses at about the same levels as last year.

In July 2006, the Group’s parent company, Blue Star Maritime S.Α acquired the total assets of Dane Sea Lines through an auction that included the ferries Diagoras, Patmos and Rodos. The ferry Diagoras was deployed on 12th August to the Dodecanese Islands’ routes, where our Group now offers daily sailings with vessels Blue Star 2 and Diagoras.

Greece Would Draw Millions of Tourists as a Cruise Hub