Greece Would Draw Millions of Tourists as a Cruise Hub 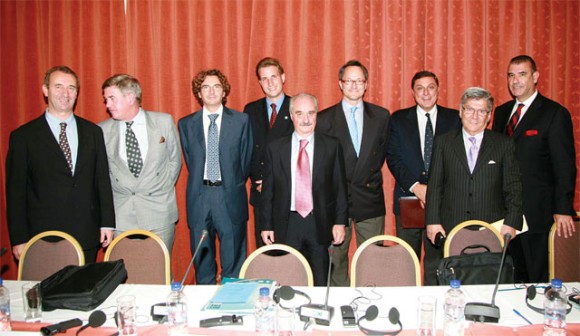 Making Greece an international cruise hub for the eastern Mediterranean would bring five million tourists in a few years and tremendous financial returns were the main conclusion drawn from the forum organized by the Hellenic Association of Travel and Tourist Agencies (HATTA) on world tourism day.

The cruise industry must be viewed as an independent international tourism industry and not just as a form of tourism. The cruise industry attracts 11,000,000 passengers worldwide every year. Of that total number 3.2 million passengers come from the rapidly growing European market, said Bill Gibbons, the panel moderator and marketing director of the European Cruise Council.

In fact, the cruise industry in the Mediterranean is expected to develop rapidly and to quickly approach that of the Caribbean, and at the same time offering tremendous opportunities for employment and income.

Cabotage’s role in damaging a country’s cruise industry was brought up by several speakers. Larry Pimentel, president and CEO of Sea Dream Yacht Club, used the U.S. as an example where cabotage laws passed in 1886 to protect shipbuilding interests and seafarers had the opposite result. Not only does the U.S. build fewer ships and have a smaller population of seafarers than any other coastal nation its size, but millions of dollars in revenues from the cruise industry have benefited other countries, like Mexico and Canada. Mr. Pimental concluded that should Greece decide to lift the cabotage laws and work towards becoming a cruise hub the opportunities would be excellent. 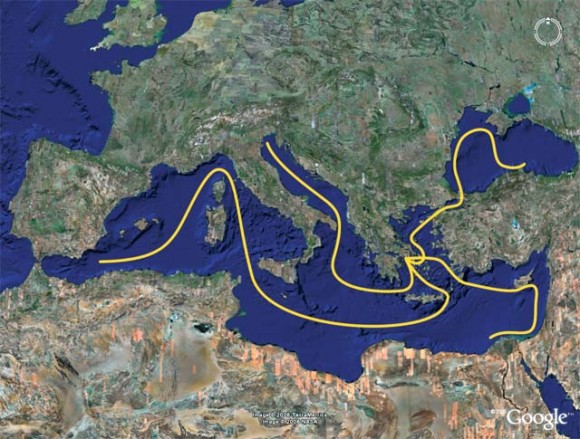 Butterfly Cruises” From Greek Ports. Source: The Birth of Hub Ports and Outport Destinations by A. Napp and F. Naumann.

George Stathopoulos, managing director of Louis Hellenic Cruises, the major cruise company operating out of Greece, said “that in spite of the restrictions, the major international cruise companies are getting the biggest market share by cruising in the east and west Mediterranean utilizing foreign embarkation ports and use Greece and the Greek islands as their core destinations.” From a study the company made this year about “700,000 passengers visiting Piraeus and the Greek islands have embarked from foreign ports,” he added.

Mr. Stathopoulos pointed out that liberalizing the market would have to be done very carefully and with serious consideration of the impact on the various stakeholder groups, such as the seafarers and ship yards, so that they are not put at a disadvantage.

Other speakers provided examples of the successes of European ports in Spain and Italy, where there are no legal limitations, and outlined the many of benefits of the cruise market. Given this information, not only could Greece hope to attract million of tourists in several years, but employment opportunities would increase for Greek seafarers and for a range of related businesses, such as naval repair, provisioning, hotels, restaurants, entertainment, as has been the case in Italy.

Mario Sennacheribbo, managing director of Baleares Consignatarios, presented data verifying the great success enjoyed by Palma and Barcelona as cruise hubs, and noting the public investments made for both ports as well as the great financial returns. Most notably, the number of tourists arriving in Palma increased by 412 percent over a ten-year period, while in Barcelona tourism arrivals increased to 920 percent in just few years.

Frederik Naumann of Sartori and Berger discussed the importance of investing in state-of-the-art facilities, but also brought up the concept of butterfly cruises. This concept in the cruise industry is used for homeports that due to their geographic location can serve as the link between very different destinations. The port of Kiel, for example, has cruises going east to the Baltics and west to Norway.

Mr. Naumann pointed out that Greece has the prime location for butterfly cruises with a possibility of “four wings” with cruises going northeast to the Black Sea; south to Israel, Cyprus, Egypt; west to the Ionian and Adriatic; as well as the western Mediterranean, Malta, Italy, Spain France.

The large international cruise companies would be interested in establishing themselves in Greek harbors of Piraeus and Heraklion as a starting point. Once Greece has a home cruise port, many more coastal areas of the country will be included on cruise itineraries because the travel distance will be shorter and more harbors in Greece will benefit. The area surrounding a home port benefits substantially from tourism because many cruise ship passengers stay on shore for several days before and after their cruise, providing business for area hotels and all other types of tourism services.

Laurent Monsaingeon, president of MedCruise, discussed the development of ports in the Mediterranean. Mr. Monsaingeon outlined the key criteria for establishing a home port for cruises as being a world class destination, having excellent airlift capacity and transportation, a modern passenger terminal, jumbo-sized berths, and no cabotage.

Mr. Monsaingeon said that Mediterranean countries with small harbors needed to implement careful policies on a local and national level to coordinate the arrivals of jumbo ships to avoid environmental and social problems. He brought up the “management through collaboration” for jumbo cruise ships visiting the French Riviera, where in Nice and Villefranche the industry is managed so that jumbo cruise ships do not arrive simultaneously and that the number of passengers on Sundays is limited.

John Tercek, vice president of Royal Caribbean, said that cruise ship itineraries are planned two to three years in advance and are focused on the net ticket yield for the ship and fleet, maximizing on board revenue and shore excursions, controlling the cost for fuel and port costs, cost effective logistics – home porting and provisioning, and maximizing guest satisfaction. The itineraries are a mix of expensive and cheaper destinations, and include some days at sea and at good spending ports.