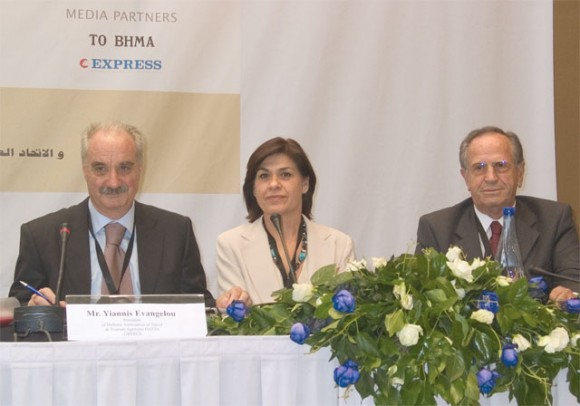 Greece is aiming to be one of the top five tourism destinations, said Tourism Minister Fani Palli-Petralia, at the first forum organized by the Arab-Hellenic Chamber of Commerce & Development. The minister added that “this is an achievable goal since the country is ranked 15th while studies show that it is only using 15 percent of its tourism potential.” For 2007, Greece is making a special program for the Arab countries and a new national tourism office will be set up in Dubai.

The forum titled, Historic Relations and New Horizons for Cooperation, was organized to exchange information on the current situation, to expand economic cooperation between Greece and the Arab countries, and to outline future trade relations.

At the session on tourism, Joseph Sarkis, the Lebanese minister of tourism, described the destruction to the country’s tourism and infrastructure during the recent conflict with Israel and thanked Greece for its support. Mr. Sarkis described the government’s plans to boost tourism and put Lebanon back on course. These efforts will focus on strengthening conference tourism and exhibits, organizing festivals, expanding cultural tourism and educational visits, and expanding cruises and marine tourism. Two conferences have already been planned for Beirut in the upcoming months, the World Tourism Organization meeting in December, and a meeting of the tourism ministers of the Middle East in April 2007.

Dr. Aribi Mazoz, Libya’s under-secretary of the General People’s Committee for tourism, presented his country’s tourism development strategies including new laws for investment and tax relief, and improvements to the infrastructure. This year, Libya had 64 foreign investors and 7,000 hectares of land for tourism investment. The country’s offers a long coastline ideal for sun and sea tourism, but also has a wealth of cultural sites dating as early as 7,000 B.C. and associated with various civilizations, such as ancient Greek, Roman, and Arab.

Giorgos Karabatos, president of the Messinia chamber of commerce and executive director of the Routes of the Olive Tree foundation, spoke about the olive routes as an important initiative to link olive-producing regions of the Mediterranean and promote tourism. This program (recognized by UNESCO in 2003 and the EU in 2004) highlights the products of the olive tree, encourages trade, and educates the public on the history and culture of the olive through various events such as food and music festivals and exhibits. Also, the foundation is planning a museum of Mediterranean culture in Kalamata.

Finally, Evangelia Maslarinou, chief commercial officer of Olympic Airlines, explained that Olympic was the first airline to link Greece with the Arab world. To support today’s increasing tourism and business travelers, the airline has an extensive network of flights between Greece and destinations such as Dubai, Kuwait, Cairo, Lebanon, and Alexandria.

The operations office for the forum was Athens-based Diexodos International Business (D.I.B.), and the event was held under the auspices of the Greek ministry of foreign affairs.

International Tourism Exhibit To Be Held in Athens