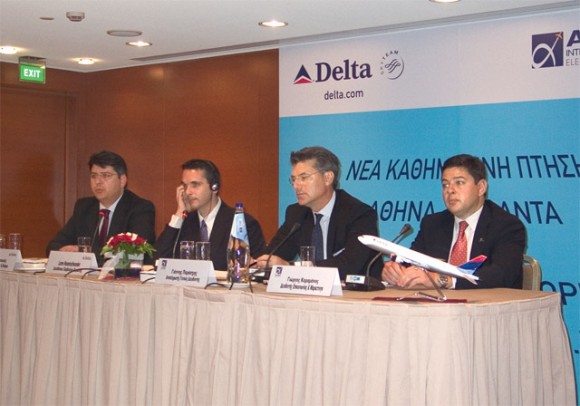 Last month, Delta began its daily direct flights to Atlanta International Airport in the south-eastern U.S., the airline’s most important hub and the largest airport hub in the world. This flight gives passengers countless convenient connections to destinations to more than 200 cities across the U.S., as well as Canada, the Caribbean and Latin America.

Loren Neuenschwander, Delta’s managing director Atlantic Region, said, “This new flight to the world’s largest airline hub brings added convenience and travel options for business and leisure passengers to and from Athens, to connect to some 127 non-stop destinations worldwide, particularly key business destinations such as Chicago, San Francisco, Los Angeles and Washington, D.C. and leisure destinations such as Miami, Orlando, Phoenix and Tampa.”

Dimitris Lambadarios, president of the Greek national tourism organization (GNTO) said “North America is one of the most significant markets for Greek tourism and we are happy that Delta is offering a second daily flight to the U.S., both boosting tourism and giving the public new options. In 2005, tourism arrivals from the U.S. to Athens doubled reaching about 80,000, we expect that the increase in direct flights to the U.S. and Canada will lead to an increase of tourists in 2006 of about 30%. The high load factor through October, and the GNTO’s continued promotional efforts, should permit Delta to continue this flight through the winter months.”

Delta is the only U.S. carrier offering the Greek business and leisure travelers greater choice of connections to America and beyond. Delta also offers a daily non-stop flight from Greece to New York’s JFK. Delta Air Lines offers flights to 447 destinations in 96 countries on its airplanes and its worldwide partners.