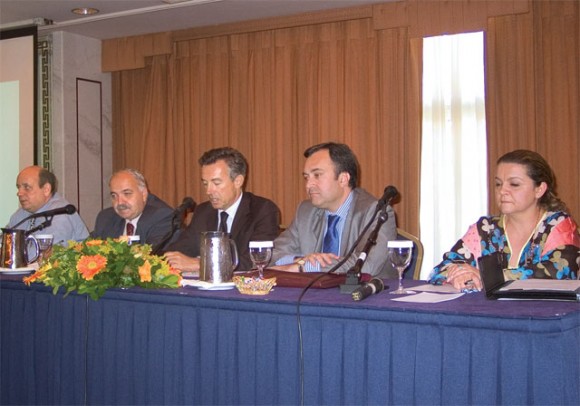 Bankcards for members and an internet portal are among the priority plans presented by Andreas Andreadis, president of the newly elected board of the Panhellenic Federation of Hoteliers (POX).

Mr. Andreadis introduced POX’s new board members and told members of the press about the first council meeting of the presidents of hotel unions, including POX and 40 other hotel unions from around Greece, where Tourism Minister Fani Pali-Petralia was special guest speaker.

Mr. Andreadis discussed POX’s two priority programs presented at the meeting and being actively pursued.
One is getting a special bankcard service, B to B (or business to business card), exclusively for POX members and members of local hotelier associations. POX is seeking a bank to work with enabling cardholders to get good terms for usage and transactions, and insurance, as well as special discounts. As there are about 9,000 hotel owners in Greece, POX believes such a card will help to strengthen and support them. Cardholders will be able to cover business needs, to regulate running transactions and to have easier terms for purchases and commissions.

Mr. Andreadis provided one example in terms of purchases, made by hotels of items normally used, such as food, beverages and equipment, saying that “most of the hotels in Greece are small to mid-sized and their costs for these basic goods tend to be 10-15% higher than what larger hotels pay. The bankcard system will help them get better prices and increase competition.” POX has already received strong interest from banks and is expecting their offers soon.

Creating and operating a modern, user-friendly portal is POX’s other priority. The portal is envisioned as a source of information for users on topics such as marketing, branding, renovation and management. This portal is also part of POX’s plan to fully computerize its services, to simplify administrative procedures, and provide faster and better service.

Mr. Andreadis concluded by saying that “this year’s tourism season seems to be better than last year, with the Aegean islands getting more business than the Ionian islands that depend on the British market, which is slow now.”