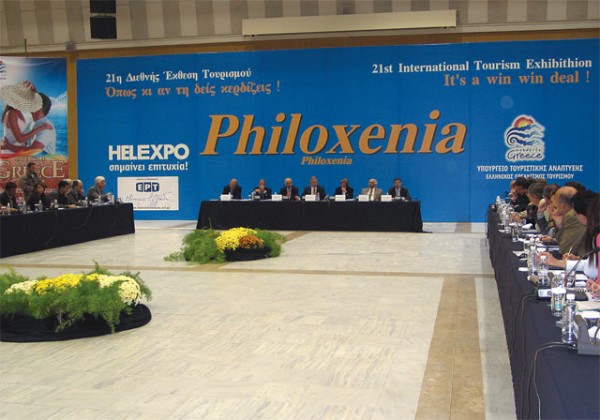 The amount of business done during Philoxenia, Greece’s major tourism fair held last month in Thessaloniki, surprised most exhibitors this year. Another surprise was the traffic. Although it wasn’t evident, Helexpo, the fair’s organizer, said Philoxenia attracted  23,790 visitors, 48 percent more than in 2004. And the event hosted 696 exhibitors from 20 countries plus 15 official national participations, compared with 10 the year before.

Side events during the fair also showed a bit of an improvement over last year. The National Tourism Council meet under the chairmanship of Tourism Development Minister Dimitris Avramopoulos, and thus helped underscore the significance of the Philoxenia, and its contribution to promoting the Greek tourism product.

The Thessaloniki Convention and Visitors Bureau and the Hellenic Association of Professional Congress Organizers held an international event on conference tourism as an alternative form of tourism, the development of which is one of the country’s tourism policy objectives as it supports the extension of the tourism season to the whole year.

During the event, under the title “Conference Tourism: The Big Challenge,” delegates heard wise words from speakers from the United States and Great Britain who tackled the modern conference market (the size of the market in Greece and internationally, infrastructure needs), convention and visitors bureaus and conference tourism (their role and the benefits of conferences for a city), and what makes a conference center to stand out (modern technologies, state or private investments). 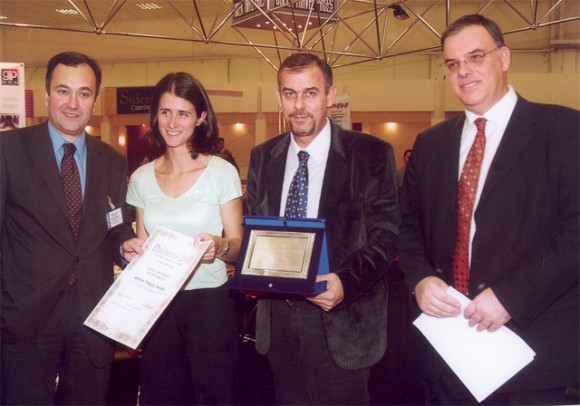 Helexpo President Aristotelis Thomopoulos with GTP’s Maria Theofanopoulou and Thanassis Kavdas presenting the Helexpo award for GTP’s 21 years of solid support to the fair and for the company’s organizational skills.

Political and economical speeches were also numerous during the fair. According to the tourism minister, the Greek tourism sector will manage a leap forward in 2006 with the promotion of several ambitious plans that will set the stage for it to account for about a quarter of the country’s income in 10 years’ time.

“If the targets set are attained and the new standards and specifications are observed, we foresee that the tourism business will be 30-35 percent larger by 2015, and revenues will represent about 25 percent of gross domestic product, against 18 percent today,” said Mr. Avramopoulos during a press briefing.

He said plans include new charter terminals at the military airports of Andravida and Anghialos in the western Peloponnese, and the development of the country’s numerous spa facilities, on the basis of legislation that will “settle many outstanding issues.”

The minister added that six or seven large foreign investment schemes are making progress while others, long blocked, will follow. “Foreign investors in the tourism sector will soon find a very friendly environment in Greece, while the law on public/private investment partnerships will open up new prospects,” he said. 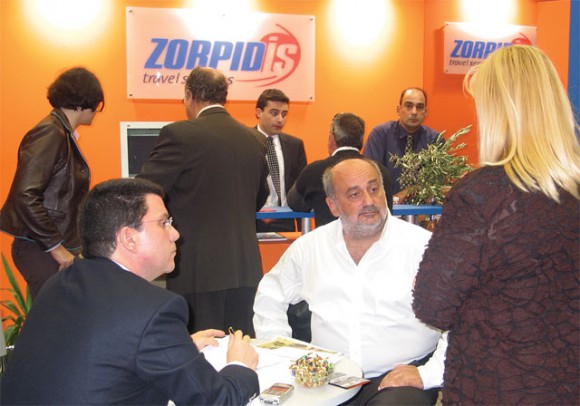 The Zorpidis Tourism Organization stand was without a doubt the busiest professional stand within the fair. Here, Michalis Zorpidis (center) stickhandles clients, customers and staff as he did throughout the four days of the fair.

At a separate press briefing, the Hellenic Association of Tourist and Travel Agents said the application of the European Commission’s directive for a single market in services would be catastrophic for Greece, as it would allow companies to choose as a base any member state that offered tax advantages and transfer staff from it to the others where it may maintain branches.

Regarding calls for amending the directive on organized tours, the association’s president, Yiannis Evangelou, said European consumers want greater protection during their travels but that this would mean higher prices.

Helexpo President Aristotelis Thomopoulos, during yet another press briefing, said that apart from the existing exhibition center in Maroussi, the company plans to create a second major exhibition center and to license the use of the conference center at the Olympic “tae kwon do” venue in Faliron, all of which “will help to realize the plan toward making Greece’s state exhibition and conference organizer more dynamic.”

Already the company’s management is looking for the right site for the needs of a big conference center of international standards in the broader Athens region to satisfy the demands of  professional bodies in the capital, he said.

Press reports say that Helexpo may also show interest in the plot adjacent to its conference center in Maroussi, owned by the  Olympic Stadium.

Separately, Thessaloniki conference bureau TVCB officials said that a group of local businessmen, in collaboration with the city’s municipal authority, have managed to increase the number of conferences organized in the city from 39 in 2001 to 115 last year. 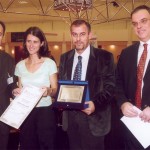 Helexpo President Aristotelis Thomopoulos with GTP's Maria Theofanopoulou and Thanassis Kavdas presenting the Helexpo award for GTP's 21 years of solid support to the fair and for the company's organizational skills. 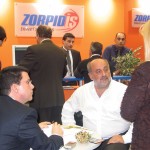 The Zorpidis Tourism Organization stand was without a doubt the busiest professional stand within the fair. Here, Michalis Zorpidis (center) stickhandles clients, customers and staff as he did throughout the four days of the fair. 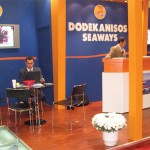 Rodos-based Dodekanisos Seaways, founded in 1999 to join the 12 islands of the Dodekanisos group with fast catamaran services, promoted its new passenger ferry, the 341-seat Dodekanisos Pride, during the fair. 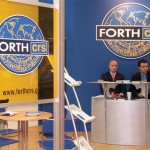 ForthCRS specialists were on hand to promote its SeaOnLine (ferry bookings), its RoomView (hotel bookings) and its single application Open Seas for ferries, and launched its new CARcrs for car rental bookings. 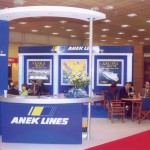 Chania-based Anek Lines, founded there in 1967, presented its 10 ferry vessels that sail both the domestic routes from Crete to Piraeus and Greece-Italy routes. The company recently sold its RoRo vessel Aptera. 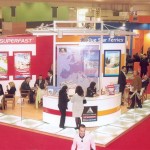 The Attica Group, major shareholder of both Superfast Ferries and Blue Star Ferries, for the first time at a Philoxenia fair exhibited both ferry companies on the same stand. Led by impressive Blue Star profits, the group once again increased profits. 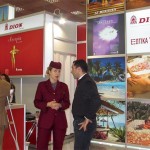 Qatar Airways was the special guest on the Dion stand at this year's Philoxenia. The airline works closely with Dion in creating exotic tours. Dion, based in Thessaloniki for more than 27 years, specializes in organized tours, especially to the Far East and Austria, as well as domestic tours. 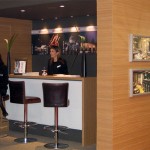 The elegant staff of Les Lazaristes check out the award received for their Philoxenia presentation. This luxurious new 5-star hotel in Thessaloniki is dedicated to culture and the arts and proves so with its 74 inviting and spacious rooms. 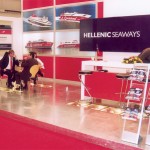 Hellenic Seaways (Flying Dophins) continued its rise in the marketplace with a fine presentation at this year's fair. The ferry line received Helexpo's best creative award for its stand. 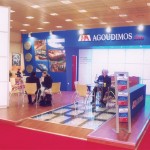 Agoudimos Lines created its most professional stand, complete with top-notch professionals to promote the ferry line. This year, the family-owned company placed its Penelope vessel on the Thessaloniki-Dodecanisso-Crete route and opened a Patras-Igoumenitsa-Bari route. 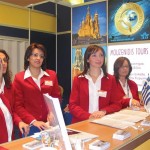 Thessaloniki-based tour operator Mouzenidis Tours went all out this year at Philoxenia in celebration of its 10th anniversary with receptions and a full compliment of staff. The company, besides worldwide packages, places a special emphasis on travel to and from Russia. 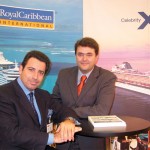 Andreas Stylianopoulos of Navigator Travel with George Paliouras, who recently left Cruiseplan and is now director of sales at Louis Hellenic Cruises. Mr. Stylianopoulos said he was surprised and very pleased with the amount of work he and his staff handled during the fair. 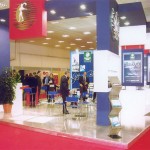 Minoan Lines of Crete continues its annual trek to Philoxenia as well as to more than 20 travel fairs in the world, mostly in Europe. The ferry line sports a modern fleet of eight ferry vessels and has an excellent reputation for customer service.