The fourth annual tourism conference organized by the Association of Greek Tourism Enterprises welcomed speakers from 10 countries this year. On opening the conference, the association’s president, Stavros Andreadis, said that since the last conference there has been no change in the Greek tourism product, except for Athens. He urged the hundreds of Greek delegates to work toward higher quality products.

He was followed by Deputy Tourism Minister Anastassios Liaskos who inferred that next year more than 60 million euros would be spent by government on tourism promotion, which will concentrate on new markets and post-Olympic possibilities.

Mr. Liaskos told the conference that the era of missed opportunities for Greek tourism is definitely coming to an end thanks to a radical policy reorientation that would address chronic problems.

He said legislation now in the works would set new priorities for tourism development in zoning regulations and lift geographic restrictions on the building of four- and five-star hotels.

Other arrangements would facilitate the issuing of licenses and promote grants for alternative forms of tourism. Through the Greek Cuisine program, entrepreneurs will be certified with a special sign of the Hellenic Tourism Organization and receive grants for upgrading their units. There will also be promotion of sports and cultural events in Greece.

Of particular interest to delegates were the talks by guest speakers on the conference’s topic, Tourism and Development. The first speaker was Harold Harvey of the Monitor Group. 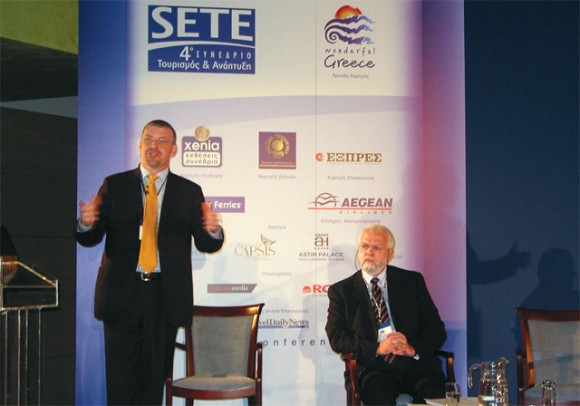 Harold Harvey of Monitor Group speaks on competition and promotion and is being closely followed by the moderator of the session, Robert McDonald of the Economist Intelligence Unit.

Mr. Harvey stressed that it was up to the private sector, not government, to get promotion right since companies compete, not the state, and companies entice customers, not the state. As well, he said that this requires forward thinking and working together with “cluster” groups – for example coastal shipping, hoteliers, conference organizers, etc.

“Cooperation is most difficult among companies,” he said, “but this must be done as it’s the only way forward….Play together and win.”

As for advertising, he suggested that it was best to concentrate on major markets and in the case of Greece this meant about 10 countries and specific cities of these countries. He said it seems silly to try and promote a destination in 250 world countries and territories.

During the conference’s second session, E. Bordas of THR in Barcelona spoke on a study done for the conference organizer entitled  “An Analysis of the Competitiveness Indicators in Mediterranean Destinations,” which dealt with resorts in Greece, Spain, Turkey, Egypt, Croatia, Cyprus and Portugal.

He said in his speech that the Greek tourism industry had a lot of success thanks to its capacity to offer gratifying vacations at reasonable prices. “Tourism has been, without any doubt, an important fountain of prosperity for Greece. But that prosperity could seriously be threatened by a decrease in the industry competitiveness and in its capacity to retain the created value.

“The major part of the competitiveness is created at local level of the destinations. And there are destinations where being competitive is easier/ more difficult than in others. 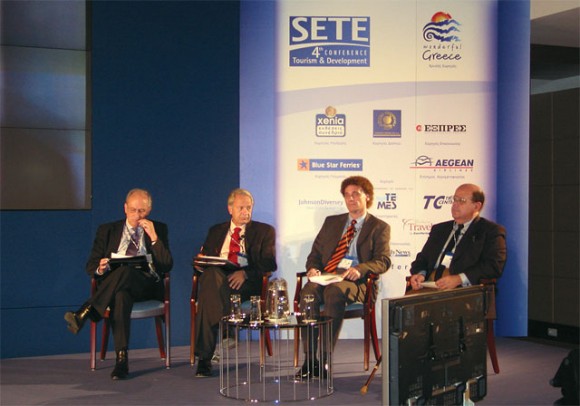 Some results from the study show that tourists in Greek destinations are satisfied with their chosen destination.
The unsatisfied tourists are only: 5% in Athens, 7% in Zakynthos and 4% in Heraklion.

As well, tourists don’t see clear competitors of Greek destinations. Barcelona and Rome are the most mentioned alternative destinations for Athens, but only for a 13% of tourists.

The crowd, the traffic and the lack of environmental care are the worst elements of Greek tourist destinations, while the friendliness and hospitality of Greek people is the factor that the tourists evaluate best.

Greece appears to suffer from under-investment in hotels; about 77 percent of them are more than 20 years old, while only 15 percent belong to or are grouped in with chains; 66 percent of Greek hotels belong to the one- and two-star categories.