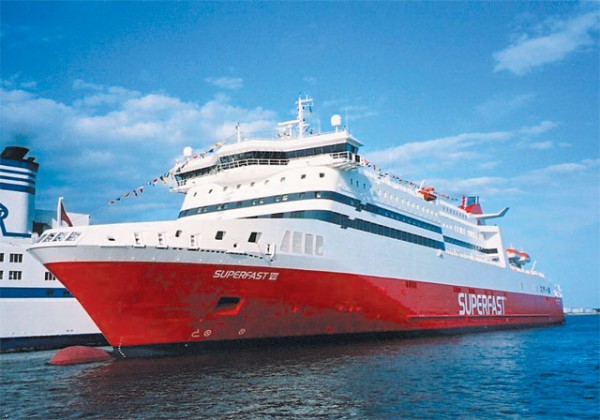 The Attica Group’s Superfast Ferries company, which runs Scotland’s only direct route to the European mainland from Rosyth to Zeebrugge, was selected ‘Best Ferry Company’ in the 19th Guardian, Observer and Guardian Unlimited Travel Awards 2005.

The award is chosen by readers of the Guardian and Observer newspapers as well as the Guardian Unlimit-ed online service and is the longest-running inde-pendent survey of its kind.

Superfast won the award ahead of Swansea Cork Ferries and Stena Line who finished second and third among 27,000 completed questionnaires submitted this year. “We are delighted to have our service recognised and all the more so when it is recognised by travellers themselves,” said Superfast Board Member and Director of the North Sea route Yannis Criticos on receiving the award.

“I wish to thank our staff on board and ashore for their hard work in winning this award. We will continue to work tirelessly to provide a high quality service to all our passengers across Europe.”

In January of last year, Superfast was rated the best North Sea ferry service by leading consumer magazine, Holiday Which?

The Scottish Passenger Agents’ Association, said to be the oldest travel trade association in the world, voted Superfast Ferries the “Best Ferry Operator” in November of last year with 700 travel agents in Scotland voting for the award.

In July, 2005, Superfast Ferries was presented with the highest award, of a four star grading in a new international ferry category by VisitScotland, recognising Superfast as an exceptional example within Scotland’s tourism industry. Superfast Ferries is a subsidiary of the Attica Group, which operates 18 ferries across Europe through its subsidiaries, Superfast Ferries and Blue Star Ferries.

In addition to the North Sea service, Superfast Ferries operates daily services in the Adriatic Sea between the Greek ports of Patras and Igoumenitsa and the Italian port of Ancona with four Superfast ferries.

In the Baltic Sea, Superfast Ferries offers daily connections with two Superfast ferries between the ports of Rostock, Germany and Hanko, Finland, in a crossing time of 21 hours.

Blue Star Ferries offers daily services with two ferries in the Adriatic Sea between the Greek ports of Patras and Igoumenitsa and the Italian port of Bari. In the Greek domestic market, Blue Star Ferries operates six vessels between mainland Greece and the Greek is-lands, serving all main destinations such as Myco-nos, Paros, Santorini, Kos and Rodos.

The group’s consolidated results for the first half 2005 show a net profit of  2.9 million euros, compared with 6.4 million for the same period last year.

It should be noted that the first half of 2004 included extraordinary income of 5.9 million euros from the sale of vessels Superfast I (built in 1995), Blue Bridge (built in 1976) and Blue Sky (built in 1974), which when excluded for comparative purposes, show this year’s net result improved over the previous year.

Superfast says the financial results for the first half of 2005 and those of the same period in 2004, are reported for the first time under International Financial Reporting Standards and as at 30th June, 2005, show total net equity, including minority rights, at 458.2 million euros, cash and cash equivalents at 84.5 million euros and fixed assets at 1,138 million euros.

Aegean Picks Up Yet Another Quality Award