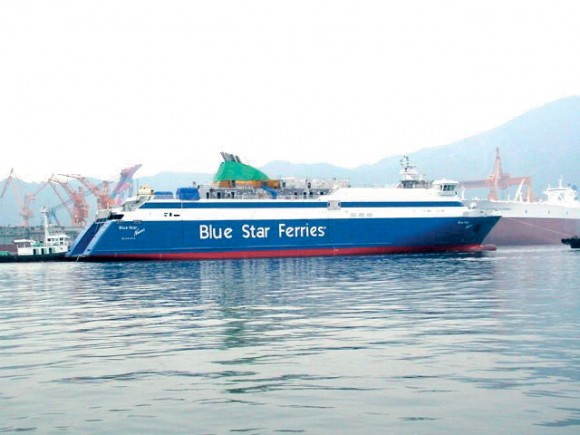 More than one-half of the present fleet would have to be taken out of service by 2008 due to age limitations. the country’s ferry sector now floats 41 ferry vessels compared with 50 that were registered in 2003.

In its annual study on the sector, the company said there was a need for Greek ferry companies to strengthen cooperation so as to confront competition expected from abroad.

Of utmost importance, said the study, is the liberalization of the sector by government quarters so that ferry companies could see their way clear to replace aging vessels.

According to the study, the country’s ferry sector now floats 41 ferry vessels compared with 50 that were registered in 2003.

As well, it said more than one-half of the present fleet would have to be taken out of service by 2008 due to age limitations (a maximum of 30 years) set by government.

Greece’s six major ferry lines racked up revenue of 935.3 million euros last year, which marks a drop of some 4% against the year before.

The sector’s listed companies, cited above, claim that they are expected to implement social policy in the form, particularly, of fare ceilings and discounts for a host of social groups, but also a spate of regulations at operating level such as the setting of specific routes and crew composition. They also complain that at the same time no protection is offered against adverse developments such as the rising price of fuel.

On the other hand, the state is expected to meet the considerable requirements of an especially complicated island pattern.

Its obligation to ensure the social character of coastal shipping, with a view to maintaining the country’s territorial continuity and securing the prerequisites for the islands’ economic development, constitutes a heavy “political weight” whose compatibility with the entrepreneurial spirit of operating companies requires particular resolve and boldness.

The study notes that the harmonization of the existing legal framework with that of the EU, under the threat of the country’s referral to the European Court, poses new goals and creates new opportunities, liberating the operators from being agencies of social policy and casting them as fully competitive entities.

The envisaged government support at an oversight level should upgrade the sector and create new opportunities for investment. The biggest present problem is the lack of vessels and new ships, which is certain, if the current situation persists, to lead to its shrinking.

The rise in profitability over the last two years should not lead to complacency, the report says, as this could be due to a rise in capacity utilization given the lack of vessels.

“This is a very delicate balance and the government should discriminate in its strategy toward the companies.”

The report adds that the state should be credited with coordinating the improvement of port infrastructure, which has been a standing demand of ferry operators in recent years, particularly after the extensive modernization of the fleet.

But the recently announced loan from the European Investment Bank toward that end may be spent elsewhere, say recent press reports.

Freedom for Coastal Shipping, or Bust

Blue Star Ferries Back in the Black