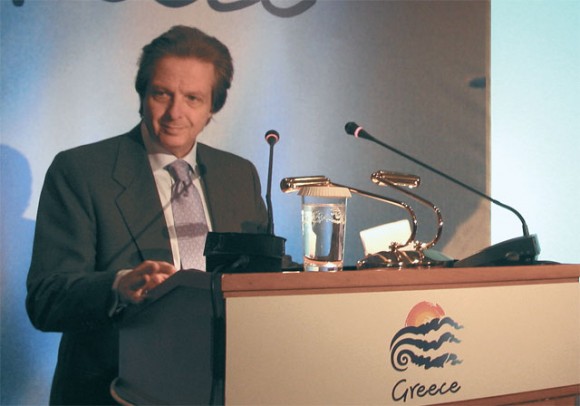 Aristidis Kalogeropoulos, president of the Hellenic Tourism Organization, introduces Greece’s new tourism promotion campaign. He also announced a program for domestic tourism with the slogan “We Stay in Greece.”

Greece’s spending on tourism advertising will reach record highs in 2005, approaching 60 million euros. Tourism Development Minister Dimitris Avramopoulos announced last month that of the 31.8 million euros promised, Athens will fork out another 28 million euros for supplementary focused campaigns from the government’s share in the gross profits of the Mount Parnes and Corfu casinos.

As well, Mr. Avramopoulos told a meeting of senior tourism and regional officials that an additional sum of 15 million euros is being given to regional authorities for tourism promotion campaigns, as part of a drive to bolster the role of the regions in the industry. The regional campaigns, he said, would be harmonized with the overall national campaign, which would put an end to past wasted expenditures where the programs did not clearly define the country’s tourism identity.

“Regional mechanisms will be activated and we shall soon see the country’s picture changing for the better: sign-posting, safety markings on roads, cleanliness and tidiness and a civilized environment – that is our goal. Otherwise, any tourism policy will have no substantial result,” said Mr. Avramopoulos.

Greece has just had its most “visible” year ever, with 3 billion people tuning in to the Athens Olympics, which fairly beg to be capitalized on. Despite the visibility of the Games -or perhaps because of the bad publicity in their buildup- 2004 was a poor year, with arrivals down some 6 percent from 2003.

To take advantage of the Games, the Greek National Tourism Organization recently unveiled its eye-catching new advertising poster, “Live your Myth in Greece.”

Tourism Minister Dimitris Avramopoulos said the main goal was “to capitalize on the successful staging of the Olympic Games and project the country’s quality tourism services offered in a fully secure environment.”

Tourism and shipping are Greece’s biggest industries, with the former accounting for around 15 percent of GDP. Greece gets about 3.5 percent of all tourist arrivals in Europe, over 14 million in 2002, and that year ranked 10th worldwide in foreign tourist receipts at nearly $10 billion. The strong euro eliminates Greece’s bargain-basement past allure, compared with non-eurozone places like Turkey, Tunisia or Israel, say Greek travel professionals. As well, service is sometimes slipshod compared with other small eurozone competitors such as Portugal or Austria, they say. “Lacking either lower costs or higher service standards sums up Greece’s 21st century dilemma in this sector.”

Separately, sometime this month the government is expected to announce a call for tenders for the 2006 tourism advertising campaign. But according to Greek tourism professionals, a study for the needs of an international campaign has yet to take place. The professionals say that each market should be studied separately.