Some local tourism professionals, but not all, foresee yet another unhealthy year for Greek tourism because of a weak dollar and stagnant European economies, all of which they say would offset any gains expected from the country’s successful holding of last August’s Athens Olympics.

“We expect no increase in arrivals next year,” Maria Daskalantonaki, president of Tourism Research Institute and board member of Greece’s biggest hotel chain, Grecotel, said during the release of the institute’s annual tourism and economic report.

“With output growth of 2.6 percentage points this year, the European Union is the laggard of the world economy. One realizes how serious this is, considering that 90 percent of our market is there,” she explained. 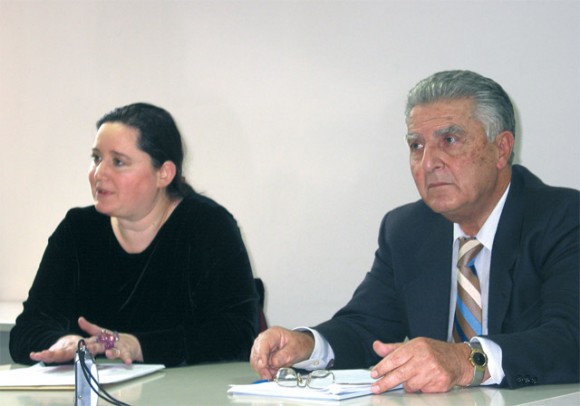 Maria Daskalantonaki, president of Tourism Research Institute and board member of Greece’s biggest hotel chain, Grecotel, with Professor Panayiotis Pavlopoulos, head of research for the institute.

Contrary to Ms Daskalantonaki, Professor Panayiotis Pavlopoulos, head of research at the Tourism Research Institute, which is funded by the Hotel Chamber of Greece and is considered the local tourism industry’s research body, said he expected a global tourism boom and said that post-Olympics publicity gains would benefit Greek tourism next year, even if slightly. “We are cautiously optimistic. It (the Olympics) will be a failure if tourism arrivals increase by less than 5 percent next year,” he said.

However, he did agree that the dollar’s slide against the euro is another negative development because it diverts tourists to other destinations. “It is a huge problem,” Professor Pavlopoulos told the news conference. “Italy and Spain are not our main competitors any more, but rather countries where services are paid for in dollars, such as Turkey, Israel and Egypt,” he said.

Mideast tourist markets benefit disproportionately from the current tourism boom, the professor said, despite fears of extremist attacks against Western targets and tourists there. “If economic incentives are strong enough, people forget about terrorism,” he said.

For Greece, he said this year’s advertising and promotion campaign would play a major role in 2005 tourism results. Whatever the amount of money spent on promotion, he said, it must be spent wisely. “If the campaign is not planned carefully with respect to the message we wish to forward and toward the countries of major tourism importance to us, then the positive results will be minimal.”

Tourism is Greece’s chief moneymaker. According to estimates, the industry accounts for 15 percent of the country’s gross domestic product, making it more important than manufacturing or agriculture.

Final tourism arrival figures for 2004 are expected to decrease compared with 2003, as an unfavorable mix of stagnating European economies, fear of terrorist attacks and Olympics-related construction delays spoiled the country’s image ahead of the Games.

But overall tourism receipts may not fall, as spending per tourist was higher because Olympic tourists spend more than average visitors, Professor Pavlopoulos said.

With tourism receipts of nearly $10 billion (7.7 billion euros), generated by 13 million to 14 million visitors, Greece is the world’s 10th largest tourism destination in dollar terms, according to 2002 figures by the World Tourism Organization.