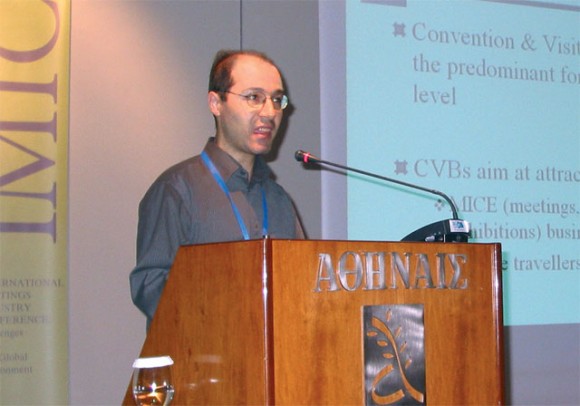 Dimitris Koutoulas, a tourism and marketing consultant, presents an in-depth study on conference and visitors bureaus during a recent Heliotopos conference.

Α global benchmark survey of convention and visitors bureaus (CVBs) was recently released by Dr. Dimitris Koutoulas, a tourism and marketing consultant based in Athens. This survey explores the operational and financial characteristics of CVBs located mainly outside the USA, thus setting industry benchmarks especially from a European perspective.

“Most existing CVB surveys mainly reflect the situation in North America, which has the largest numbers of bureaus,” Dr. Koutoulas said. “There are fundamental differences between continents, especially in regard to financing CVB operations. The American concept of local tourism taxes, for instance, which is the major source of income for US-based bureaus, has yet to be implemented in other parts of the world.”

Of the 29 CVBs participating in the survey, 15 are based in Europe; nine are located in the United States, with the remaining five bureaus being from the rest of the world. The survey revealed, among other findings, that CVBs are a heterogeneous group of destination marketing organizations varying significantly in regard to their geographic scope, shareholders, membership, size, market orientation and funding. Some are independent, cooperative organizations bringing together numerous stakeholders of the tourism industry, while others are departments of government agencies dedicated exclusively to developing the MICE (meetings, incentives, conventions and exhibitions) market. They all operate on a non-profit basis with the aim of attracting meetings and visitors to the destination.

The profile of the average CVB is, according to the findings of the benchmark survey, as follows:
The average CVB represents a destination at the local level, such as an urban center or a resort area. It is a co-operative organization either fully controlled by its public-sector shareholders or run as a public-private partnership.

The CVB targets both the MICE and the leisure travel markets through its marketing activities. Individual tourism businesses can become members of the CVB by paying membership dues. Its annual budget is approximately 6 million Euros.

On average, 56.4% of its funding originates from the public sector, with a further 12.1% being direct income from a dedicated tax. Dues paid by member businesses contribute another 14.9% to its budget. Offering its services to businesses and consumers secures the CVB 11.7% and 3.4% of its income, respectively.

As well, 52.9% of the CVB’s budget goes towards its marketing activities and 30.2% covers wages and other personnel-related costs. Its staff comprises 46 employees. The budget corresponding to each employee exceeds 150,000 Euros.

It is interesting to note that non-U.S. bureaus receive less funding from public sources than their American counterparts (67.5% of total income for non-U.S. vs. 84% for U.S.-based bureaus). The share of private sources is twice as high in the case of non-US bureaus compared with U.S.-based CVBs, with 32.5% vs. 16% of total income, respectively.

European CVBs haven’t, so far, applied the American model of dedicated tourism taxes, which contribute more than 70% to the income of U.S.-based bureaus. This kind of funding secures a steady flow of income for CVBs and motivates them to become more effective in order to maintain and expand visitor flows and, as a consequence, their tax revenues.