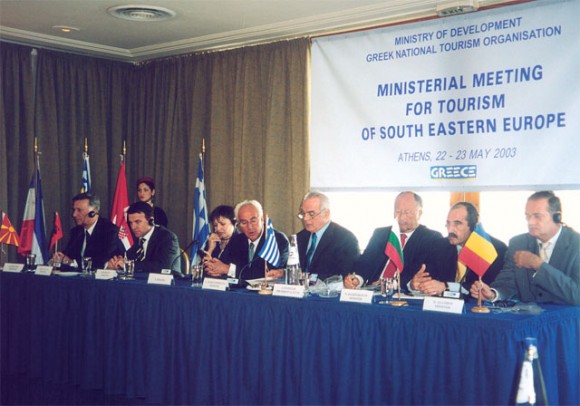 Tourism ministers or their representatives arrived at the Astir Voulagmenis complex recently to sign a tourism cooperation agreement.

Tourism ministers from Southeastern Europe met in Athens recently under the initiative of Greece’s development minister, Akis Tsohatzopoulos, to sign a tourism cooperation agreement. This followed close on the heels of an agreement signed during the Panorama tourism exhibition by travel agency associations of some of the same countries under an initiative of Yiannis Evangelou, president of the Hellenic Association of Travel & Tourism Agents.

And like the agency agreement, Greece is first to host the presidency of the new group. The ministers agreed to meet once a year to decide on tourism policies, while a special high-level tourism committee will meet twice yearly and will include tourism specialists from the private sector as advisors.

In the meantime, the ministers said they would work together immediately in an effort to facilitate tourism traffic among their countries and tourism flows from third countries. All the aforementioned in accordance with their respective laws and regulations and without prejudice to their international obligations.

They also agreed to exchange information and tourism promotional material in an effort to make their tourism attractions better known to the public of Southeastern European countries. And to exchange information and data on their tourism legislation and their policies for tourism development, marketing, consumer protection, ad hoc measures to confront crisis situations, and measures to boost the quality and competitiveness of their tourism services. The presidency of the council of ministers will be annual and assumed on a rotational basis by the participating countries, starting with Greece. The selection of the home of each following presidency will be discussed during the acting presidency by the “High Level Group” on the basis of candidatures presented by the participating countries.

The High Level Group is composed of representatives of the ministers responsible for tourism in the member countries. The group is chaired by the representative of the country that has assumed the presidency. The group meets twice a year and prepares the meetings of the council of ministers. It also acts on and supervises the implementation of decisions taken by the council of ministers.

A third body, a forum, which is made up of the presidents of the professional tourism associations, will act as an advisory council for the ministers and will participate as observers at both the Council of Ministers and the High Level Group.

The forum meets once a year, back to back with one of the annual meetings of the high level group and if possible with the council of ministers. The forum discusses and elaborates proposals for the development of the cooperation of the countries in the field of tourism. The list of the federations and associations that are to participate in the forum will be established by the high level group.

Separately, the northern city of Komotini has been designated “Balkan Center of Gastronomy and Flavors” by Balkan tourism ministers, the Hellenic Tourism Organization announced last month.