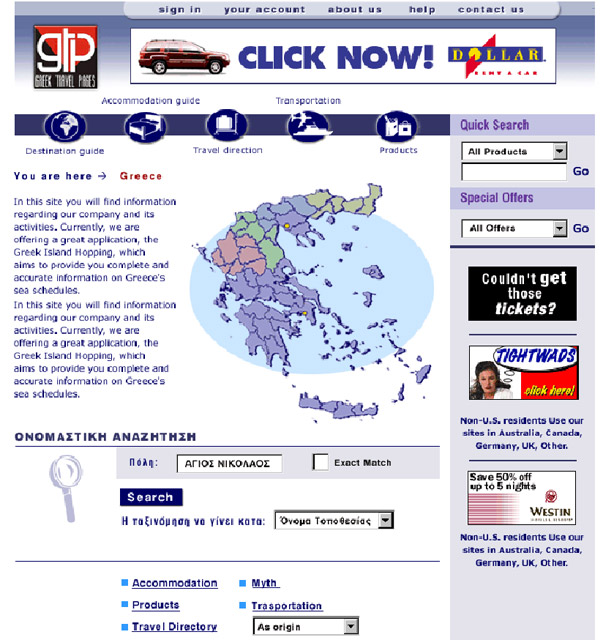 GTPnet.com’s next web phase, now under construction, focuses on informing the traveler and philelene with what we consider to be the world’s best site on Greece as a destination.

The brochure for travel may fade from travel offices within the next decade, according to the latest trends in travel sales. Major tour operators are planning Internet websites, with videos of destinations, to eventually replace the now standard printed brochures, which have become relatively expensive to publish, says the World Tourism Organization.

Parallel to this, television sites like the Travel Channel in the United Kingdom has been most successful, operating 24 hours a day, seven days a week. One prediction in the United Kingdom is that ten percent of holiday packages will be booked electronically next year. This would represent an estimated one million packages.

At a recent travel conference held in Las Vegas it was opined that prices printed in brochures are not valid for very long because of changing trends of bookings. It was also revealed that some nine out of ten brochures printed do not result in any sales.

Further, it was noted at the conference, on television and computer screens prices can be altered on daily basis.

The growing need for destinations to create effective web pages to attract tourists is highlighted in a new report published by the World Tourism Organization Business Council.

According to this new study, “Marketing Tourism Destinations Online: Strategies for the Information Age,” the four main tourism generating markets are also the four biggest users of the Internet. Together, the United States, Germany, Japan and the United Kingdom, account for some two-fifths of world travellers – and nearly 80 per cent of Internet users.

“The technology that is moving the world into the Information Age is providing destination marketing organizations (DMOs) with a cost effective channel through which to reach out across the globe without the high distribution costs of conventional media,” says the report.

“The countries in which the tourists reside are undoubtedly already embracing these new technologies.

“If a destination is not on the Web then it may well be ignored by the millions of people who now have access to the Internet and who expect that every destination will have a comprehensive presence.

“The web is the new destination marketing battleground. If you are not there fighting then you cannot expect to win the battle for tourist dollars.”

With the tendency towards more commercial transactions appearing on destination web pages, the report argues that DMOs must remain the guardians of a destination’s interests and be its main promoters. Because of this, “the model of a fully privatized and commercial DMO is one that may never be successful,” say the co-authors, WTO consultants Paul Richer and Roger Carter.

The report predicts that air travel will remain the dominant online market for the moment because it involves a simple basic transaction. However, its share of worldwide bookings is expected to fall from more than half the $3 billion total taken in 1998 to just over a third the $29.4 billion forecast for 2003. A major factor behind this change is that the majority of current Internet customers are young, budget-conscious adults. “As we move further into the Information Age and all segments of the population become comfortable with booking online, the figures will probably revert to their traditional norms,” say the authors.

The 168-page publication has been designed with a simple objective, said WTO Business Council CEO Jose Luis Zoreda, and that is “to be a single, authoritative source of information that will provide guidance to destination marketing and other tourism organizations on how the online world is developing – and as to how both public and private sectors can participate and benefit.” The study will help demystify the Internet revolution and show the way towards adapting to new technology, he added. “It will become an invaluable tool in preparing future marketing strategies.”
Starting with the core tourism product – the destination – ‘Marketing Tourism Destinations Online’ analyzes the influence of the Internet on the tourism supply chain. It focuses on the changes in consumer expectations that the technology has already created and explores the activities of new entrants in the travel sector such as Internet portal companies and on-line agencies.

Detailed case studies of existing web sites provide an overview of how the market is developing, while for newcomers there is advice on how to develop a successful presence on the web. “For those outside the travel industry, there is a huge opportunity to be exploited,” says the report. “The barriers are down and profitable entry into the industry is easier than it has ever been.” “For those inside, there is an urgent need to review existing models of business and develop a future where e-commerce will be the preferred way to purchase travel.”

While no one argues about the need for sites and their importance to marketing tourism destinations and products, not everyone is positive about online bookings. Although most agree online travel sites have unseated computer sites as the top Web-based retail business, some Internet experts say the majority of travel booking is likely to stay offline, at least for now.

According to online research group eMarketer, online travel sales in the U.S. – which is still far ahead of Europe when it comes to e-commerce – will double this year to reach $12.4 billion. But as a portion of a $221 billion industry, those sales remain a small percentage of the overall business.

More And More Greeks Head For The Hills