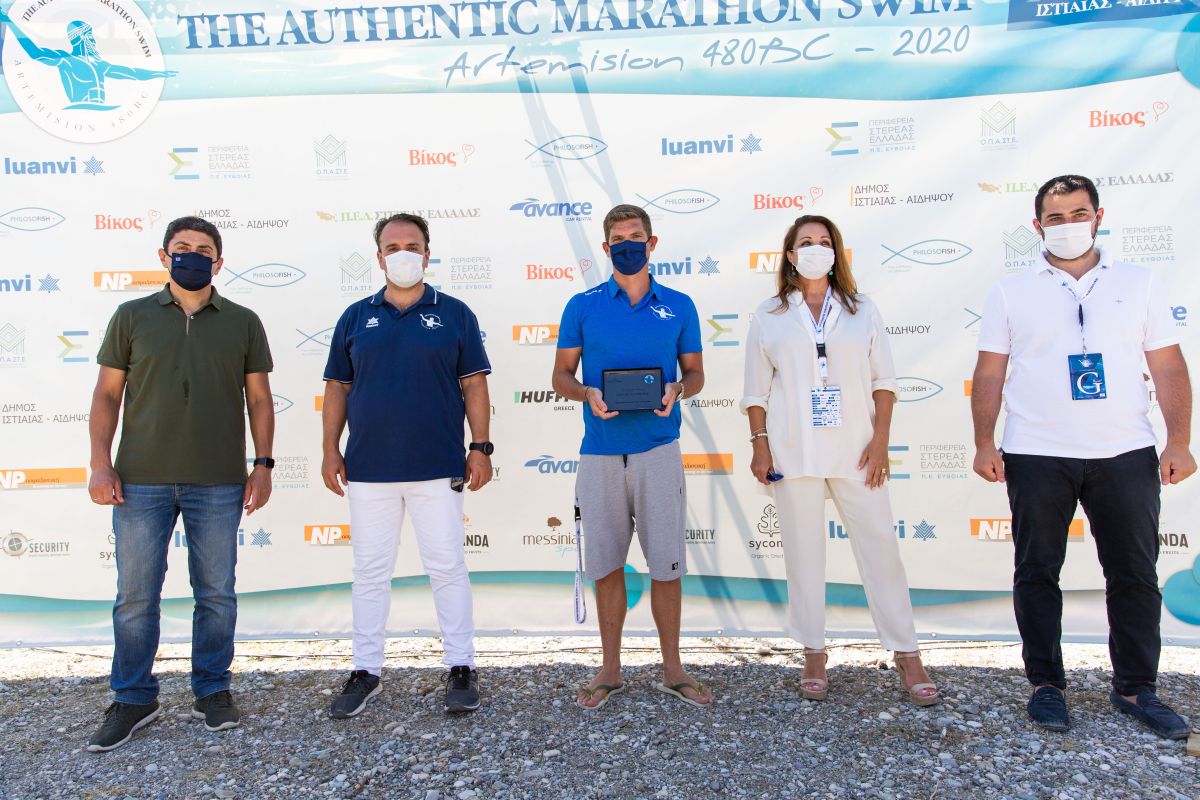 The Authentic Marathon Swim revived in Artemision, Evia, 2,500 years later, during September 4-6, with the participation of amateur and professional swimmers from Japan, Russia, Great Britain, Germany, Bulgaria and Greece.

They enjoyed the remarkable sporting event with utmost safety, uniting the legend with history, at Pefki, Evia of the Municipality of Istiaia – Edipsos. 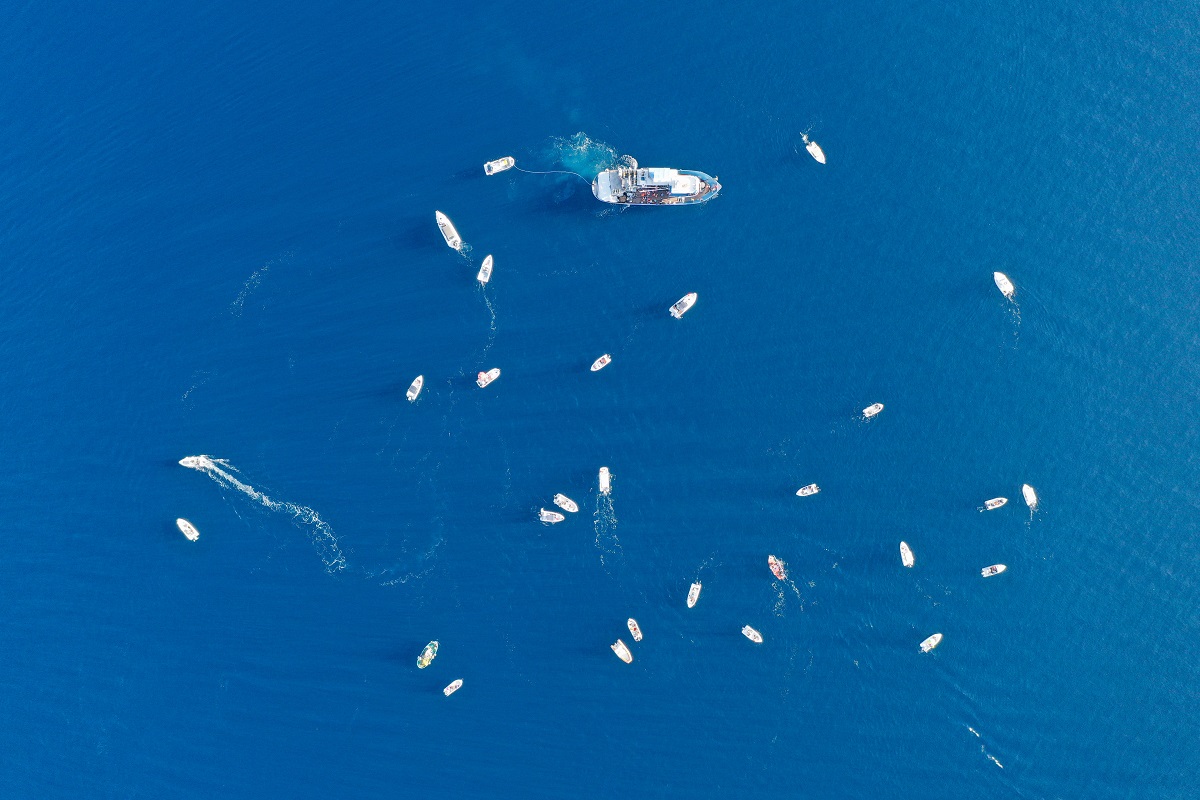 The demanding route took place at the straits of Artemision, connecting Central Greece with Thessaly and the regional units of Evia, Magnesia and Fthiotida, with the presence of the Deputy Minister of Culture & Sports, Mr. Lefteris Avgenakis, President of the Greek National Tourism Organization, Mrs. Angela Gerekou, Governor of Central Greece Region, Mr. Fanis Spanos and Mayor of Istiaia-Edipsos, Mr. Ioannis Kontzias. A common reference from all those honouring the event with their presence, was made for the absolutely successful compliance of the measures and the historic revival of the authentic swimming marathon route.

In the context of the races held, the Mayor of Istiaia-Edipsos, Mr. Kontzias, stated: “It was a special honour for our Municipality to revive this historic sporting event. With the principle of Plutarch’s ascertainment about the Naval Battle of Artemision “ἀρχὴ γὰρ ὄντως τοῦ νικᾶν τὸ θαρρεῖν” meaning “Courage is the beginning of victory” we faced the special conditions of our times with responsibility and emerged as winners. I would like to warmly thank the entire Greek state, the Greek National Tourism Organization, the Ministry of Tourism, the General Secretariat of Sports, the Hellenic Swimming Federation, the Region of Central Greece, the Regional Union of Municipalities of Central Greece and all sponsors who supported us in this effort from the first moment, recognizing the historical background of The Authentic Marathon Swim. Our goal is for the event to become an institution and to be repeated every year”. 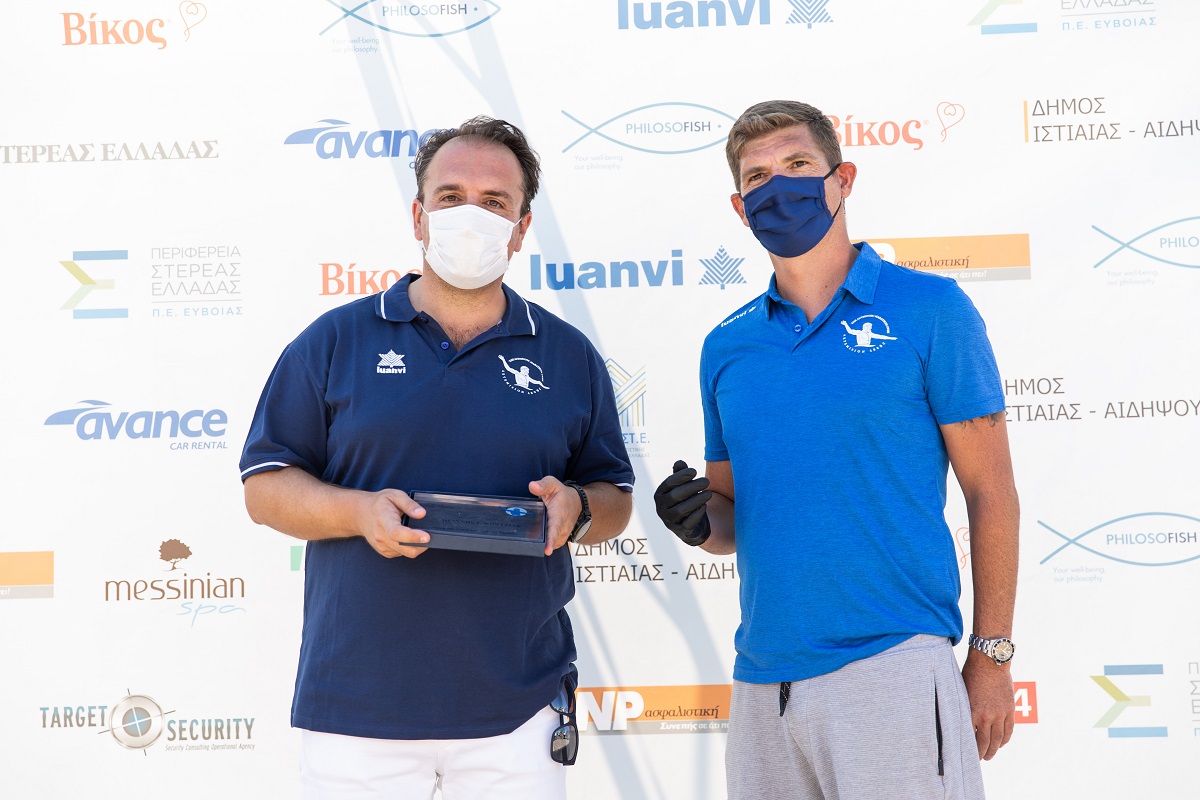 Honorary award to the Istiaia-Edipsos Mayor, Mr. Ioannis Kontzias for his idea and work by the silver Olympic medalist Spyros Gianniotis (photo by Dimitris Andritsos Photography @ The Authentic Marathon Swim)

The support of the local government

The Authentic Marathon Swim was honored by the presence of the silver Olympic medalist, world champion in open water swimming and member of the International Marathon Swimming Hall of Fame, Spyros Gianniotis. 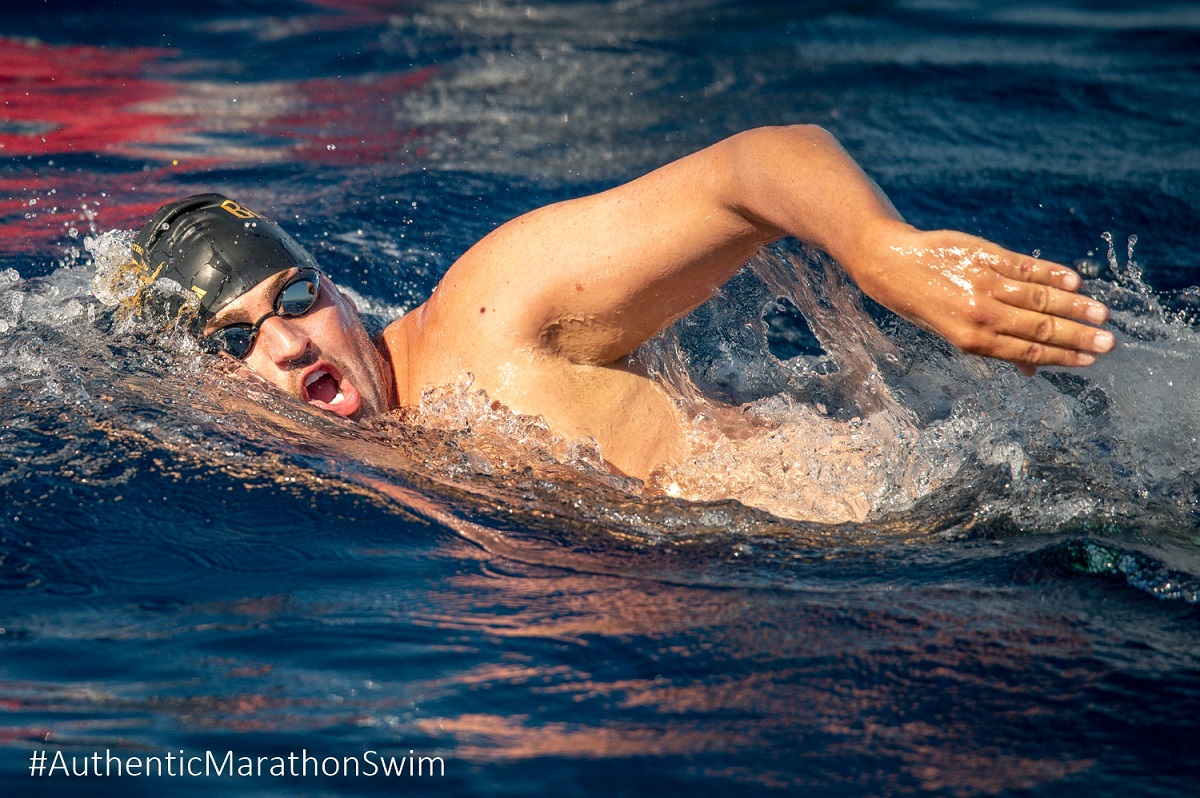 Among participating swimmers, the event had the Bulgarian Olympic champion Petar Stoychev with 4 Olympics participations, 11 consecutive titles in major international open water marathon swimming FINA series and the impressive achievement of being in the Ice Swimming Hall of Fame, the Japanese Olympic champion in Rio, Yasu Fukuoka and top names from Greece.

In the context of the races, Spyros Gianniotis, Nikos Gemelos, Petar Stoychev, Yasu Fukuoka, Vicky Kouveli, Marianna Lymperta and Sofia Psilolignou were honored for their presence, while the Mayor of Istiaia-Edipsos, Mr. Ioannis Kontzias was honored for his idea and work. 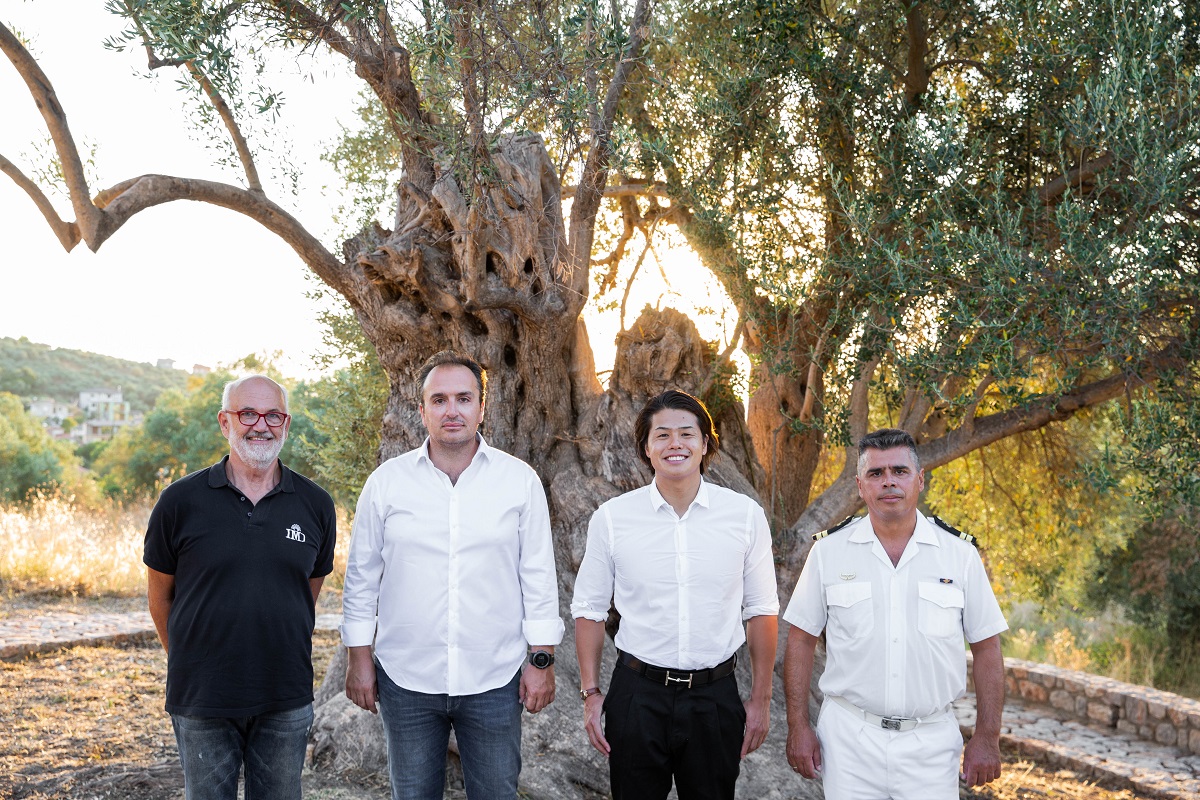 On Saturday, September 5, action began with the 3km open water swimming race, while the 1.5km race followed at Pefki beach.

Respectively, on Sunday, September 6, the event culminated with the revival of the authentic 10km marathon swimming route at the straits of Artemision. The event also included an 800m children’s race offering joy and smiles to dozens of kids. The warm-up of all athletes was held by the physical education instructor, Mandy Persaki.

The Authentic Marathon Swim, honoring the history of the region, held a symbolic event at the ancient settlement of Artemision where Mavroelia from Artemision or Olive Mavromandila can be found. It is a monument of nature and local history, one of the oldest olive trees in the world, dating back over 2,500 years. Winners of the routes were symbolically awarded with a branch of Mavroelia. 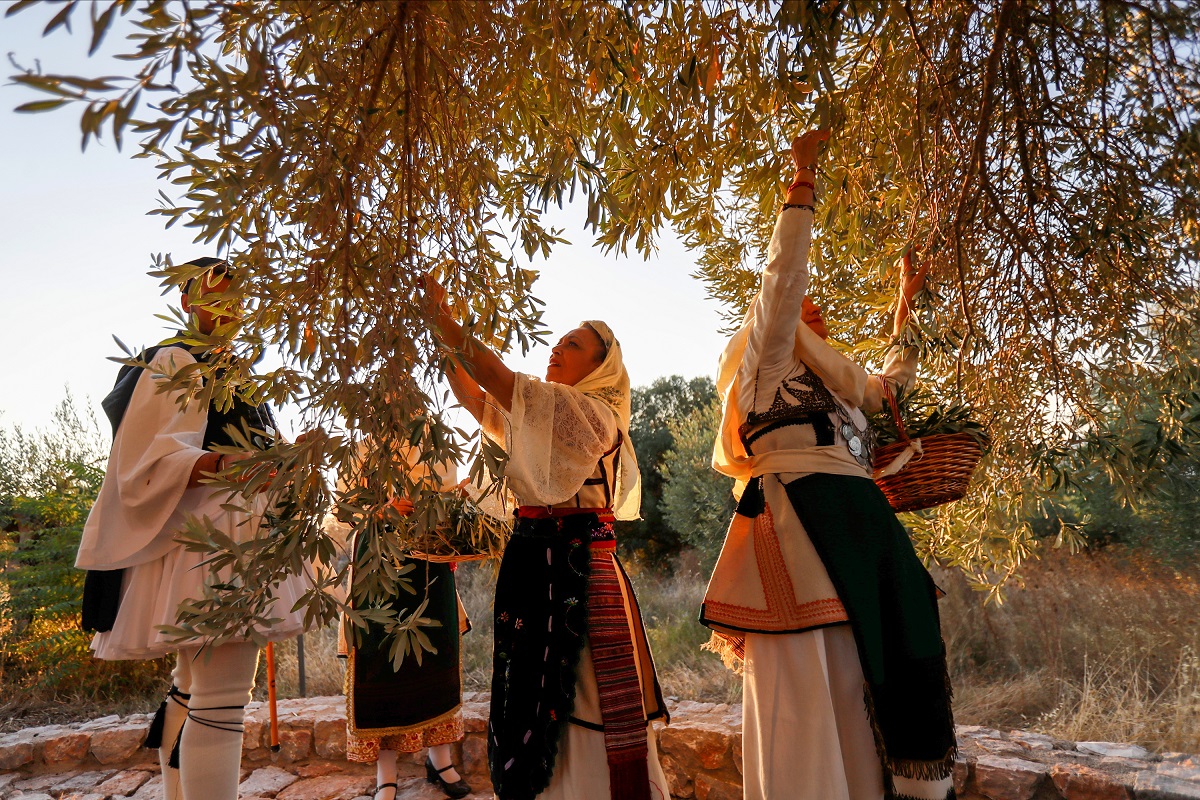 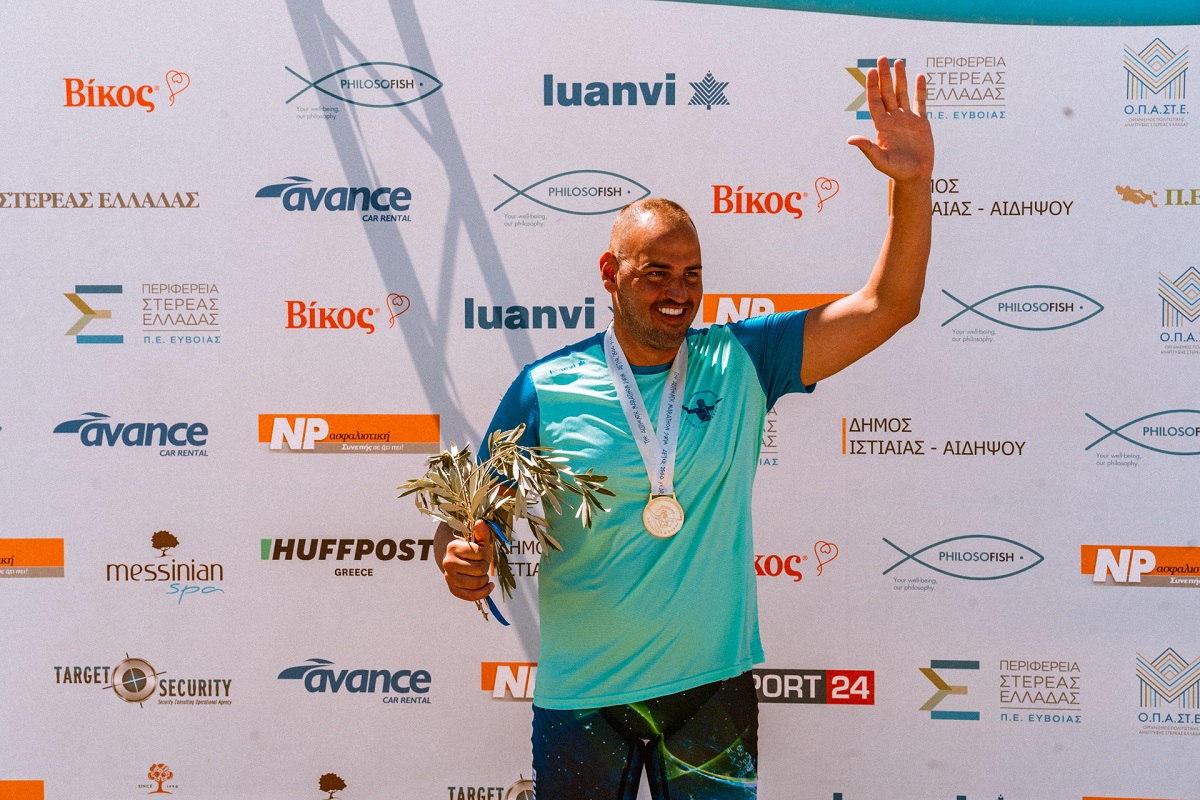 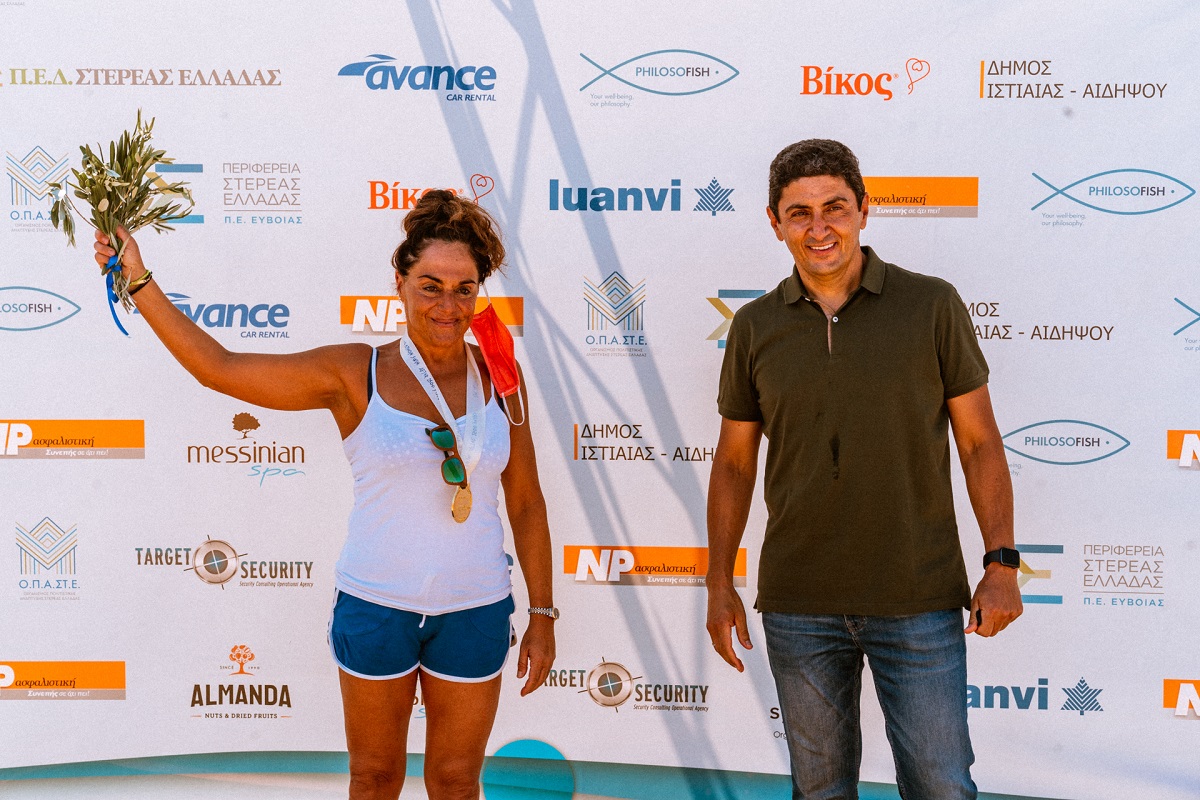 Individual awarding of athletes at the 10km race for the first time in the world at a sports event instead of the three winners all together – Vicky Kouveli awarded by the Deputy Minister of Culture & Sports, Mr. Lefteris Avgenakis (photo by Mike Tsolis @ The Authentic Marathon Swim)

The event was held in accordance with FINA regulations and the health protocol based on the instructions of the expert scientists-collaborators of the Hellenic Swimming Federation and recommendations of the Greek General Secretariat of Sports’ Health Committee, established by Active Media Group, ensuring the health of athletes and attendees.

The mandatory use of a mask by the staff and encouragement of its use by everyone with its free provision, the temperature measurements by the team of Target Security, although several athletes entered the venue with a mask showing a high sense of individual responsibility, the use of gloves where needed, the disinfection of all areas, equipment and office materials, the demarcation of a 2,000 square meters space through the use of railings, swimmers starting in different waves to avoid interactions while maintaining long distances between them, the isolation of foreign athletes in different hotels and their entry in Greece with PCR tests were just a few elements on the first page of the safety measures implemented. 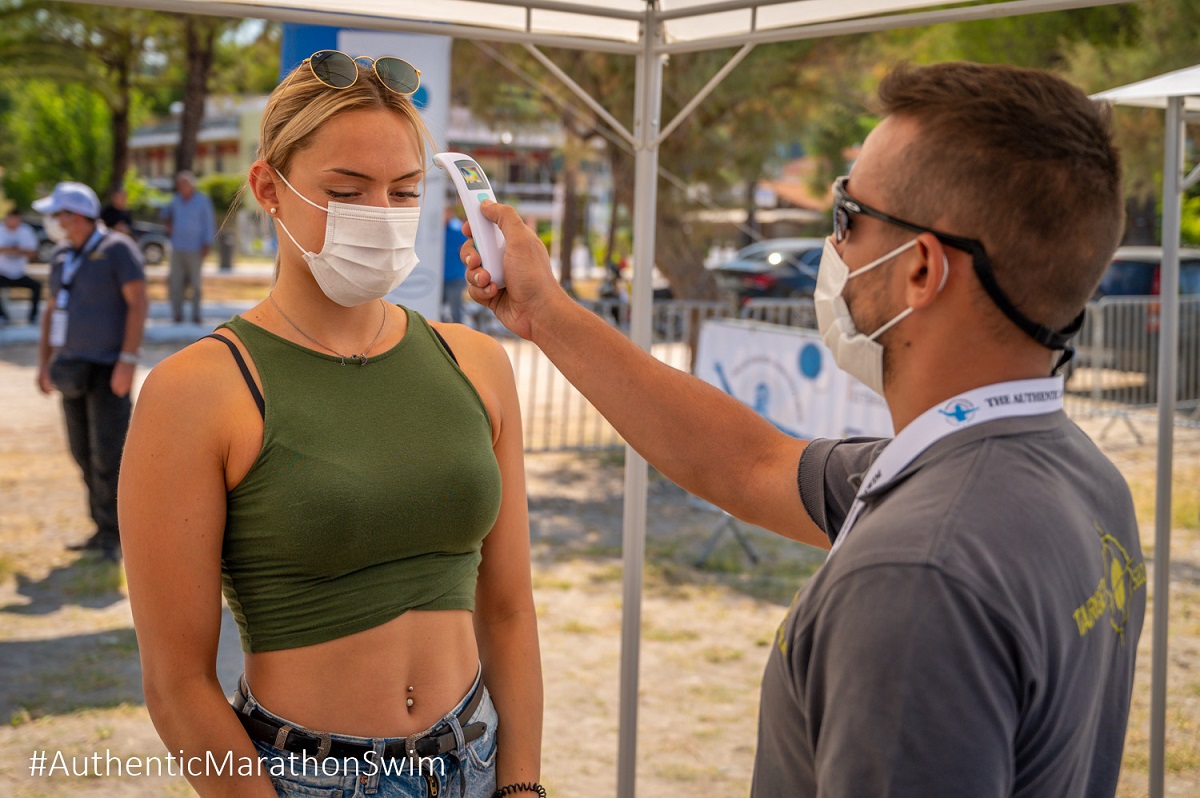 In the context of The Authentic Marathon Swim, Active Media Group Chief Executive Officer, Mr. Akis Tsolis stated: “With our experienced and certified staff from the World Health Organization, we put in action with absolute success, an even stricter health protocol than the one approved by the Hellenic Swimming Federation and the General Secretariat of Sports, taking all necessary measures for the safety of our participants. We created a recording system of outgoing and incoming people in order to always be aware, of the number of people that were present at the area of ​​the sports facility we built. Moreover, for the first time in the world, in these health conditions we experience, individual awarding was held for the 10km athletes. A huge effort was made by the organizing committee, the Municipality, the volunteers but above all by the participants who mostly came to the venue wearing masks.

We did not write history, because history was written 2,500 years ago in the naval battle of Artemision, in the Battle of Thermopylae and in the route swam by Hydna and Skyllias. We are adding to the glorious book of our place’s history; we are filling in the blank pages that are left from the authentic marathon swimming route 2,500 years ago, and we are opening a new chapter in the history of swimming and sports tourism”.

Safety throughout the races

All routes of The Authentic Marathon Swim were designed by the Greek national swimming coach with distinctions in Olympic Games & world open water swimming championships, Mr. Nikos Gemelos. The event prioritizing the absolute safety of its athletes, provided everyone with a safety lifeguard buoy since its use by professional and amateur athletes was mandatory. 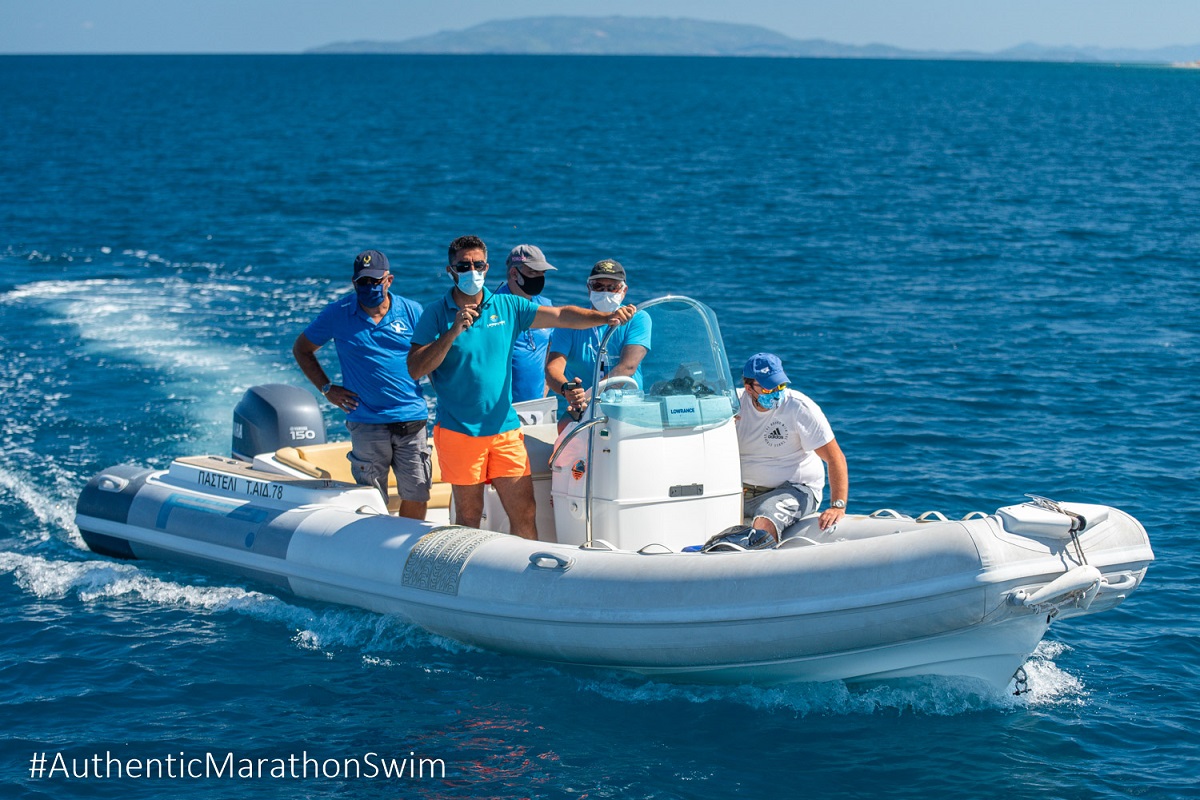 Supervision of the race by the Greek national swimming coach, Nikos Gemelos (photo by Elias Lefas @ The Authentic Marathon Swim)

On the 10km route each swimmer had an escorting boat next to him for safety reasons. Numerous lifeguards with boats and staff from Lifeguard Patrol and European Lifeguard School, contributed to the safety of the races with the support of the Hellenic Red Cross with Chalkida’s Regional Department and dozens of volunteers from the region who helped in the event’s smooth delivery. The judges of the race were appointed by the Hellenic Swimming Federation, which had given its approval for the organization of the event, while the Port Authority of Orei and the race’s doctor also supervised all athletes. 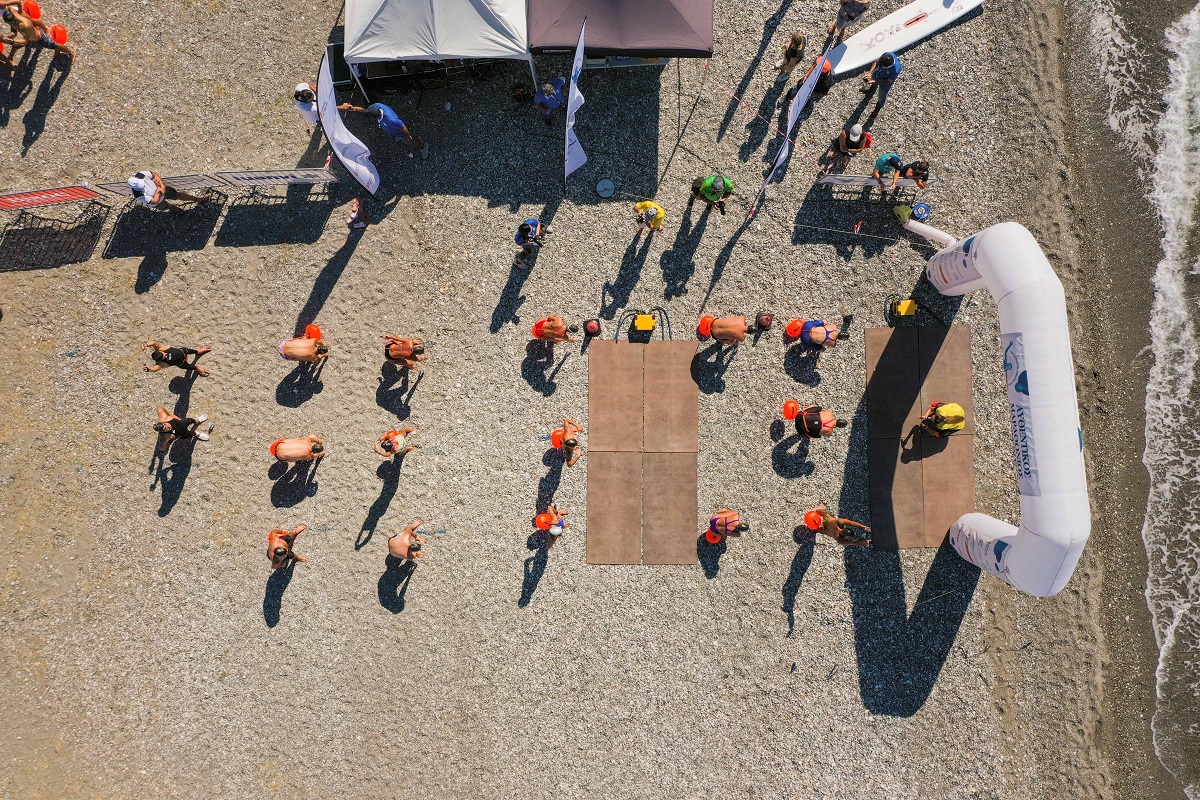 The Authentic Marathon Swim was held under the Auspices of the Greek National Tourism Organization, it was listed in the “Thermopylae-Salamis 2020” Anniversary framework, while joining the Greek actions of the #BeactiveHellas 2020 programme of the European Commission being held under the auspices of the General Secretariat of Sports. The event was co-organized by the Municipality of Istiaia-Edipsos Region of Central Greece, the Organization of Cultural Development for Central Greece (O.P.A.ST.E.) and the Regional Union of Municipalities of Central Greece, while Active Media Group was responsible for its sports production. 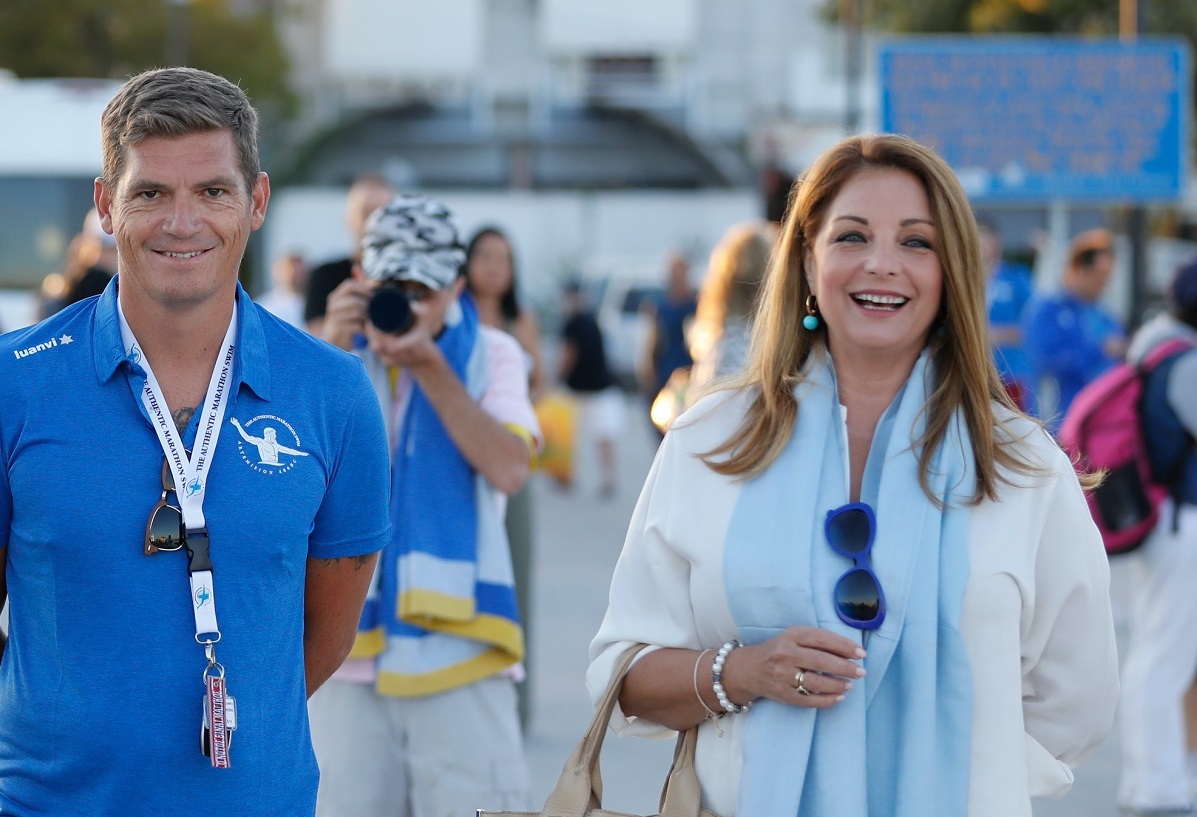 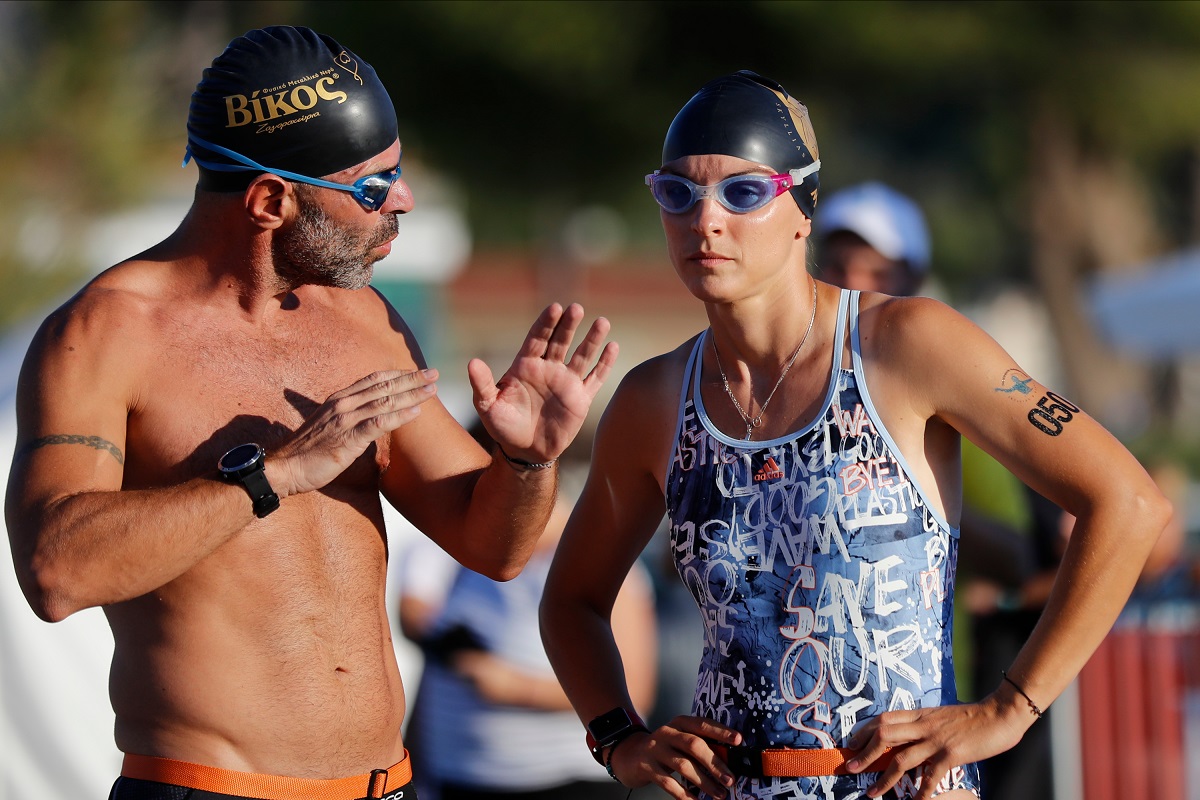 The event’s official hashtag #authenticmarathonswim created its own wave on social media brining unique images and videos from participants’ exciting moments in the Municipality of Istiaia – Edipsos.