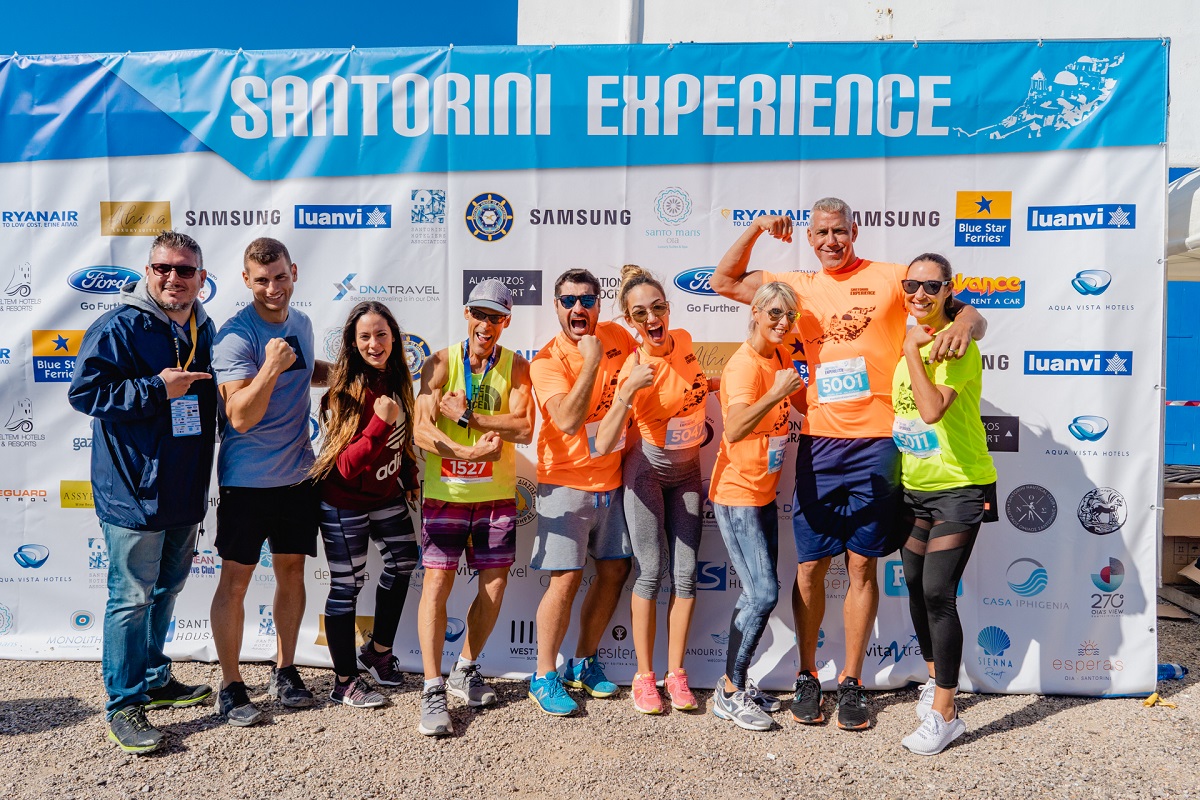 Professional and amateur athletes, as well as visitors, visited the enchanting island of Santorini in the Cyclades during October 5-7, 2018, to participate in the 4th “Santorini Experience 2018”.

The top sports tourism event in Greece was completed with absolute success and a record of participations in the running and swimming races gathering more than 6,000 visitors on Santorini. In fact, 60% of the visitors stayed on Santorini for more than 5 nights.

Participations from the 5 continents on Santorini! 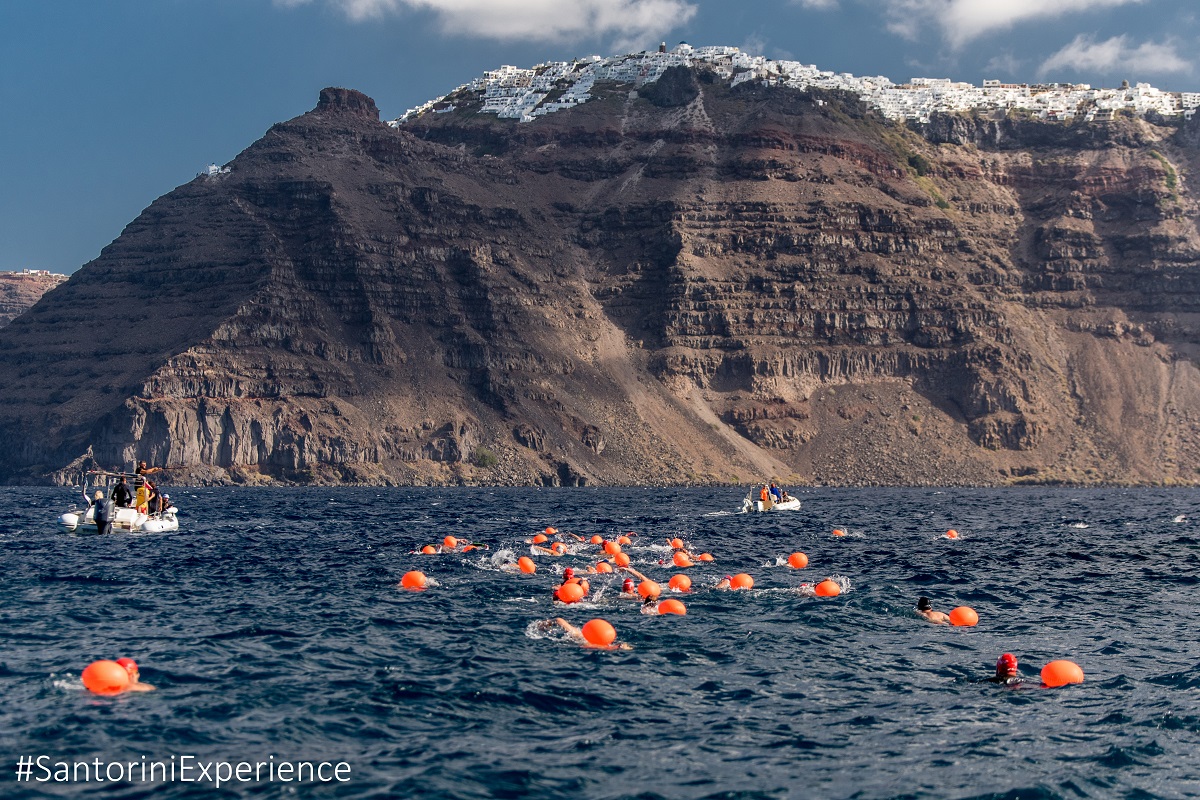 World class names as well as the elite of the Greek national open water swimming team were present!

The top Hungarian swimmer Attila Manyoki, who excels in open water swimming races with several successes and is a member of the International Marathon Swimming Hall of Fame (IMSHOF), returned for another year at the event that is member of the Global Swim Series (GSS). Along with him, the British twice silver Olympic medalist, at the Rio Olympics in 2016, Jazz Carlin swam for the first time, as well as the twin Greek expatriates racing with the colors of the national team of Netherlands, George and Timos Skotadis. The elite of the Greek national team along with top professional athletes had a dynamic presence in the swimming race. The national team consisted of George Arniakos, Dimitris Negris, Stellina Aplanti, Dejan Giovanovic, Dimitris Manios, Irene Diakoumakou, Maria Filopoulou, Maria Liossi, Anastasia Kyrili, Konstantinos Konstantineskou, Panagiotis Alogakos, Maria Kirykou, Triantafyllia Diakoumakou, Marianota Elmali and Melina Trochalaki. 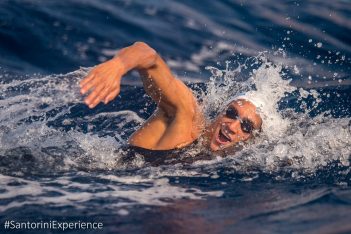 The federal coach and technical director of the 1.5 miles (2,4km) open water swimming by Vikos, Nikos Gemelos applied FINA’s regulations on Sunday, October 7th, and implemented the race with the approval of the Hellenic Swimming Federation, following all safety rules. At the same time, the event took care of the amateur athletes with the addition of the safety buoy, of high standards and quality. The swimmers started in two groups from the volcano ending their race at the old port of Fira, having the imposing view of the island in front of them. Men’s winner was Dimitris Negris, George Arniakos finished 2nd and Dejan Jovanovic in the 3rd place. In women, Olympic medalist Jazz Carlin was 1st, Irene Diakoumakou finished 2nd and Maria Filopoulou came 3rd. You can see the detailed results on the official page of the event (in the event there was an extra classification for those wearing wetsuits – wetsuit category) here.

In the safety of the race contributed the 50 specialized escorts in the water with the help of Lifeguard Patrol, which also had several lifeguard boats beyond its staff, the people of Santorini who assisted with their own boats, the Voluntary Lifeguards of Santorini, Atlantis Dive Center, Mediterranean Dive Club, Santorini Nautical Club and most of all the Boatmen Union Santorini that carried the athletes to the volcano and helped in the smooth implementation of the open water swimming race. 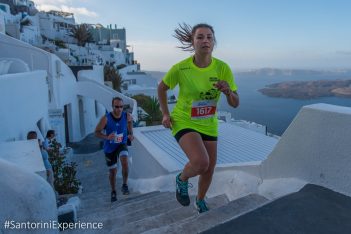 On Saturday, October 6, the 15km, 10km and 5km “Aristides Alafouzos” running races were held. All routes started from the desalination plant in Oia, with parts of trail track and a background of the magnificent images from the volcano overlooking the Caldera, as well as the settlements of Imerovigli, Firostefani, Oia and with a finish in Oia. The running routes are designed by the former marathon runner, Greek classic route record holder, running trainer and director of All About Running, Nikos Polias. “Santorini Experience” has joined the World’s Marathons global community. You can see the running results here:

It should be highlighted that many athletes decided to run for the joy of sports with no timing.

In terms of the social events, Municipal Sports Cultural Environmental Organization of Santorini (DAPPOS) hosted an open concert with the Greek-German artist FIONA, in the surrounding area of the Indoor Hall DAPPOS, on Saturday October 6. A little bit earlier the International Dancing Group of Santorini “Stamatina Xiarchou” & Association of Pontians Eptamyloi Serres “Akrites” opened the concert.

On Friday, October 5, on the occasion of Santorini Experience, Samsung (as the official technology partner), in cooperation with the local Kotsovolos store, organized the event “Kotsovolos and Samsung present the Hotel of the Future” at the conference hall of DAPPOS informing the island’s hoteliers of all the latest developments and the benefits of technology in their industry. Samsung enriched the experience of those participating and attending the event with the innovative Samsung Galaxy ecosystem services, such as the Samsung Galaxy S9 and S9+, coupled with the Gear 360, the Gear VR and unique 360 degrees content. 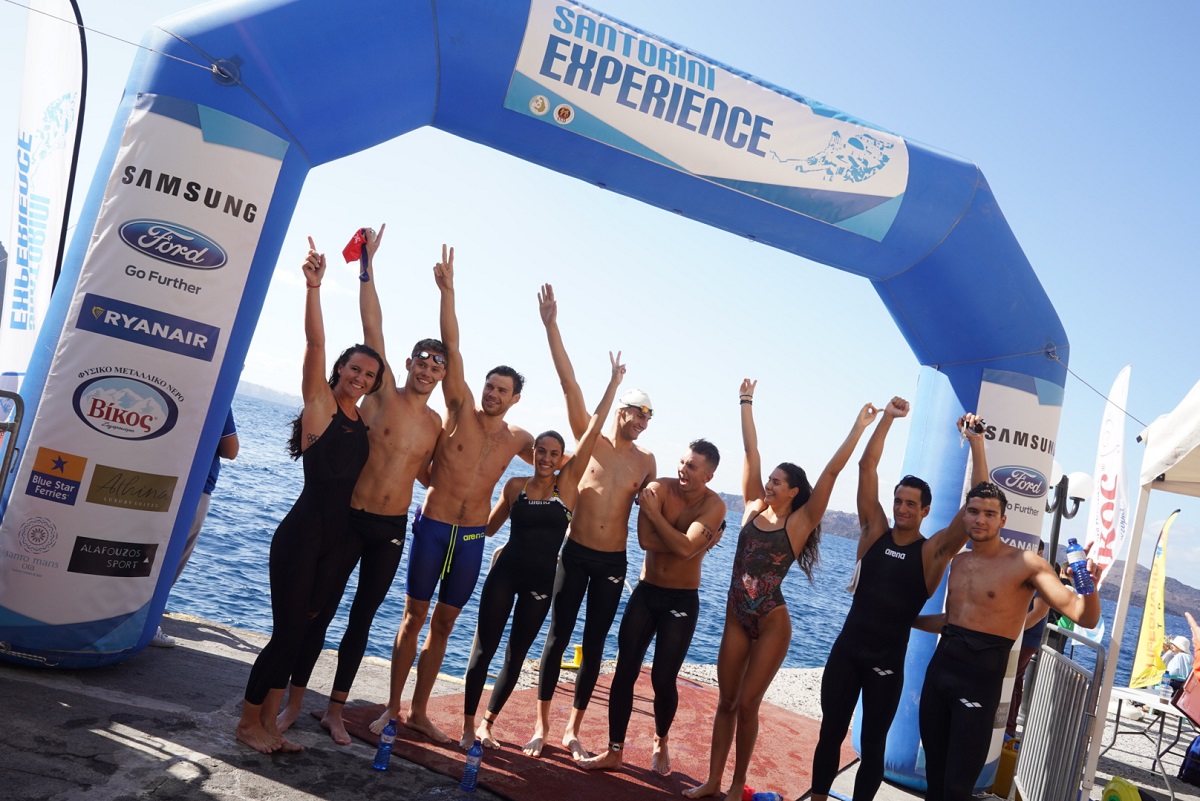 Participants traveled to “Santorini Experience”, with the official airline partner of the event, Ryanair, which offered the connection of Athens with Santorini with direct flights from abroad. The Greek leading shipping company Blue Star Ferries as a sponsor of the event facilitated the ferry connection offering a 50% discount on the ferry tickets and the participants’ vehicles, assisting a total of Greek and foreign athletes while offering an additional discount on the connection with the Cyclades and Dodecanese group of islands, resulting in participations from the islands of Paros, Naxos, Amorgos, Rhodes and others.

Ford Motor Hellas promoted sports and “fair play” by participating for the 4th year in the support team of “Santorini Experience”. Athletes and organizers moved with the safety and efficient Ford Motor Hellas cars, the official sponsor of the event. 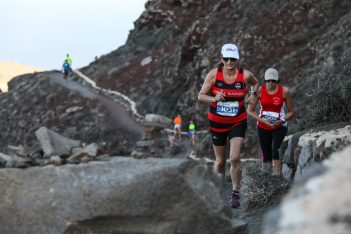 The organization innovated with its collaboration for the first time with Luanvi, the leading company in the sportswear industry in Spain. As the event’s official sports supplier, Luanvi offered an extremely innovative sports T-shirt to all participants.

DNA Travel, as the official transport partner of the event, facilitated the transportation of all participants and volunteers of “Santorini Experience”.

National Geographic was the official strategic partner of the event. 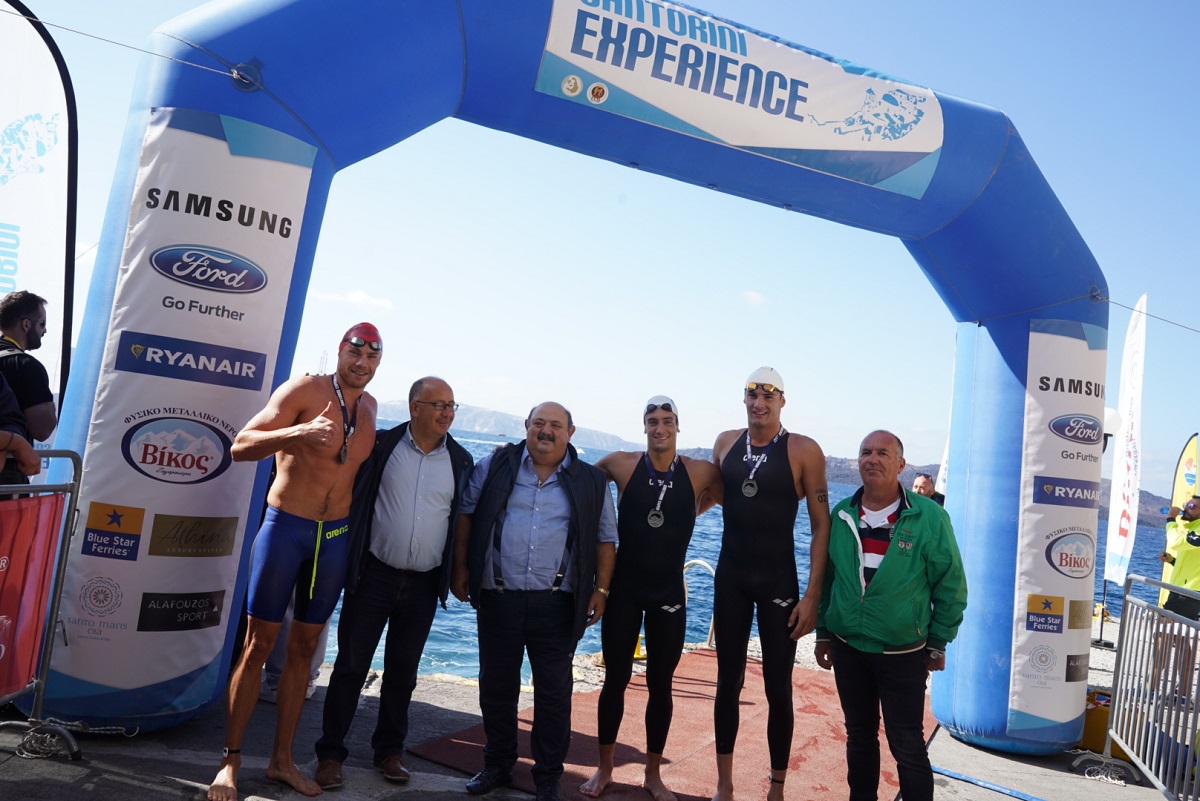 The event was assisted by Lifeguard Patrol, Assyrtico Wine Restaurant Café, Hellenic Recovery Recycling Corporation and the Department of Sports Organization & Management from University of Peloponnese. 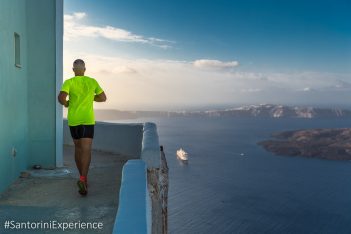 VitaNTravel, as the official travel agent of the event, took care and assisted all athletes and escorts with information about the ferry routes, ferry tickets, car rentals and accommodation

“Santorini Experience” is a co-organization of Municipality of Santorini, Municipal Sports Cultural Environmental Organization of Santorini (DAPPOS) and Active Media Group. The event was held under the auspices of the Greek National Tourism Organization and approved by the Hellenic Swimming Federation. More info here. 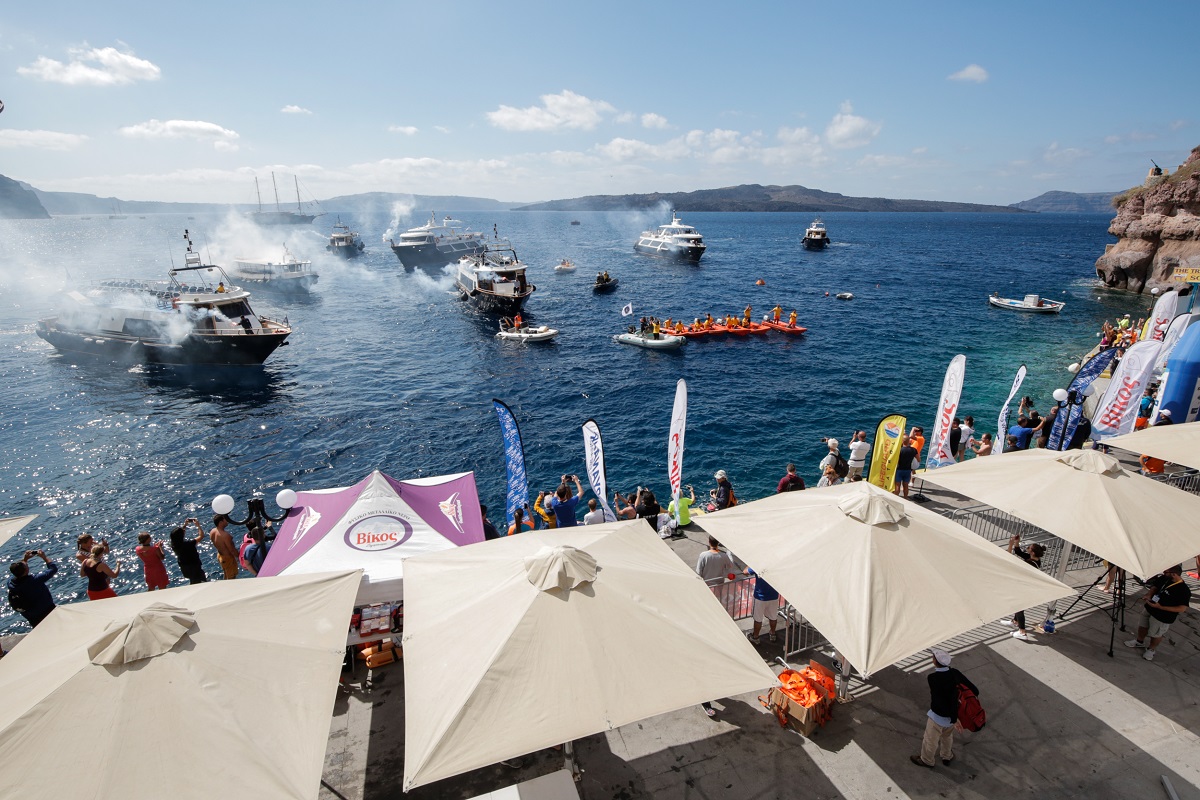 The Greek Travel Pages (GTP) is a communication sponsor of the Santorini Experience 2018.