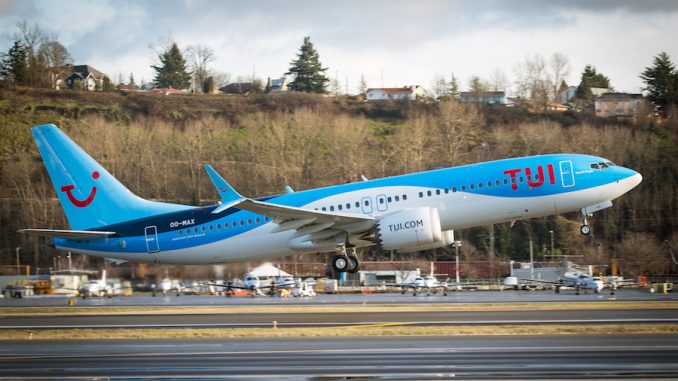 By the end of 2018, a total of nine 737 MAX 8 will be delivered to the airlines of TUI Group. These aircraft will be operated by TUI in Belgium, Sweden, the United Kingdom and the Netherlands.

“The objective of upgrading the fleet is to make flights more economical, cost-efficient and environmentally-efficient,” TUI said in an announcement.

Since 2013, TUI has ordered a total of 70 Boeing 737 MAX aircraft which are intended to replace aircraft currently in service.

The first 737 MAX for TUI fly Germany is scheduled to be delivered in early 2019. TUI Group has ordered 70 new aircraft in total to renew its narrow-body aircraft fleet by 2023 according to the current planning. After delivery of the first aircraft to TUI fly Belgium, there are 51 additional orders of the 737 MAX 8 and 18 orders for the 737 MAX 10.

TUI was the first European operator to select the latest and largest member of the 737 MAX family of airplanes. The TUI Group owns six European airlines in Germany, UK, the Netherlands, Belgium, Sweden and France. The TUI Airlines operate a fleet of 150 aircraft.

The TUI Group has set itself the goal of operating Europe’s carbon-efficient airlines by 2020.