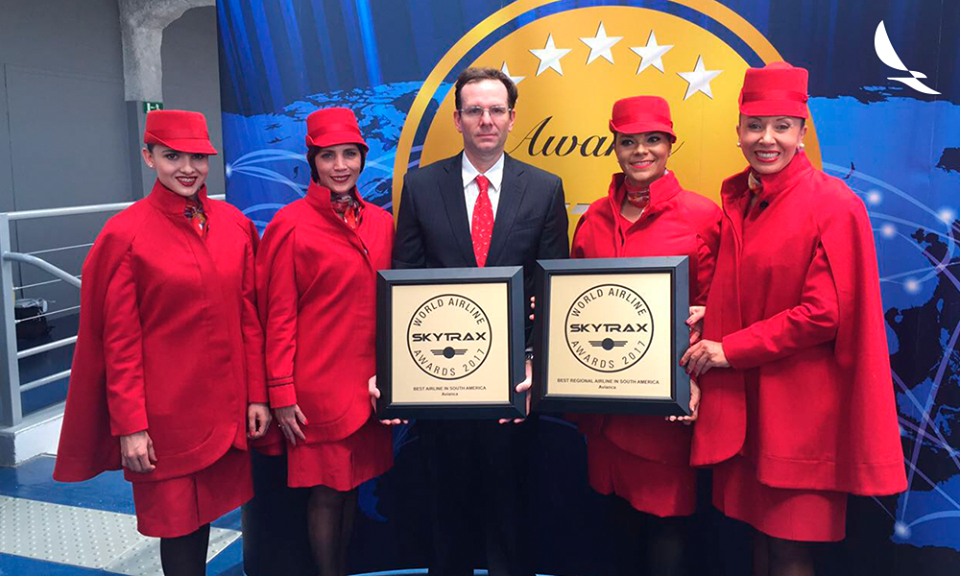 The Skytrax Awards, the most renowned awards in the international aviation industry, measure quality of service through a global satisfaction survey taken by 19.8 million travelers from 105 nationalities. The survey measures customer satisfaction based on their travel experience from ground service and airports to in-flight service on aircraft.

“This new acknowledgement from travelers, choosing Avianca as the Best Airline in South America, fills us with pride,” Avianca’s CEO and Executive President, Hernan Rincón, said.

“It is very rewarding to know that the efforts made to have a superior quality flight, service and travel product offer, are compensated with your preference, loyalty and acknowledgment. All of this makes us want to work harder in large projects and small details that help us offer a safe and pleasant trip”.

Avianca’s wins at the 2017 Skytrax World Airline Awards, follows its recognition as “Best Airline in Latin America in 2017” in the TripAdvisor Travelers’ Choice Awards for Airlines and its recognition as the second-best airline in the world by the Organization of Consumers and Users (OCU). Moreover, the airline’s effectiveness in communications and marketing was recognized during a contest that awards the best strategies of the year in this field. The Avianca News strategy won the Transportation, travel and Tourism category with a Gold Effie, while its Sounds That Connect campaign was awarded a Silver Efffie.

PayPal Survey: 99% of Greeks Recommend a Trip to Greece