Hundreds of people turned out for the Greek sports tourism event “Patmos Revelation” that took between June 30 and July 2 on the sacred island of Patmos in the Dodecanese.

In just its first year, the event was considered a great success and was applauded by participants and island residents for the organizational efforts of Municipality of Patmos, Region of South Aegean and Active Media.

More than 200 professional and amateur athletes of all ages from nine countries – Australia, England, France, Germany, Italy, Serbia, Switzerland, Turkey and Greece – visited Patmos to live the experience of the event by swimming in the Aegean waters and running in unique routes that passed through two UNESCO World Heritage Sites (historic center of Chora, Holy Monastery of St. John the Theologian and Sacred Cave of the Apocalypse).

The program of “Patmos Revelation” kicked off with Kids’ Athletics on Friday, June 30, at the football stadium of Patmos. The event was supervised by Olympic and World Champion Periklis Iakovakis and attracted the participation of a large number of children who got the chance to discover many secrets of the track and field sport.

On the second day of the event, Saturday, July 1, the open water swimming race was held at Grikos bay (1 mile/1.6km distance). The race was held under the auspices of the Hellenic Swimming Federation and the participation of the Greek national open water swimming team, headed by the European champion Antonis Fokaidis. The swimming route was designed by the Federal Technical Coach of Swimming Nikos Gemelos.

Right before the start of the race, pilates instructor Mandy Persaki held a “warm up” event.

During the third day of the event, Sunday, July 2, the running races of 15km, 5km and 1km (for children) were held with Skala as the starting point. The big winner of the 15km running route was the winner of the Rhodes marathon race, Michalis Chatziioannou, who crossed the finish line first, clocking the race at 1:01:34. According to experts and experienced runners, the 15km running route had a similar difficulty level of that of a marathon race. All routes were designed and planned out by the director of All About Running, Nikos Polias. Press here to see the total results of the 15km and 5km running routes. 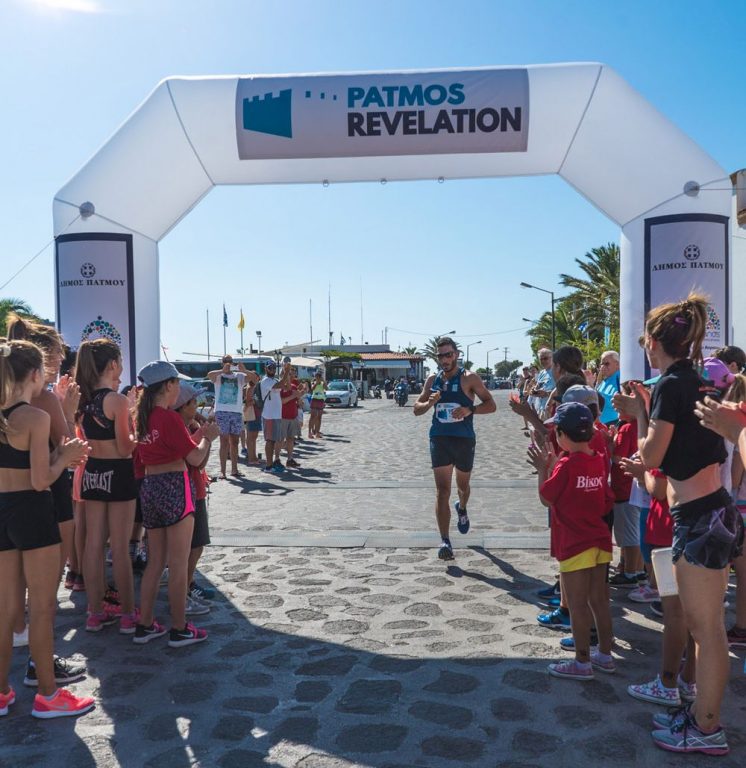 During an event held at the five-star hotel Patmos Aktis Suites & Spa, an official supporter of Patmos Revelation, commemorative gifts were given by Archimandrite Father Vartholomaios to the Federal Technical Director in Swimming Nikos Gemelos, by Patmos Mayor Grigoris Stoikos to World Champion Periklis Iakovakis and by Patmos Municipality Head of Tourism & Sports Giannis Skebes to European Swimming Champion of open water swimming, Antonis Fokaidis. The event was attended by the media, ambassadors and representatives from the Holy Monastery and Patmos Municipality.

The “Patmos Revelation”, which was held under the auspices of the Greek National Tourism Organization (GNTO), attracted many supporters that each contributed in their own way and helped the event run smoothly.

Patmos Police Station, Patmos Port Authority, Patmos Health Center as well as the many volunteers, rescuers and Lifeguards Corps of Hellenic Red Cross Kos helped contributed to the smooth implementation of the races.

The Greek Travel Pages (GTP) was among the communication sponsors of the event.