TV channel FOX Sports of FOX Networks Group, one of the biggest sports television networks in the world, will broadcast the “Santorini Experience 2016” sports documentary on June 19 to millions of homes in Europe, Asia and Africa. Viewers in Greece can tune in to NOVA to “live” the experience.

“Santorini Experience”, the sports tourism event that has won the hearts of friends of sport and professional and amateur athletes, is returning to the volcanic island during October 6-8. For a third year in a row, fans of swimming, running and of Santorini will get to experience breathtaking views, challenging routes and a rewarding experience.

“Santorini Experience” will take place under the co-organization of the Municipality of Santorini, DAPPOS and Active Media Group and be held under the auspices of the Greek National Tourism Organization (GNTO) and the Hellenic Swimming Federation (ΚΟΕ).

“We are delighted to welcome the 3rd ‘Santorini Experience’ this year! This sports event has become an establishment for our island and even more visitors are looking forward and arrange their holidays around it,” Mayor Zorzos said.

During his speech, the mayor informed that the 5 km route will be named “Aristides Alafouzos”. “The route begins from the desalination factory of Oia, which was donated to the island’s inhabitants by this great man. This action is a minimum tribute to the late Aristides Alafouzos and the beginning of other acts of our gratitude to be expressed in the future,” he said.

On his part, the president of ΚΟΕ, Dimitris Diathesopoulos, underlined the importance of the event for sports tourism in Greece.

“The event is part of the sport tourism, which our country needs and in combination with the venue, the beautiful Santorini, gives an incentive for an important event that goes beyond the limits of Greece and is now becoming an international sport and tourism event,” he said. The event will see the participation of the whole national swimming team and top athletes in open water.

According to the organizers, the event’s official airline partner Ryanair has played an important part in the success of the “Santorini Experience”. The carrier’s direct Athens – Santorini flights are connected with 13 cities abroad. 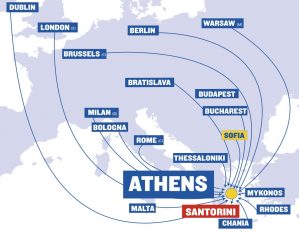 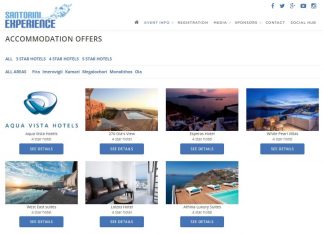 “Santorini Experience” is the first sports tourism event in Greece with an online special section on its website for partner hotels, aiming to attract more participations and this way contribute to Greece’s booming tourism industry. According to the organizers, in almost one month since the opening of registrations, 80 percent of participations are from Russia, Austria, Italy and Germany.

Further information regarding the event’s schedule of activities and the hospitality packages of sponsors will be announced in the following weeks.

Registrations can be made directly here.