New Owner to Take Over Capsis Hotel on Rhodes 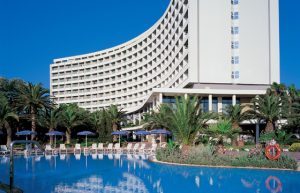 The historic luxury Capsis Hotel on Rhodes has now slipped into the ownership of entrepreneur Nikos Koutras for the amount of 30 million euros.

Five parties had expressed interest in the five-star unit on the Dodecanese island of Rhodes, including Lampsa Hellenic Hotels, Daskalantonakis Group, Stamatiadis Group and Peter Iliopoulos.

The 700-room hotel which was built in the ‘70s and hosted VIPs from across the globe was handed over to owner Eurobank in November 2011 by the managing Capsis family due to liquidity problems.

Located in Ialissos, 5km from the city of Rhodes, it consists of five main buildings with a total of 691 rooms and some 1,820 beds. The hotel however is known for its massive conference facility, which can accommodate up to 8,000 delegates and is one of the largest in Europe.

The agreement has yet to be finalized with the preferred buyer, who is also active in the hotel business.

Electric Train to Connect Piraeus to Athens Airport in June