Greek Mayors Call for Decongestion of Islands from Refugees 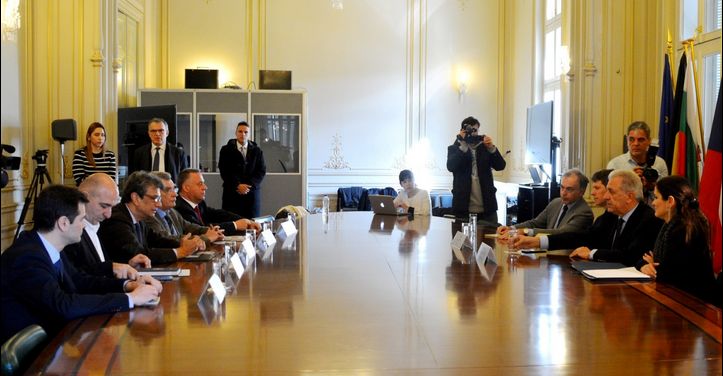 The possibilities of improving the situation in the eastern Aegean islands due to refugee flows were discussed in Athens on Friday between EU Commissioner for Migration, Home Affairs and Citizenship, Dimitris Avramopoulos and the mayors of Lesvos, Chios, Samos, Kos and Leros.

According to reports, the five mayors –Spyros Galinos (Lesvos), Michalis Angelopoulos (Samos), Manolis Vournous (Chios), Yiorgos Kyritsis (Kos), Michalis Kolias (Leros) — found the meeting to be “constructive” and requested the immediate decongestion of the islands in view of the tourism season, especially from vulnerable migrant and refugee groups and individuals with delinquent behavior that “create insecurity among residents”.

“The recent unexpectedly harsh weather conditions have exposed the needs that have to be addressed as a matter of urgency”, Commissioner Avramopoulos said, adding that winterised shelters, already funded by the European Commission, have to urgently be installed by the UNHCR.

He also said that the islands coordinators have to immediately take over their tasks and cooperate with the local authorities. “All means to alleviate the pressure from the islands including measures of financial support have to be discussed with the Greek government”, he said.

“The implementation of the EU-Turkey Statement has to be accelerated and measures to enhance security on the islands have to be taken”, he added.

He reassured the mayors that the European Commission stands by Greece and its islands — as it stands by other affected countries — and he expressed the Commission’s gratitude to the inhabitants of the islands who have shown “enormous altruism and humanity” since the beginning of the migratory crisis.

Commissioner Avramopoulos invited the five Greek mayors to Brussels in one month from now to take stock of the progress on the ground.

The five mayors have requested to meet with Prime Minister Alexis Tsipras on Monday and are planning meetings with leaders of other Greek political parties.