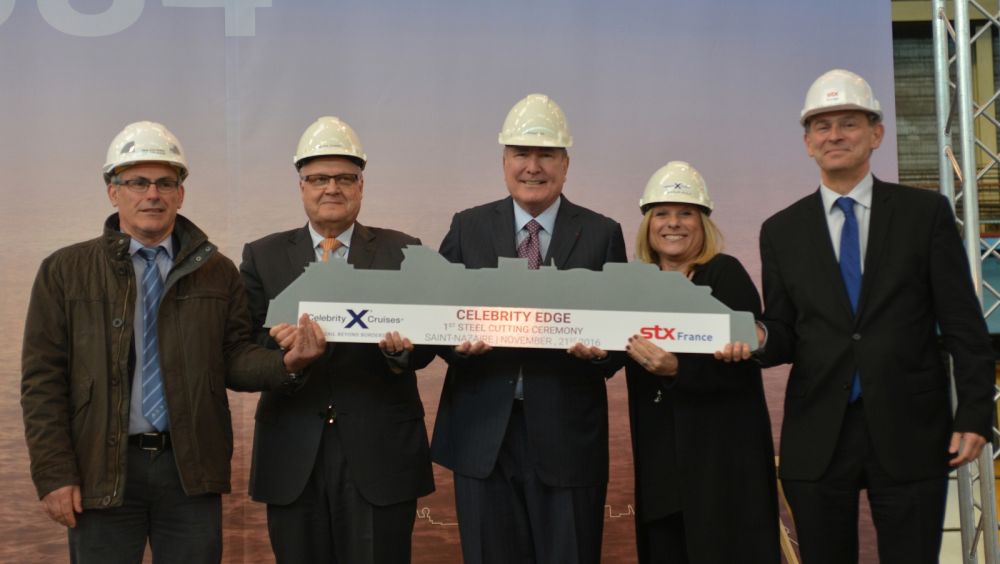 “We set the bar high for the architects and designers on Edge class, and we were rewarded with a stunning design”, Lisa Lutoff-Perlo, Celebrity’s President and CEO, said during the ship’s steel-cutting event.

“Cutting the ship’s first piece of steel is the traditional first step in the shipbuilding process, and I’m excited to see our dreams turn into reality over the next 24 months”, she said, adding that more details will be revealed soon.

“Travelers, trade partners and enthusiasts alike will not be disappointed — this ship is going to be amazing”, Lutoff-Perlo said.

The company expects delivery of Celebrity Edge in Fall 2018.

The modern luxury cruise line also announced the name of Edge’s sister ship, Celebrity Beyond, scheduled for delivery in Spring 2020. The third and fourth Edge Class ships are expected to be delivered in Fall 2021 and Fall 2022, respectively.

“Edge Class is destined to be a trailblazer in modern luxury travel”, said Richard D. Fain, Chairman and CEO of Royal Caribbean Cruises.

“The new ships will be on the cutting edge of innovation and the leading edge of design, so the ship names are spot on and offer a sense of how Celebrity Cruises is looking into the future”, Fain said.

Celebrity currently has 12 ships that offer cruises across seven continents. It is one of six cruise brands operated by Miami-based Royal Caribbean Cruises.