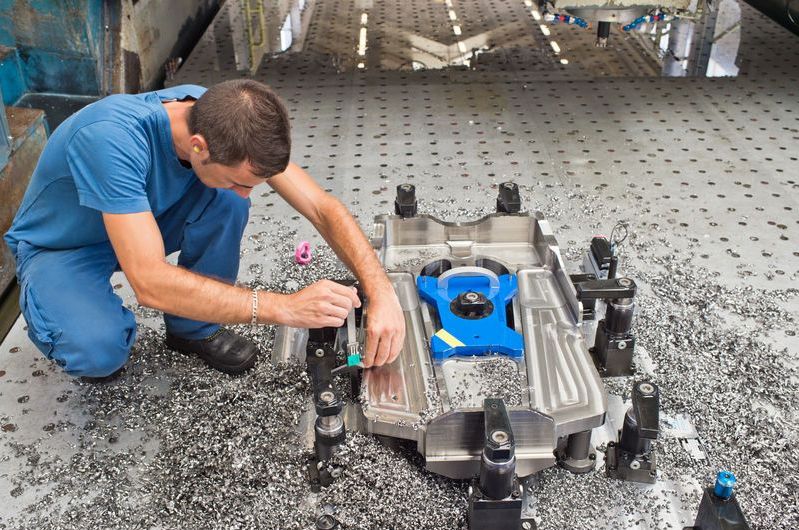 The A330neo (new engine option) is “coming to life” as metal-cutting activities are underway at Airbus’ production facilities in Saint-Eloi (Toulouse) and Nantes, France – including machining for the first engine pylon. Photo © GOUSSE HERVE

Airbus’ first A330neo (new engine option) is coming to life one year after the program was launched, with the first “cutting of metal” underway at its production facilities in Toulouse and Nantes. Machining of the first engine pylon started during the summer at Airbus’ facility in Saint-Eloi (Toulouse), while Airbus’ Plant in Nantes began production of the first A330neo centre wing box.

Among the first Airbus metal-cutting operations underway for the A330neo (new engine option) jetliner is production of the initial centre wing box, which uses an innovative Isogrid design with 330 triangular pockets that enable the component to meet rigidity, strength and lightweight requirements.

The first A330neo Centre Wing Box rib 1 produced in Nantes uses an innovative Isogrid design with 330 triangular pockets which enables the part to meet all our rigidity, strength and low weight requirements.

The all-new pylon produced in Saint-Eloi is a key element in the A330neo’s innovative design, attaching the latest generation, fuel-efficient Trent 7000 engines to the wings. Made out of light weight titanium, the A330neo pylon uses cutting-edge aerodynamics, materials and design technologies derived from the A350 XWB. The A330neo pylon will be fitted with a new A350 XWB inspired fairing made from composite materials and titanium for ensuring optimised aerodynamics.

The A330-800neo and the A330-900neo are two new members of the Airbus Widebody Family with first deliveries scheduled to start in Q4 2017. The A330neo incorporates latest generation Rolls-Royce Trent 7000 engines, aerodynamic enhancements and new cabin features.

Benefitting from the unbeatable economics, versatility and high reliability of the A330, the A330neo reduces fuel consumption by 14 percent per seat, making it the most cost efficient, medium range Widebody aircraft on the market.

In addition to greater fuel savings, A330neo operators will also benefit from a range increase of up to 400 nautical miles and of course all the operational commonality advantages of the Airbus Family.