Athens Livens Up as ‘Summer in the City’ Events Kick Off 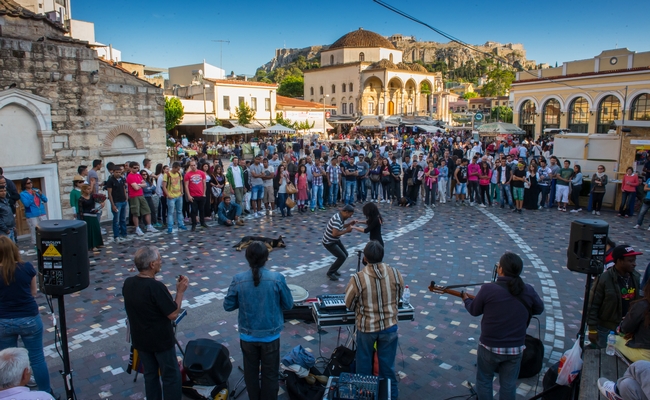 Athens’ squares, pedestrian walkways, theaters and neighborhoods will liven up this summer with over 150 cultural events, including everything from Afghan music and cool swing to poetry nights and Greek theater, taking place across town as part of the municipality’s “Summer in the City” program, which kicks off on Sunday, June 14.

Athens Mayor Giorgos Kaminis presented the three-month series of events, organized by the Athens Cultural, Sport & Youth Organization (OPANDA), during a press conference on Thursday, at the municipal cultural center.

“These events aim to bring to the forefront many of the city’s areas and to transform Athens’ neighborhoods into attraction points of theater, entertainment and recreation. We are spreading out and coming closer to more and more city residents,” the mayor said.

“We hope through the concerts, performances and tributes to bring out the creative forces of our city.”

Among the highlights of the “Summer in the City 2015” program are events and concerts to be held at the Kolonos Open Theater and in the courtyard of the National Archaeological Museum as well as the “New Points of Culture in the City”, “Music Trails Athens’ Neighborhoods”, “Cultural Mondays Atop Strefi Hill”, “Shadow Puppet Theatre in Athens”, the 7th Athens School Festival, European Music Day and the 5th Athens Open Air Film Festival and a large number of concerts featuring popular Greek performers.

A part of the revenues will go towards the city’s homeless.

“Summer in the City” will come to a close in September with the Athens Open Air Film Festival featuring over 20 film screenings at Athens’ open air cinemas (therina cinema) from June 17.

For the whole “Summer in the City” program (in Greek), press here.